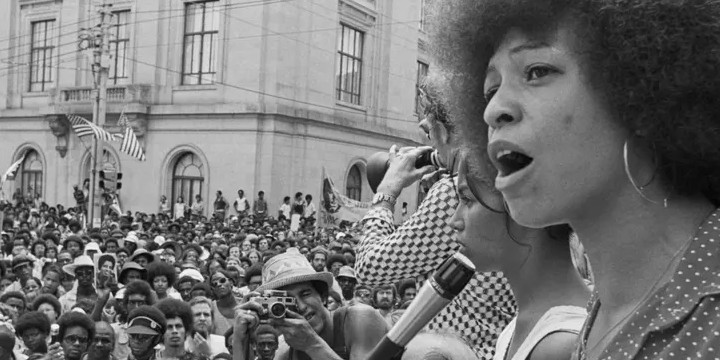 These top 50 Angela Davis quotes will motivate you to take a stand and make your own mark in the world!

Angela Davis is best known for her work as a radical African American educator and civil rights and social justice activist. Growing up, she had direct experience with racial prejudice. This became a solid foundation for her to improve the social and political conditions of Black people in the United States.

If you want to know more about this remarkable woman, read the inspiring quotes below that’ll provide you with many insights!

Make sure to share this with your friends to help them feel empowered!

And don’t forget to read these Audre Lorde quotes and Malcolm X quotes.

1. “We have to talk about liberating minds as well as liberating society.”

2. “To understand how any society functions you must understand the relationship between the men and the women.”

4. “You have to act as if it were possible to radically transform the world. And you have to do it all the time.”

5. “No march, movement, or agenda that defines manhood in the narrowest terms and seeks to make women lesser partners in this quest for equality can be considered a positive step.”

6. “I believe in making contradictions productive, not in having to choose one side or the other side. As opposed to choosing either-or, choosing both.”

7. “Justice is indivisible. You can’t decide who gets civil rights and who doesn’t.”

8. “The process of empowerment cannot be simplistically defined in accordance with our own particular class interests. We must learn to lift as we climb.”

9. “We know the road to freedom has always been stalked by death.”

10. “Sometimes we have to do the work even though we don’t yet see a glimmer on the horizon that it’s actually going to be possible.”

12. “If they come for me in the morning, they will come for you in the night.”

13. “Revolution is a serious thing, the most serious thing about a revolutionary’s life. When one commits oneself to the struggle, it must be for a lifetime.”

14. “We should seek out all the doors which still remain ajar, however slight the opening might be.”

15. “The idea of freedom is inspiring. But what does it mean? If you are free in a political sense but have no food, what’s that? The freedom to starve?”

16. “It is important not only to have the awareness and to feel impelled to become involved, it’s important that there be a forum out there to which one can relate, an organization—a movement.”

17. “It is in collectivities that we find reservoirs of hope and optimism.”

18. “Progressive art can assist people to learn what’s at work in the society in which they live.”

19. “I think that has to do with my awareness that in a sense we all have a certain measure of responsibility to those who have made it possible for us to take advantage of the opportunities.”

20. “Human beings cannot be willed and molded into non-existence.”

22. “Feminism insists on methods of thought and action that urge us to think about things together that appear to be separate, and to disaggregate things that appear to naturally belong together.”

23. “Feminism has to involve a consciousness of capitalism and racism and colonialism and post colonialities and ability and more genders than we can even imagine, and more sexualities than we ever thought we could name.”

24. “Black feminism emerged as a theoretical and practical effort demonstrating that race, gender, and class are inseparable in the social worlds we inhabit.”

25. “I often like to talk about feminism not as something that adheres to bodies, not as something grounded in gendered bodies, but as an approach—as a way of conceptualizing, as a methodology, as a guide to strategies for struggle.”

Angela Davis Quotes to Give You Essential Knowledge on Racism

26. “Racism cannot be separated from capitalism.”

27. “If we do not know how to meaningfully talk about racism, our actions will move in misleading directions.”

28. “In a racist society it is not enough to be non-racist, we must be anti-racist.”

29. “The struggle against racism must be an ongoing theme of the anti-rape movement, which must not only defend women of color but the many victims of the racist manipulation of the rape charge as well.”

30. “We still have to struggle against the impact of racism, but it doesn’t happen in the same way. I think it is much more complicated today than it ever was.”

Great Angela Davis Quotes That Will Show Her Perceptions and Beliefs

31. “I think the importance of doing activist work is precisely because it allows you to give back and to consider yourself not as a single individual who may have achieved whatever but to be a part of an ongoing historical movement.”

32. “I don’t think it’s necessary to feel guilty. Because I know that I’m still doing the work that is going to help more sisters and brothers to challenge the whole criminal justice system, and I’m trying to use whatever knowledge I was able to acquire to continue to do the work in our communities that will move us forward.”

33. “As a Black woman, my politics and political affiliation are bound up with and flow from participation in my people’s struggle for liberation, and with the fight of oppressed people all over the world against American imperialism.”

35. “I believe profoundly in the possibilities of democracy, but democracy needs to be emancipated from capitalism. As long as we inhabit a capitalist democracy, a future of racial equality, gender equality, economic equality will elude us.”

36. “I try never to take myself for granted as somebody who should be out there speaking. Rather, I’m doing it only because I feel there’s something important that needs to be conveyed.”

37. “I never saw myself as an individual who had any particular leadership powers.”

38. “When Black women win victories, it is a boost for virtually every segment of society.”

39. “The work of the political activist inevitably involves a certain tension between the requirement that position be taken on current issues as they arise and the desire that one’s contributions will somehow survive the ravages of time.”

40. “But at the same time you can’t assume that making a difference 20 years ago is going to allow you to sort of live on the laurels of those victories for the rest of your life.”

41. “Invisible, repetitive, exhausting, unproductive, uncreative—these are the adjectives which most perfectly capture the nature of housework.”

42. “I don’t think we have any alternative other than remaining optimistic. Optimism is an absolute necessity, even if it’s only optimism of the will, as Gramsci said, and pessimism of the intellect.”

43. “As the violent face of sexism, the threat of rape will continue to exist as long as the overall oppression of women remains an essential crutch for capitalism.”

44. “Prison relieves us of the responsibility of seriously engaging with the problems of our society, especially those produced by racism and, increasingly, global capitalism.”

45. “Jails and prisons are designed to break human beings, to convert the population into specimens in a zoo—obedient to our keepers, but dangerous to each other.”

More Angela Davis Quotes for You to Enjoy

46. “Our histories never unfold in isolation. We cannot truly tell what we consider to be our own histories without knowing the other stories. And often we discover that those other stories are actually our own stories.”

47. “Well of course there’s been a great deal of progress over the last 40 years. We don’t have laws that segregate Black people within the society any longer.”

48. “But there’s a message there for everyone and it is that people can unite, that democracy from below can challenge oligarchy, that imprisoned migrants can be freed, that fascism can be overcome, and that equality is emancipatory.”

49. “What this country needs is more unemployed politicians.”

50. “Imprisonment has become the response of first resort to far too many of our social problems.”

Did Our Collection Teach You Anything About Freedom and Rights?

Angela Davis was involved in the Black Panthers and the Communist Party since she was young. With this, she dedicated her life to pursuing racial justice, freedom, and women’s rights. Aside from that, she lectured on prison reform throughout the world.

There have been many instances that challenged her, but they did not shake her resolve. Even today, she stands firm and shares her beliefs and advocacies with people, especially the youth.

Angela Davis went through a lot, but she did not let the madness of the world stop her from reaching out to those in need. She believes that change starts within us, and it is up to us to make that change that we want to achieve. We hope that her courage in the face of adversity was able to inspire you to do the same.

Which quotes are your favorites? Share them down in the comments section below.