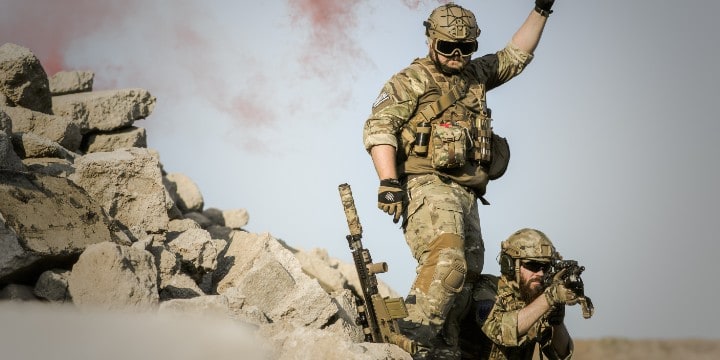 These battle quotes will give you the strength and courage to keep on fighting amidst life’s challenges!

Sometimes, just hanging in there until a miracle happens is half the battle. However challenging life becomes, the power and choice reside in you, and it is up to you to decide whether you will keep on fighting or just give up.

But, even if you’re given a choice, always remember that giving up isn’t the correct solution.

So, let these quotes serve as a reminder to fight wisely and effectively. Be the warrior you were meant to be!

And make sure to read these warrior quotes and war quotes.

1. “In every battle, there comes a time when both sides consider themselves beaten, then he who continues the attack wins.” – Ulysses S. Grant

2. “Choose your battles wisely. After all, life isn’t measured by how many times you stood up to fight. It’s not winning battles that makes you happy, but it’s how many times you turned away and chose to look into a better direction. Life is too short to spend on warring. Fight only the most, most, most important ones, let the rest go.” – C. JoyBell C.

3. “Nothing except a battle lost can be half so melancholy as a battle won.” – Arthur Wellesley

4. “Where the battle rages, there the loyalty of the soldier is proved.” – Martin Luther King, Jr.

5. “In preparing for battle I have always found that plans are useless, but planning is indispensable.” – Dwight D. Eisenhower

6. “The battle of getting better is never-ending.” – Antonio Brown

7. “Reason lost the battle, and all I could do was surrender and accept I was in love.” – Paulo Coelho

8. “The most critical time in any battle is not when I’m fatigued, it’s when I no longer care.” – Craig D. Lounsbrough

9. “Sometimes by losing a battle you find a new way to win the war.” – Donald Trump

10. “The hotter the battle, the sweeter the victory.” – Bob Marley

11. “A battle sometimes decides everything and sometimes the most trifling thing decides the fate of a battle.” – Napoleon Bonaparte

12. “Battles are won by slaughter and maneuver. The greater the general, the more he contributes in maneuver, the less he demands in slaughter.” – Winston Churchill

14. “A lost battle is a battle one thinks one has lost.” – Jean-Paul Sartre

Inspiring Battle Quotes to Bring Out Your Fighting Spirit

16. “You don’t always win your battles, but it’s good to know you fought.” – John Greenleaf Whittier

17. “You were born a winner, a warrior, one who defied the odds by surviving the most gruesome battle of them all—the race to the egg. And now that you are a giant, why do you even doubt victory against smaller numbers and wider margins? The only walls that exist are those you have placed in your mind. And whatever obstacles you conceive, exist only because you have forgotten what you have already achieved.” – Suzy Kassem

19. “There will come a time in your life when you lose something that matters to you. You’ll fight for it and you won’t win. But what really matters isn’t the war you’re waging, it’s that you don’t lose the person you are in the midst of the battle.” – J. Sterling

20. “There are always risks in battle. It’s a dangerous business. The trick is to take the right ones.” – John Flanagan

21. “Whenever we want to combat our enemies, first and foremost we must start by understanding them rather than exaggerating their motives.” – Criss Jami

22. “Sisters in battle, I am shield and blade to you. As I breathe, your enemies will know no sanctuary. While I live, your cause is mine.” – Leigh Bardugo

23. “The purpose of battle is to attain the greatest heights within your own limits.” – Yukito Kishiro

24. “Do battle with the challenges of your present, and you will unlock the prizes of your future.” – Andy Andrews

25. “Believe that you can whip the enemy, and you have won half the battle.” – James Ewell Brown Stuart

Powerful Quotes on Winning the Battle

26. “Don’t fight a battle if you don’t gain anything by winning.” – Erwin Rommel

27. “Always keep your foes confused. If they are never certain who you are or what you want, they cannot know what you are like to do next.” – George R.R. Martin

28. “If your enemy offers you two targets, strike at a third.” – Robert Jordan

29. “A battle won is a battle which we will not acknowledge to be lost.” – Ferdinand Foch

31. “There are more battles won through prayer than by any other means.” – Chuck Smith

33. “To win any battle, you must fight as if you are already dead.” – Miyamoto Musashi

34. “It is better to conquer yourself than to win a thousand battles. Then the victory is yours.” – Buddha

35. “A great strategy alone won’t win a game or a battle; the win comes from basic blocking and tackling.” – Naveen Jain

36. “Only a battle lost is sadder than a battle won.” – Robert Jordan

37. “The biggest battle is the war against ignorance.” – Mustafa Kemal Ataturk

38. “Where there is no peril in the fight, there is no glory in the triumph.” – Pierre Corneille

39. “No battle plan survives contact with the enemy.” – Colin Powell

40. “Battles are lost in the same spirit in which they are won.” – Walt Whitman

41. “You may have to fight a battle more than once to win it.” – Margaret Thatcher

44. “Be kind, for everyone you meet is fighting a hard battle.” – Philo

45. “There is no glory in battle worth the blood it costs.” – Dwight D. Eisenhower

Wisdom-Filled Quotes About Fighting Your Battles

46. “It’s strange, but once you learn to fight, you seem to attract enemies—sooner or later, those who master the art of combat must end up fighting.” – Nahoko Uehashi

48. “There’s a moment in fighting when the strength of muscle ain’t everything because the enemy has already given you enough energy to gain the victory.” – Toba Beta

49. “Everyone prepares for battle in his own way.” – Janet Morris

50. “Victory is always possible for the person who refuses to stop fighting.” – Napoleon Hill

Quotes to Give You Knowledge About Battles and Wars

51. “To stop a battle, a politician would propose a war.” – Jarod Kintz

52. “Every battle, every war is fought for things worth dying for.” – Arthur M. Jolly

53. “The best battle is the battle that is never fought. The best war is the war that is won without a battle.” – Frederick Lenz

54. “All you have the right to ask of life is to choose a battle in this war, make the best you can, and leave the field with honor.” – Leon Uris

56. “War consisteth not in battle only, or the act of fighting; but in a tract of time, wherein the will to contend by battle is sufficiently known.” – Thomas Hobbes

57. “In the battle that is philosophy all the techniques of war, including looting and camouflage, are permissible.” – Louis Althusser

58. “Know that we win the war when we pray in power because prayer is the battle.” – Stormie Omartian

59. “War is a quarrel between two thieves too cowardly to fight their own battle.” – Thomas Carlyle

Motivational Battle Quotes to Make You Stronger and Braver

60. “God gives His hardest battles to His toughest soldiers.” – Anonymous

62. “I firmly believe that any man’s finest hour, the greatest fulfillment of all that he holds dear, is that moment when he has worked his heart out in a good cause and lies exhausted on the field of battle—victorious.” – Vince Lombardi

63. “A battle is won by the side that is absolutely determined to win.” – Leo Tolstoy

64. “Carry the battle to them. Don’t let them bring it to you. Put them on the defensive and don’t ever apologize for anything.” – Harry S. Truman

65. “We shall heal our wounds, collect our dead, and continue fighting.” – Mao Tse-Tung

66. “The manner in which one loses the battle can sometimes outshine the victory.” – David Millar

67. “Battle is the most magnificent competition in which a human being can indulge.” – George S. Patton

68. “The legal battle against segregation is won, but the community battle goes on.” – Dorothy Day

69. “The hardest battle you’re ever going to fight is the battle to be just you.” – Leo Buscaglia

70. “All battles are fought by scared men who’d rather be someplace else.” – John Wayne

How Did You Manage to Win Every Battle You’ve Ever Fought?

Life is a battlefield, no matter how complex or easy a person’s life is. The reality is that once the war is won, there will be another battle to fight.

At times, it’s tempting to give up and throw in the towel, but is it worth it after everything you’ve been through? We may be tired and discouraged, but take advantage of the opportunity to reroute your plans and strategy.

Remember that life’s battles come in all shapes and sizes. These challenges and difficulties are unavoidable because life is naturally made up of highs and lows that will shape us into better individuals. We must accept this and fight them with all of our might.

Hopefully, our collection was able to inspire you to face your battles with courage and determination. If you need a reminder of these things, feel free to reread this list. Don’t forget to share them with your family and friends who need a boost, too!

Which quotes are your favorites? Please, join the discussion below.