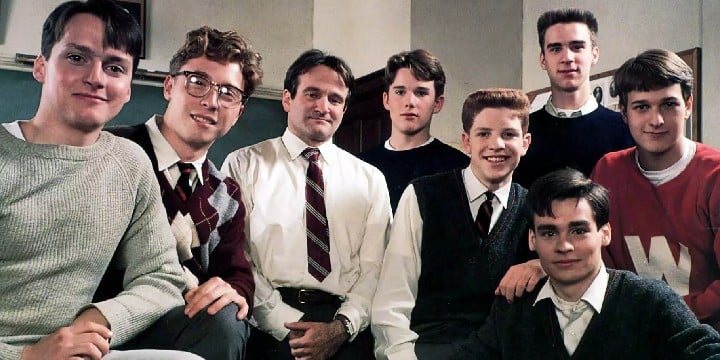 Get a glimpse of how education and learning go beyond the four walls of the classroom through this collection of Dead Poets Society quotes!

Educators play a huge role in molding our life as students and, ultimately, as people.

Our teachers are the ones who push us to strive for something better, and they help us recognize that learning can be found anywhere.

John Keating related this lesson to poetry, writing, literature, and more in the movie.

He didn’t limit his role to the classroom. Instead, he taught his class to suck the marrow out of life and go beyond their limits.

His teaching techniques transcended the pages of books, making him a one-of-a-kind teacher we’d all want to have.

So, if you feel like you’re not living your life to the fullest, don’t panic.

Read through this collection of the best Dead Poets Society quotes, and maybe you’ll find your way toward your passion in life.

And don’t forget to check out these Good Will Hunting quotes and Robin Williams quotes.

1. “Boys, you must strive to find your own voice. Because the longer you wait to begin, the less likely you are to find it at all. Thoreau said, ‘Most men lead lives of quiet desperation.’ Don’t be resigned to that. Break out!” – John Keating

3. “College will probably destroy your love for poetry. Hours of boring analysis, dissection, and criticism will see to that. College will also expose you to all manner of literature—much of it transcendent works of magic that you must devour; some of it utter dreck that you must avoid like the plague.” – John Keating

4. “Savor language and words because no matter what anyone tells you, words and ideas have the power to change the world.” – John Keating

6. “To quote from Whitman, ‘O me! O life! Of the questions of these recurring; of the endless trains for the faithless—of cities filled with the foolish; what good amid these, ‘Oh me, O life?’ Answer. That you are here—that life exists and identity; that the powerful play goes on, and you may contribute a verse. What will your verse be?” – John Keating

8. “This is a battle, a war, and the casualties could be your hearts and souls.” – John Keating

9. “Show me the heart unfettered by foolish dreams, and I’ll show you a happy man.” – Mr. George McAllister

10. “But only in their dreams can men be truly free. ‘Twas always thus, and always thus will be.” – John Keating

11. “I brought them up here to illustrate the point of conformity: the difficulty in maintaining your own beliefs in the face of others. Now, those of you—I see the look in your eyes like, ‘I would’ve walked differently.’ Well, ask yourselves why you were clapping. Now, we all have a great need for acceptance. But you must trust that your beliefs are unique, your own, even though others may think them odd or unpopular, even though the herd may go, ‘That’s baaaaad.’ Robert Frost said, ‘Two roads diverged in a wood and I, I took the one less traveled by, and that has made all the difference.'” – John Keating

12. “I hereby reconvene the Dead Poets Society. Welton chapter. The meetings will be conducted by myself and the other new initiates now present. Todd Anderson, because he prefers not to read, will keep minutes of the meetings. I’ll now read the traditional opening message by society member Henry David Thoreau. ‘I went to the woods because I wanted to live deliberately. I wanted to live deep and suck out all the marrow of life.'” – Neil Perry

13. “We were romantics. We didn’t just read poetry; we let it drip from our tongues like honey. Spirits soared, women swooned, and gods were created, gentlemen. Not a bad way to spend an evening, eh?” – John Keating

14. “They’re not that different from you, are they? Same haircuts. Full of hormones, just like you. Invincible, just like you feel. The world is their oyster. They believe they’re destined for great things, just like many of you. Their eyes are full of hope, just like you. Did they wait until it was too late to make from their lives even one iota of what they were capable of? Because you see, gentleman, these boys are now fertilizing daffodils. But if you listen real close, you can hear them whisper their legacy to you. Go on, lean in. Listen, you hear it? Carpe. Hear it? Carpe. Carpe diem. Seize the day, boys. Make your lives extraordinary.” – John Keating

15. “How do we, like Walt, permit our own true natures to speak? How do we strip ourselves of prejudices, habits, influences? The answer, my dear lads, is that we must constantly endeavor to find a new point of view.” – John Keating

16. “O captain, my captain. Who knows where that comes from? Anybody? Not a clue? It’s from a poem by Walt Whitman about Mr. Abraham Lincoln. Now, in this class, you can either call me Mr. Keating or, if you’re slightly more daring, O captain, my captain.” – John Keating

18. “For the first time in my whole life, I know what I wanna do! And for the first time, I’m gonna do it! Whether my father wants me to or not! Carpe diem!” – Neil Perry

19. “I sound my barbaric yawp over the rooftops of the world!” – Neil Perry

26. “Listen, don’t mind Cameron. He was born with his foot in his mouth. You know what I mean?” – Neil Perry

27. “You’re in the club! Being in the club means being stirred up by things. You look about as stirred up as a cesspool!” – Neil Perry

29. “To put to rout all that was not life; and not, when I had come to die, discover that I had not lived.” – John Keating

30. “Because, believe it or not, each and every one of us in this room is one day going to stop breathing, turn cold and die.” – John Keating

31. “I stand upon my desk to remind myself that we must constantly look at things in a different way.” – John Keating

Dead Poets Society Quotes for Those Who Need Encouragement

32. “No, you can do better than that. Free up your mind. Use your imagination. Say the first thing that pops into your head, even if it’s total gibberish. Go on, go on.” – John Keating

33. “This is a battle, boys. War! You are souls at a critical juncture. Either you will succumb to the will of academic hoi polloi, and the fruit will die on the vine—or you will triumph as individuals.” – John Keating

35. “Just when you think you know something, you have to look at it in another way. Even though it may seem silly or wrong, you must try.” – John Keating

36. “Then you’re acting for him, too. You’re playing the part of a dutiful son. I know this sounds impossible, but you have to talk to him. You have to show him who you are, where your heart is!” – John Keating

Profound Dead Poets Society for Those Who Bleed Poetry

37. “The Dead Poets were dedicated to sucking the marrow out of life. That’s a phrase from Thoreau that we’d invoke at the beginning of each meeting. You see, we’d gather at the old Indian cave and take turns reading from Thoreau, Whitman, Shelley—the biggies. Even some of our own verses. And in the enchantment of the moment, we’d let poetry work its magic.” – John Keating

42. “I thought the purpose of education was to learn to think for yourself.” – John Keating

43. “So avoid using the word ‘very’ because it’s lazy. A man is not very tired; he is exhausted. And don’t use very sad; use morose. Language was invented for one reason, boys—to woo women. And in that endeavor, laziness will not do. It also won’t do in your essays.” – John Keating

44. “Have no fear, you will learn what this school wants you to learn in my class; however, if I do my job properly, you will also learn a great deal more.” – John Keating

45. “You are not an indentured servant! It’s not a whim for you. You prove it to him by your conviction and your passion! You show that to him, and if he still doesn’t believe you—well, by then, you’ll be out of school and can do anything you want.” – John Keating

46. “Neil, you have the gift. What a performance. You left even me speechless.” – John Keating

50. “Phone call from God. If it had been collected, that would have been daring!” – John Keating

52. “Don’t just walk off the ledge like lemmings. Look around you.” – John Keating

53. Mr. McAllister: “You take a big risk by encouraging them to be artists, John. When they realize they’re not Rembrandts, Shakespeare, or Mozarts, they’ll hate you for it.”

55. “Sucking the marrow out of life doesn’t mean choking on the bone.” – John Keating

57. “I was the intellectual equivalent of a 98-pound weakling! I would go to the beach, and people would kick copies of Byron in my face! – John Keating

58. “Slow down, boys! Slow down, you horrible phalanx of pubescence.” – John Keating

59. “Congratulations, Mr. Hopkins. You have the first poem to ever have a negative score on the Pritchard scale.” – John Keating

Do You Want to Have a Teacher Like Mr. Keating?

Passion is a big concept most of us have a hard time grasping. It’s an idea so overwhelming that sometimes, we just rely on other people to make the path for us—it’s easier this way, right?

However, some of us are lucky enough to meet people that would completely change the trajectory of our lives. These people open our eyes to new perspectives and worldviews, giving us a chance to seek and grab onto new opportunities. As we’ve observed from the movie, John Keating is that type of person, and his students were quite blessed to come across him as their teacher.

Through him, we learn that there’s so much more of the world to explore. Our passions and dreams are our guiding lights—they push us toward a more fulfilling life. So, the next time you’re torn between following your dreams or someone else’s opinions, make sure you stick to what would make you happy.

Dead Poets Society is a movie that makes us stop and reflect on our lives. When you feel stuck or lost, make sure you revisit these quotes we’ve gathered for you!

Which quotes made an impact on you? Did you relate to any of the quotes? We’d love to hear from you, so comment below!