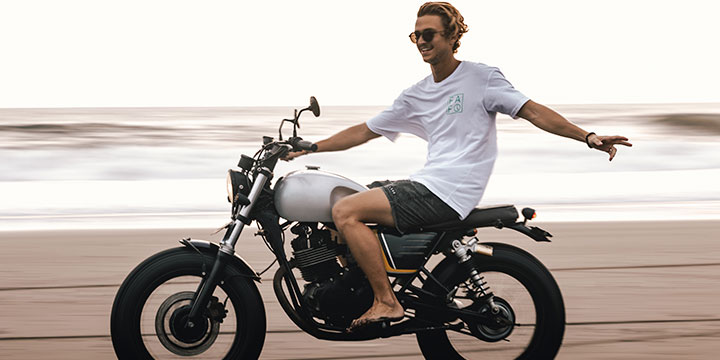 Looking for the best destiny quotes? We’ve compiled a list of top 100 quotes and sayings.

1. “Every man has his own destiny: the only imperative is to follow it, to accept it, no matter where it leads him.” – Henry Miller

2. “It’s choice – not chance – that determines your destiny.” – Jean Nidetch

3. “Control your own destiny or someone else will.” – Jack Welch

4. “Destiny has a lot to do with it, but so do you. You have to persevere, you have to insist.” – Andrea Bocelli

6. “Once an object has been incorporated in a picture it accepts a new destiny.” – Georges Braque

7. “The only person you are destined to become is the person you decide to be.” – Ralph Waldo Emerson

8. “I escaped my destiny. The odds were that I would end up in prison, but I didn’t.” – Roger Ross Williams

9. “Your thoughts are the architects of your destiny.” – David O. McKay

11. “The best years of your life are the ones in which you decide your problems are your own. You do not blame them on your mother, the ecology, or the president. You realize that you control your own destiny.” – Albert Ellis 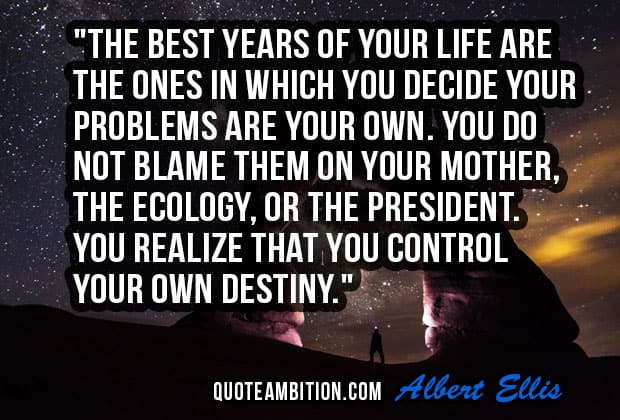 13. “The bottom line is to be in control of your own destiny.” – James Woods

14. “Even when you think you have your life all mapped out, things happen that shape your destiny in ways you might never have imagined.” – Deepak Chopra

15. “It is not in the stars to hold our destiny but in ourselves.” – William Shakespeare

17. “Do not compare yourself to others. You have a unique destiny and mission that only you can accomplish.” – Mariane Pearl

18. “And when man faces destiny, destiny ends and man comes into his own.” – Andre Malraux

20. “I’ve taken my destiny into my own hands and I’m in a happy place.” – Charlie Simpson

21. “It is in your moments of decision that your destiny is shaped.” – Tony Robbins 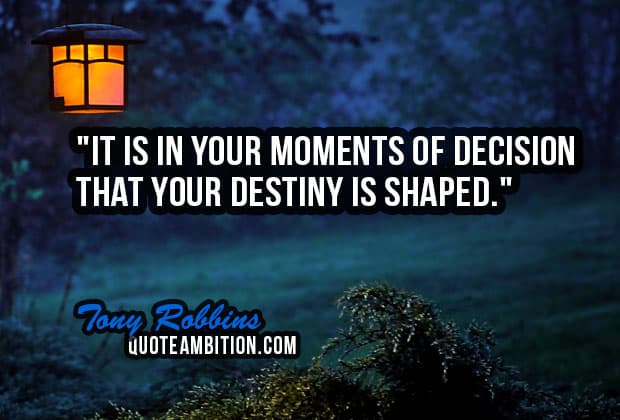 23. “We all have a destiny in accordance with the breadth of our shoulders. My shoulders are broad.” – Placido Domingo

24. “Wherever we are in life is where destiny has brought us. It doesn’t mean we have to stay there.” – James Redfield

26. “A person often meets his destiny on the road he took to avoid it.” – Jean de La Fontaine

27. “Destiny is usually just around the corner. Like a thief, a hooker, or a lottery vendor: its three most common personifications. But what destiny does not do is home visits. You have to go for it.” – Carlos Ruiz Zafón

28. “I’m a believer in fate and in fulfilling your destiny. I’ve always had a kind of inner voice that I have learned to listen to.” – Tom Ford

29. “Fame comes only when deserved, and then is as inevitable as destiny, for it is destiny.” – Henry Wadsworth Longfellow

30. “All I know is that if we play well, we control our own destiny in terms of what we do.” – Nick Saban

31. “No trumpets sound when the important decisions of our life are made. Destiny is made known silently.” – Agnes de Mille 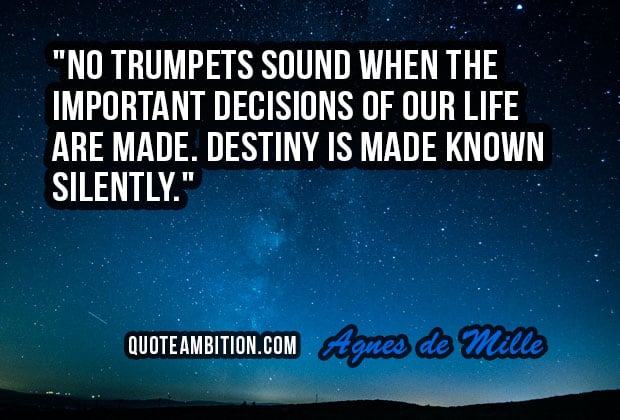 32. “Every people should be originators of their own destiny.” – Martin Delany

33. “Sooner or later, if man is ever to be worthy of his destiny, we must fill our hearts with tolerance.” – Stan Lee

34. “Take destiny in your own hands.” – Chanda Kochhar

35. “I’ll take my destiny, whatever that may be, but I’m going to fight for my dignity and my honor.” – Ferdinand Marcos

36. “We are each other’s destiny.” – Jacqueline Novogratz

37. “In a larger sense, we all write our own destiny.” – Chanda Kochhar

38. “Destiny is a good thing to accept when it’s going your way. When it isn’t, don’t call it destiny; call it injustice, treachery, or simple bad luck.” – Joseph Heller

39. “You will never fulfill your destiny doing work you despise.” – John C. Maxwell

40. “Destiny is something not be to desired and not to be avoided. a mystery not contrary to reason, for it implies that the world, and the course of human history, have meaning.” – Dag Hammarskjold

41. “In real open source, you have the right to control your own destiny.” – Linus Torvalds 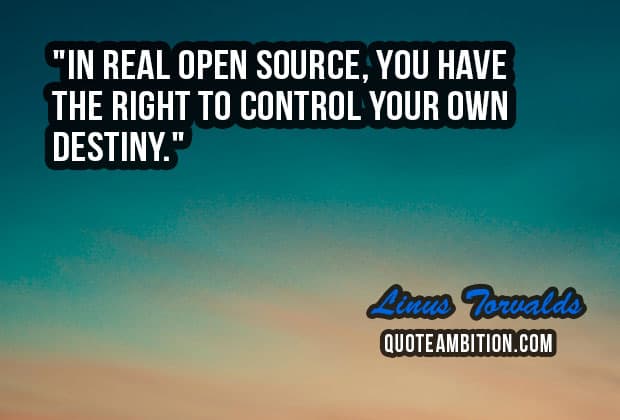 42. “It’s my destiny to make a place where people can come and be happy: a garden of joy.” – Niki de St. Phalle

43. “I believe a lot in destiny and I think that if something didn’t happen, it was for a reason.” – Didier Drogba

44. “I can control my destiny, but not my fate. Destiny means there are opportunities to turn right or left, but fate is a one-way street. I believe we all have the choice as to whether we fulfil our destiny, but our fate is sealed.” – Paulo Coelho

45. “We are all tied to our destiny and there is no way we can liberate ourselves.” – Rita Hayworth

47. “Destiny is a name often given in retrospect to choices that had dramatic consequences.” – J.K. Rowling

48. “There are winds of destiny that blow when we least expect them. Sometimes they gust with the fury of a hurricane, sometimes they barely fan one’s cheek. But the winds cannot be denied, bringing as they often do a future that is impossible to ignore.” – Nicholas Sparks

49. “Destiny smiles upon me but without making me the least bit happier.” – Gustav Mahler

51. “I don’t know what your destiny will be, but one thing I know: the only ones among you who will be really happy are those who will have sought and found how to serve.” – Albert Schweitzer 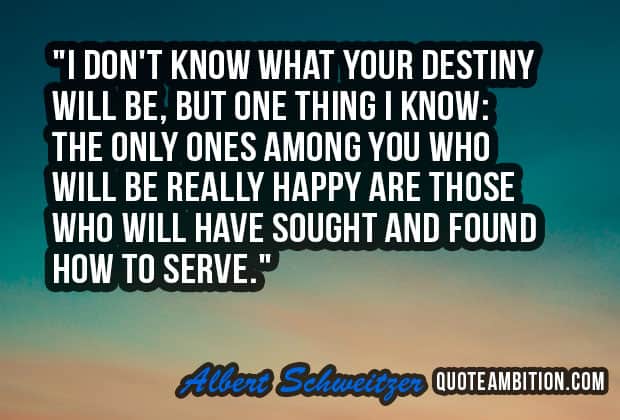 52. “Men do not shape destiny, Destiny produces the man for the hour.” – Fidel Castro

53. “It is a mistake to look too far ahead. Only one link of the chain of destiny can be handled at a time.” – Winston Churchill

54. “Ignorance is bliss, or so we’re told. Personally, I find ignorance is also destiny.” – Gayle Lynds

57. “Your life will be no better than the plans you make and the action you take. You are the architect and builder of your own life, fortune, destiny.” – Alfred A. Montapert

58. “Some things is made by destiny, yes, other things by hard work, but quality you don’t learn. Quality you are born with.” – Zlatan Ibrahimovic

59. “Anything that happens in your life was meant to happen. It is your destiny. I was destined to have the life I have now, and I can’t have any regrets.” – Zlatan Ibrahimovic

60. “As long as we are persistence in our pursuit of our deepest destiny, we will continue to grow. We cannot choose the day or time when we will fully bloom. It happens in its own time.” – Denis Waitley

61. “Destiny grants us our wishes, but in its own way, in order to give us something beyond our wishes.” – Johann Wolfgang von Goethe 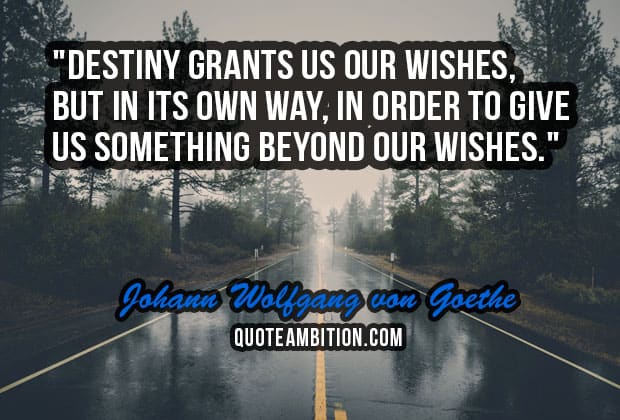 62. “One knows less about one’s own destiny than about anything else on earth.” – Gabrielle Roy

63. “Actions are the seed of fate deeds grow into destiny.” – Harry S Truman

64. “Love is our true destiny. We do not find the meaning of life by ourselves alone – we find it with another.” – Thomas Merton

65. “Your destiny is to fulfill those things upon which you focus most intently. So choose to keep your focus on that which is truly magnificent, beautiful, uplifting and joyful. Your life is always moving toward something.” – Ralph Marston

66. “God wants us to prosper financially, to have plenty of money, to fulfill the destiny He has laid out for us.” – Joel Osteen

67. “Every man gotta right to decide his own destiny.” – Bob Marley

68. “You control your future, your destiny. What you think about comes about. By recording your dreams and goals on paper, you set in motion the process of becoming the person you most want to be. Put your future in good hands – your own.” – Mark Victor Hansen

69. “No man can be stronger than his destiny.” – Mary Hunter Austin

70. “Bottom line: God will not allow any person to keep you from your destiny. They may be bigger, stronger, or more powerful, but God knows how to shift things around and get you to where you’re supposed to be.” – Joel Osteen

71. “Destiny has two ways of crushing us – by refusing our wishes and by fulfilling them.” – Henri Frederic Amiel 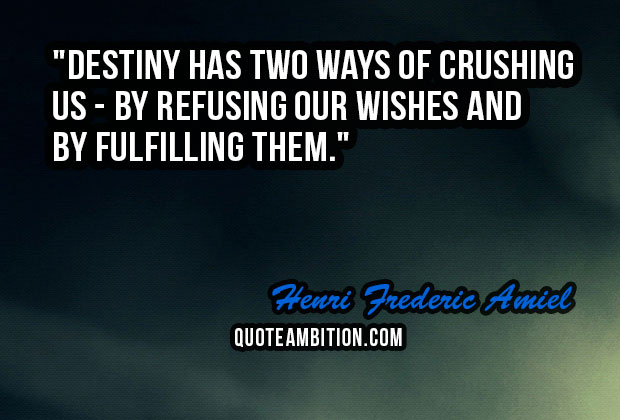 72. “I think ‘destiny’ is just a fancy word for a psychological pattern.” – Jodie Foster

73. “Many of the most important and life-changing moments of my life occurred when I was a young man. The lessons I learned then formed my character and shaped my destiny.” – Joseph B. Wirthlin

74. “The high destiny of the individual is to serve rather than to rule.” – Albert Einstein

75. “I thought, if I went into business I’d be able to control my own destiny.” – Tommy Hilfiger

77. “Destiny is real. And she’s not mild-mannered. She will come around and hit you in the face and knock you over and before you know what hit you, you’re naked- stripped of everything you thought you knew and everything you thought you didn’t know- and there you are! A bloody nose, bruises all over you, and naked. And it’s the most beautiful thing.” – C. JoyBell C.

78. “Adapt yourself to the things among which your lot has been cast and love sincerely the fellow creatures with whom destiny has ordained that you shall live.” – Marcus Aurelius

81. “My goal was, and still is, to write first, direct my own stuff whenever possible and control my own creative destiny.” – Jeff Probst 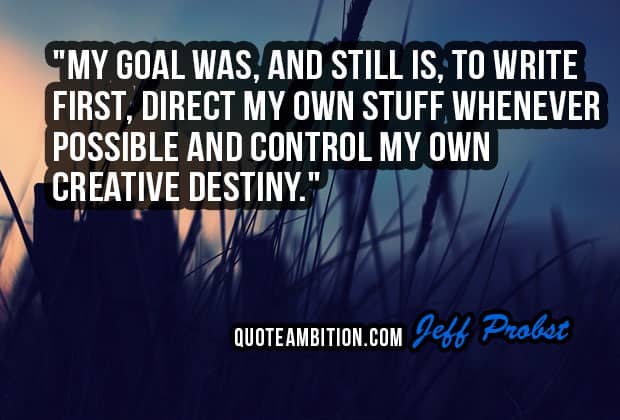 82. “We are not permitted to choose the frame of our destiny. But what we put into it is ours.” – Dag Hammarskjold

83. “The chief condition on which, life, health and vigor depend on, is action. It is by action that an organism develops its faculties, increases its energy, and attains the fulfillment of its destiny.” – Colin Powell

85. “No man is great enough or wise enough for any of us to surrender our destiny to. The only way in which anyone can lead us is to restore to us the belief in our own guidance.” – Henry Miller

87. “When people walk away from you, let them go. Your destiny is never tied to anyone who leaves you, and it doesn’t mean they are bad people. It just means that their part in your story is over.” – T. D. Jakes

88. “Sorrowful and great is the artist’s destiny.” – Franz Liszt

89. “I want to go behind the scenes as well as on screen. I think you have to make your own destiny in this world.” – Avan Jogia

90. “We have to live with our loneliness and the destiny that drives each person to the order of things.” – Cecile de France

91. “Everyone should have the freedom and opportunity to shape their own destiny.” – Mohamed Bin Issa Al Jaber 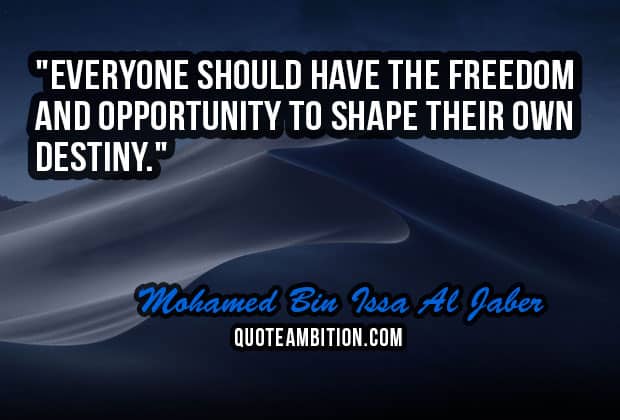 92. “You can be great only if it is your destiny.” – Andrea Bocelli

93. “I run my own world, because I very firmly believe that my destiny, my future is in my hands and I don’t want to blame anybody else for the path that I take.” – Vijay Mallya

94. “Man is asked to make of himself what he is supposed to become to fulfill his destiny.” – Paul Tillich

95. “If you do not create your destiny, you will have your fate inflicted upon you.” – William Irwin Thompson

96. “Working harder is not a sustainable solution and it’s not how people meet their destiny. It’s time to get more creative. Instead of choosing one thing we love over something else we love, we must ask, ‘how can I do both?’ And, then, we can find solutions.” – Maynard Webb

97. “I just took it one step at a time and let fate determine my destiny.” – Henry Samueli

98. “For us, destiny always feels… if you obey, it’s almost a passive thing.” – Danny Boyle

100. “I do believe that one way to have a destiny is to choose one.” – Melinda McGraw