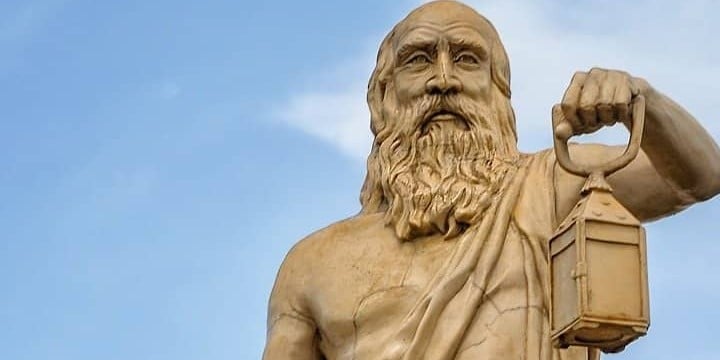 Learn a thing or two about self-sufficiency and moral excellence through these Diogenes quotes.

Diogenes lived between c. 412-323 B.C., but his ideals and philosophies are things that we can still look to when we need inspiration and guidance.

He was a master of Cynic philosophy and credited by some as the one who started the Cynic way of life.

So, give yourself a favor and check out his most famous lines below.

And don’t forget to check out these Epictetus quotes and Seneca quotes.

1. “The sun too penetrates into privies, but is not polluted by them.”

3. “I do not know whether there are gods, but there ought to be.”

4. “There is only a finger’s difference between a wise man and a fool.”

5. “Most men are within a finger’s breadth of being mad.”

6. “He has the most who is most content with the least.”

7. “The great thieves lead away the little thief.”

8. “It is the privilege of the gods to want nothing, and of godlike men to want little.”

10. “Of what use is a philosopher who doesn’t hurt anybody’s feelings?”

11. “Why not whip the teacher when the pupil misbehaves?”

12. “The foundation of every state is the education of its youth.”

13. “As a matter of self-preservation, a man needs good friends or ardent enemies, for the former instructs him and the latter takes him to task.”

14. “I have nothing to ask but that you would remove to the other side—that you may not, by intercepting the sunshine, take from me what you cannot give.”

15. “The vine bears three kinds of grapes—the first of pleasure, the second of intoxication, the third of disgust.”

16. “What I like to drink most is wine that belongs to others.”

17. “Dogs and philosophers do the greatest good and get the fewest rewards.”

18. “Wise kings generally have wise counselors; and he must be a wise man himself who is capable of distinguishing one.”

Diogenes Quotes on Man and Nature

21. “Man is the most intelligent of the animals—and the most silly.”

23. “People who talk well but do nothing are like musical instruments; the sound is all they have to offer.”

26. “The noblest people are those despising wealth, learning, pleasure, and life; esteeming above them poverty, ignorance, hardship, and death.”

27. “To arrive at perfection, a man should have very sincere friends or inveterate enemies; because he would be made sensible of his good or ill conduct, either by the censures of the one or the admonitions of the other.”

30. “All things are in common among friends.”

31. “We have complicated every simple gift of the gods.”

32. “We come into the world alone and we die alone. Why, in life, should we be any less alone?”

33. “When two friends part, they should lock up each other’s secrets and exchange keys. The truly noble mind has no resentments.”

34. “As houses well-stored with provisions are likely to be full of mice, so the bodies of those that eat much are full of diseases.”

35. “That’s nothing wonderful, for a beetle or a tarantula would do the same.”

36. “Young men ought not to marry yet, and old men never ought to marry at all.”

37. “Other dogs bite only their enemies, whereas I also bite my friends in order to save them.”

38. “I am searching for the bones of your father, but cannot distinguish them from those of a slave.”

41. “We have two ears and one tongue so that we would listen more and talk less.”

42. “I threw my cup away when I saw a child drinking from his hands at the trough.”

43. “Solon used to say that speech was the image of actions, that laws were like cobwebs—for that if any trifling or powerless thing fell into them, they held it fast; while if it were something weightier, it broke through them and was off.”

44. “There is a false love that will make you something you are not.”

45. “To become self-educated, you should condemn yourself for all those things that you would criticize others.”

46. “Nothing can be produced out of nothing.”

47. “Even if I am but a pretender to wisdom, that in itself is philosophy.”

48. “The most beautiful thing in the world is freedom of speech.”

49. “Let us not unlearn what we have already learned.”

50. “We are more curious about the meaning of dreams than about things we see when awake.”

51. “One original thought is worth a thousand mindless quotings.”

52. “If I lack awareness, then why should I care what happens to me when I am dead?”

54. “Fools! You think of god as a sentient being. God is the word used to represent a force. This force created nothing, it just helps things along. It does not answer prayers, although it may make you think of a way to solve a problem. It has the power to influence you, but not decide for you.”

55. “Self-taught poverty is a help toward philosophy, for the things which philosophy attempts to teach by reasoning, poverty forces us to practice.”

56. “You will become a teacher of yourself when for the same things that you blame others, you also blame yourself.”

57. “When I look upon seamen, men of science, and philosophers, man is the wisest of all beings; when I look upon priests and prophets, nothing is as contemptible as man.”

58. “You are a simpleton, Hegesias. You do not choose painted figs, but real ones; and yet you pass over the true training and would apply yourself to written rules.”

59. “If I gained one thing from philosophy, it is that at the very least, I am well prepared to confront any change in fortune.”

Diogenes Quotes on Virtue and Values

60. “Those who have virtue always in their mouths and neglect it in practice, are like a harp, which emits a sound pleasing to others, while itself is insensible of the music.”

61. “It was a favorite expression of Theophrastus that time was the most valuable thing that a man could spend.”

62. “One ought to seek out virtue for its own sake, without being influenced by fear or hope, or by any external influence. Moreover, that is what happiness consists of.”

63. “Boasting, like gilded armour, is very different inside from outside.”

65. “The health and vigor necessary for the practice of what is good, depend equally on both mind and body.”

66. “Discourse on virtue and they pass by in droves. Whistle and dance the shimmy, and you’ve got an audience.”

67. “The chief good is the suspension of the judgment—especially negative judgement—which tranquillity of mind follows like its shadow.”

68. “Antisthenes used to say that envious people were devoured by their own disposition, just as iron is by rust.”

72. “Lust is a strong tower of mischief, and has in it many defenders, as neediness, anger, paleness, discord, love, and longing.”

73. “The only way to gall and fret effectively is for yourself to be a good and honest man.”

74. “Poverty is a virtue which one can teach oneself.”

75. “Virtue cannot dwell with wealth either in a city or in a house.”

80. “Education gives sobriety to the young, comfort to the old, riches to the poor, and is an ornament to the rich.”

Are You Able to Find the Ultimate Good In Life With the Help of These Diogenes Quotes?

Diogenes was normally found roaming the streets of Athens, holding a lamp up to people’s faces, and claiming to be looking for an ‘honest man’. He used this method to awaken people and expose the hypocrisy of normalized societal customs. In his lost writings, it is said that he described a revolutionary utopia where people lived ‘natural’ lives—a life of self-sufficiency, moral excellence, rejection of luxury, and complete truthfulness. For him, this should be the ultimate purpose and objective of man and society.