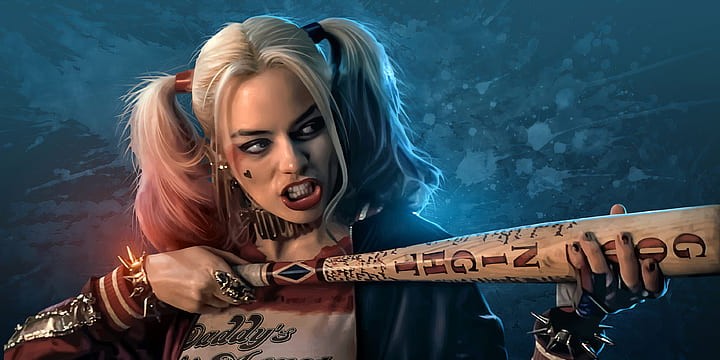 There are some crazy beautiful lessons from these dark and twisted Harley Quinn quotes.

Portrayed as a fearsome and complex female character, there’s an interesting point of view each of us can learn by reading through this Harley Quinn quote collection.

And make sure to check out these Captain America quotes and Wonder Woman quotes.

1. “Sometimes, the only way to stay sane is to go a little crazy.”

2. “You can’t deny that there’s an element of glamour to these super criminals.”

3. “We can’t change the past, but there’s a difference between moving on and letting go.”

4. “I found The Joker’s psyche disturbing, his dementia alarming, and his charm irresistible! What can I tell you? The guy just did it for me.”

6. “Face it, Harl, this stinks—you’re a certified nutso wanted by the law in over a dozen states, and hopelessly in love with a murderous, psychopathic clown.”

8. “You think I’m just a doll—a doll that’s pink and light, a doll you can arrange any way you like. You’re wrong. Very wrong. What you think of me is only a ghost of time. I am dangerous, and I will show you just how dark I can be.”

9. “That’s so cute, you think you’re scary. Well, mister, I’ve seen scary and you don’t have his smile.”

12. “It soon became clear to me that the Joker, so often described as a raving, homicidal madman, was actually a tortured soul crying out for love and acceptance—a lost, injured child trying to make the world laugh at his antics.”

13. “If I’m mad enough to skip the tears and go straight to laughing, you better run cause I’m about to lose my shit.”

14. “I tried to play by the rules, but no! They wouldn’t let me go straight! Society is to blame!”

15. “Every woman has a crazy side that only the right man can bring out.”

16. “You know, for what it’s worth, I actually enjoyed some of our romps, but there comes a time when a gal wants more. And now, all this gal wants is to settle down with her lovin’ sweetheart.”

17. “Why can’t a girl be nice to a guy without the mook trying to murder her?”

18. “And here you thought I was just another bubble headed, blonde, bimbo.”

22. “Nice to meet you. Love your perfume. What is that? The stench of death?”

27. “Everyone can see all this trippy magic stuff, right? I’m off my meds.”

30. “What was that? I should kill everyone and escape? Sorry, it’s the voices. I’m kidding! That’s not what they really said.”

31. “Ladies and jerks! There’s been a slight change in tonight’s show. Instead of the opera robbin’ you for something’ like a thousand bucks a seat, we’re gonna rob you! Believe me, folks, I’ve seen it already. I’m doing you a big favor!”

35. “Number one, no one is like me. If you wanted to even come close, you would have to go to medical school. Become a psychiatrist. Work in an asylum. Fall in love with your patient. Break said patient out of said asylum. Begin a life of crime. Jump into a vat of chemicals to prove yourself to a madman. Get arrested by the Batman. Go back to jail. Get out of jail with a bomb on your neck. Save the world, go back to jail, and break out of jail before breaking up with the aforementioned madman, and going out on your own.”

376 “And what’s worse, every person I ever wronged now felt free to come and take their pound of flesh.”

38. “If you want boys to respect you, show them you’re serious. Shoot something, blow it up!”

41. “They’ve got Hello Kitty on them. They’re fashionable.”

42. “I think you should do what he says. It would be a shame to get blood all over my nice new outfit. What do you think, Bat-brain? Like it? What am I saying? ‘Course you do. Who wouldn’t?”

47. “Yeesh, you make one little mistake and they never let you forget!”

48. “I’m having a bad day! I’m sick of people tryin ta shoot me, run me over, or blow me up! All I wanted was a new dress and I actually paid for it!”

49. “You’ve got the look and a lotta nerve. What you don’t have is the right. Joker was a hero. You’re not fit to lick his boutonniere!”

50. “Whatever doesn’t kill you simply makes you stranger.”

51. “The world can be amazing when you’re slightly strange.”

54. “You don’t know who that is? The Joker. The Clown Prince of Crime. My former partner in madness. The Harlequin of Hate. The Jester of Genocide. You’ve never heard of him?”

60. “As unprofessional as it sounds, I had fallen in love with my patient. Pretty crazy, huh?”

61. “I’ve made so many mistakes and there’s no one left who believes in me.”

62. “Never again. No more obsession, no more craziness, no more Joker. I finally see that slime for what he is—a murderous, manipulative, irredeemable.”

63. “Whatever you say bounces off me and makes a six-inch-diameter exit wound in you.”

68. “You’re just jealous ’cause you don’t have a fella who’s as loving and loyal to you as my Puddin’ is to me!”

71. “I have done everything you said—every test, every trial, every initiation. I have proved I love you. Just accept it!”

72. “My love for my Joker was stronger than their madhouse walls.”

75. “I know how the world works, okay? And when it comes to the heart, everyone for themselves, right?”

What Kind of Worldview Did This Collection Give You?

Though Harley Quinn and the rest of her companions are portrayed as despicable villains in the DC franchise, there’s no denying that she’s someone who gets stronger with each adversity she faces. She’s taught a lot of people to embrace the weirdness—the bizarre—in them, as well as their mistakes. Continue to rise up and stand again, and get stronger each and every time.

Did these quotes give light on how you can learn from the challenges you face? Who is your favorite DC character? We’re excited to have a conversation on this, so be sure to comment down below!