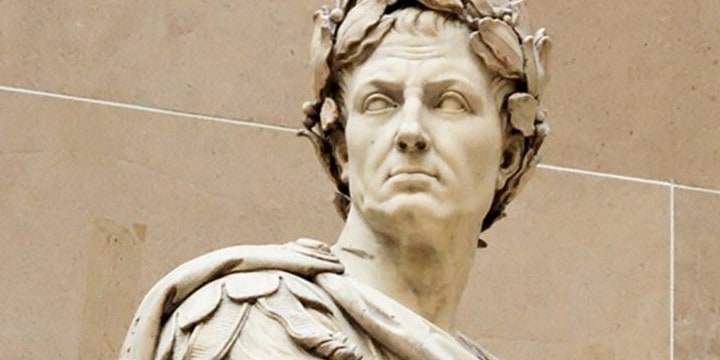 Take a look into the life of the man who sparked revolutionary changes in ancient Rome through these Julius Caesar quotes.

Like any leader who dedicated his life to serving his people, Julius Caesar was loved, and we’re sure you’ll love this collection too!

Though known to be one of the greatest military commanders of all time, he was more than just a great strategist and politician; he was also a very creative and talented writer who delved into the arts and poetry.

Learn more about Julius Caesar below.

And don’t forget to check out these Niccolo Machiavelli quotes and Marcus Aurelius quotes.

1. “In the end, it is impossible not to become what others believe you are.”

2. “Experience is the teacher of all things.”

4. “And when the drums of war have reached a fever pitch and the blood boils with hate and the mind is closed, the leader will have no need in seizing the rights of the citizenry. Rather, the citizenry infused with fear and blinded by patriotism, will offer up all of their rights unto the leader and do it gladly.”

5. “The greatest enemy will hide in the last place you would ever look.”

6. “If you must break the law, do it to seize power. In all other cases, observe it.”

7. “Many of you wished me dead. Many of you perhaps still do. But I hold no grudges and seek no revenge.”

9. “A coward dies a thousand deaths, the gallant never tastes death but once.”

10. “As a rule, what is out of sight disturbs men’s minds more seriously than what they see.”

11. “Men, in general, are quick to believe that which they wish to be true.”

13. “It is easier to find men who will volunteer to die, than to find those who are willing to endure pain with patience.”

14. “War gives the right to the conquerors to impose any condition they please upon the vanquished.”

15. “No one is so brave that he is not disturbed by something unexpected.”

16. “The Celts were fearless warriors because they wish to inculcate this as one of their leading tenets—that souls do not become extinct, but pass after death from one body to another.”

17. “Wine and other luxuries have a tendency to enervate the mind and make men less brave in battle.”

19. “Arms and laws do not flourish together.”

20. “To win by strategy is no less the role of a general than to win by arms.”

21. “In war, events of importance are the result of trivial causes.”

22. “It is the right of war for conquerors to treat those whom they have conquered according to their pleasure.”

23. “Our men must win or die. Pompeii’s men have other options.”

24. “As a result of a general defect of nature, we are either more confident or more fearful of unusual and unknown things.”

25. “I am going to Spain to fight an army without a general, and then to the East to fight a general without an army.”

27. “Fortune, which has a great deal of power in other matters but especially in war, can bring about great changes in a situation through very slight forces.”

28. “I have lived long enough both in years and in accomplishments.”

29. “I believe that the members of my family must be as free from suspicion as from actual crime.”

30. “If I fail, it is only because I have too much pride and ambition.”

31. “The difference between a republic and an empire is the loyalty of one’s army.”

32. “He conquers twice, who shows mercy to the conquered.”

33. “What we wish, we readily believe, and what we ourselves think, we imagine others think also.”

36. “Which death is preferable to every other? The unexpected.”

37. “Set honor in one eye and death in the other, and I will look on both indifferently.”

38. “Avoid an unusual and unfamiliar word just as you would a reef.”

39. “Fate, dear Brutus, lies not with the stars but within ourselves.”

40. “It is better to create than to learn! Creating is the essence of life.”

41. “It is better to suffer once than to be in perpetual apprehension.”

44. “I would rather be first in a village than second in Rome.”

45. “It is not these well-fed, long-haired men that I fear, but the pale and the hungry-looking.”

46. “It is the custom of the immortal gods to grant temporary prosperity and a fairly long period of impunity to those whom they plan to punish for their crimes, so that they may feel it all the more keenly as a result of the change in their fortunes.”

47. “Cowards die many times before their actual deaths.”

48. “No music is so charming to my ear as the requests of my friends, and the supplications of those in want of my assistance.”

50. “We have not to fear anything, except fear itself.”

Did These Julius Caesar Quotes Move You to Conquer Your Dreams and the Challenges in Your Life?

Aside from being a great general who expanded Roman territory, Julius Caesar advocated for his people. During the time that he led Rome, he acted on many reforms to reduce debt and unemployment, and improved the state of the Roman people’s living standards. However, his political career ended abruptly when he was betrayed by many of his trusted comrades. This, in turn, paved the way for the downfall of the Roman Republic and led to the beginning of the Roman Empire. And though he did not become an emperor, advancing the power and glory of Rome was always his first priority—he took risks and was bold in his actions. He believed that nothing was set in stone, and thus, he worked day and night to fulfil all of his goals when he was still alive. He was one of Rome’s best leaders, and we might just pick up a thing or two from the life and leadership lessons in his quotes.

What did you learn from this collection of Julius Caesar quotes? Do you think he was a good and successful leader? Let us know what you think in the comments sections below!