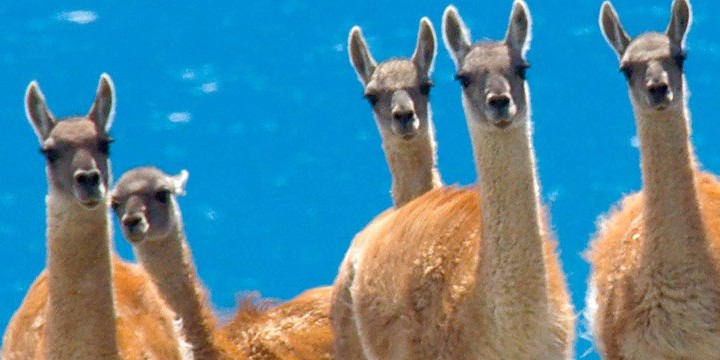 Here are some of the best llama quotes that are perfect for those who love llamas.

So, if you want some more facts on them, or even just some cute and interesting quotes to pass time, then this collection is definitely for you!

Llamas are very social animals and live with others as a herd, and there’s definitely more to them than just having long eyelashes and a smug expression.

They are actually surprisingly smart, friendly, and quirky. They can even learn simple tasks after a few repetitions.

Take a look at the collection below.

And make sure to check out these animal quotes and deer quotes too.

1. “Men—you can’t live with them, and you can’t legally shoot them. I tossed out my husband eight years ago and got a llama instead. Best decision I ever made.” – Jodi Picoult

2. “Llamas can drive—they just don’t know it yet.” – Llama Queen

3. “There is nothing like a llama—well, maybe an alpaca. But they’re kinda like trademarks of llamas.” – Llama Queen

4. “Save your drama for a llama because Hollywood is miles and miles away!” – Timothy Pina

5. “Magnus was sure that the llama stampede he witnessed was a coincidence. The llamas could not be judging him.” – Cassandra Clare

6. “He is like a female llama surprised in her bath.” – Winston Churchill

7. “I don’t care if you’re a Tangent or a really smart llama. You’re my friend and that’s all that matters.” – James Dashner

8. “The llama is a woolly sort of fleecy hairy goat with an indolent expression and an undulating throat.” – Hilaire Belloc

10. “And I will bring a llama into the place where you sleep and make sure that it urinates on everything you possess.” – Cassandra Clare

13. “So yeah, we put llamas everywhere. That was us. We just liked looking at them, so we bred about six million and spread them around.” – Dave Eggers

More Llama Quotes That Will Pique Your Interest

16. “Llamas are animals that are loved by everyone. So, we should hug them on that day, provide them nutritious food, and wish everyone around Happy National Llama Day!” – Anonymous

17. “One has but to spend a few days with an aardvark or llama, command a water buffalo to sit up and beg or try to housebreak a moose, to perceive how wisely man set about his process of elimination and selection.” – James Thurber

18. “May the llama of happiness forever spit in your direction.” – Anonymous

19.” Llamas are mainly found in South America, but now zoos are created to restore the llamas because they are losing their existing, human beings grab their places in nature.” – Anonymous

What Characteristics of a Llama Did You Find Special?

The llama is a domesticated South American camelid—widely used as a meat and pack animal. Llamas make excellent guards for herds of small animals, and they are very social and will adapt in a group of sheep or goats as their own herd.

Llamas are natural protectors and they will protect their herd by chasing off coyotes and other predators. And just like llamas, we also just want to protect the persons that are precious to us and keep them safe away from harm.

Which of these llama quotes is your favorite and why? What new things did you learn about a llama today? Share your thoughts with us in the comments section below!