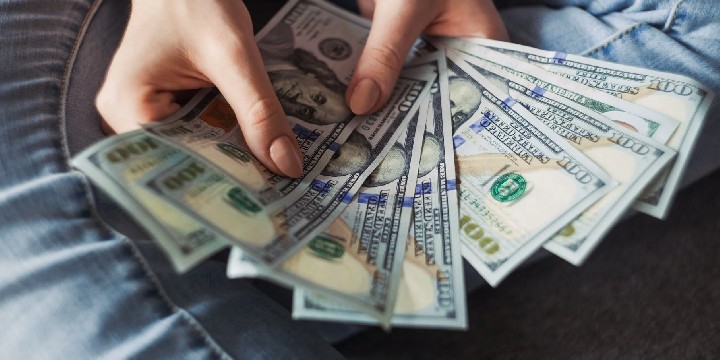 Be motivated to make better financial choices by reading this list of the best money quotes!

Money is one of our primary motivators to move and keep working. Although it cannot buy happiness, it gives us options for a better life by having the freedom to choose things that are better for us. But, sometimes, we spend it on things that are not beneficial for us.

It’s a fact of life that we are drawn more toward what we want than what we need, and most of us have made financial decisions that are not aligned with our goals.

So, if you need some inspirational quotes that’ll help you use your money better, then this collection is perfect for you!

And make sure to read these success quotes and leadership quotes.

1. “Success is not the result of making money. Earning money is the result of success, and success is in direct proportion to our service.” – Earl Nightingale

2. “Too many people spend money they earned to buy things they don’t want to impress people that they don’t like.” – Will Rogers

3. “Do what you love, and the money will follow.” – Marsha Sinetar

4. “Money is only a tool. It will take you wherever you wish, but it will not replace you as the driver.” – Ayn Rand

7. “Financial peace isn’t the acquisition of stuff. It’s learning to live on less than you make, so you can give money back and have money to invest. You can’t win until you do this.” – Dave Ramsey

9. “Many folks think they aren’t good at earning money when what they don’t know is how to use it.” – Frank Clark

10. “Money won’t create success, the freedom to make it will.” – Nelson Mandela

13. “If you can get paid for doing what you love, every paycheck is a bonus.” – Oprah Winfrey

14. “Making money isn’t hard in itself. What’s hard is to earn it doing something worth devoting one’s life to.” – Carlos Ruiz Zafón

15. “You must gain control over your money, or the lack of it will forever control you.” – Dave Ramsey

16. “Money does not buy you happiness, but lack of money certainly buys you misery.” – Daniel Kahneman

17. “Money is good for nothing unless you know the value of it by experience.” – P.T. Barnum

18. “A wise person should have money in their head, but not in their heart.” – Jonathan Swift

19. “If we command our wealth, we shall be rich and free. If our wealth commands us, we are poor indeed.” – Edmund Burke

20. “Wealth consists not in having great possessions, but in having few wants.” – Epictetus

21. “The rich invest in time, the poor invest in money.” – Warren Buffett

22. “If you want to know what God thinks of money, just look at the people he gave it to.” – Dorothy Parker

25. “Making money is common sense. It’s not rocket science. But unfortunately, when it comes to money, common sense is uncommon.” – Robert Kiyosaki

26. “Money is a terrible master but an excellent servant.” – P.T. Barnum

27. “Making money is not a thing that you do. It’s a skill that you learn.” – Naval Ravikant

28. “Empty pockets never held anyone back. Only empty heads and empty hearts can do that.” – Norman Vincent Peale

Wise Money Quotes That Will Teach You About Wealth

31. “Every time you borrow money, you’re robbing your future self.” – Nathan W. Morris

32. “Money is a way of measuring wealth but is not wealth in itself.” – Alan Watts

33. “Money in its proper place is a worthwhile and necessary instrument for a well-rounded life, but when it is projected to the status of a god, it becomes a power that corrupts and an instrument of exploitation.” – Martin Luther King Jr.

34. “The real measure of your wealth is how much you’d be worth if you lost all your money.” – Anonymous

35. “Happiness is not in the mere possession of money. It lies in the joy of achievement, in the thrill of creative effort.” – Franklin D. Roosevelt

36. “Many people take no care of their money ’till they come nearly to the end of it, and others do just the same with their time.” – Johann Wolfgang von Goethe

37. “Try to save something while your salary is small. It’s impossible to save after you begin to earn more.” – Jack Benny

38. “If you want to reap financial blessings, you have to sow financially.” – Joel Osteen

39. “Only buy something that you’d be perfectly happy to hold if the market shuts down for 10 years.” – Warren Buffett

41. “What we really want to do is what we are really meant to do. When we do what we are meant to do, money comes to us, doors open for us, we feel useful, and the work we do feels like play to us.” – Julia Cameron

43. “There are a great many people accumulating what they think is vast wealth, but it’s only money.” – Alan Watts

44. “While money can’t buy happiness, it certainly lets you choose your own form of misery.” – Groucho Marx

45. “Remember that the only purpose of money is to get you what you want, so think hard about what you value and put it above money.” – Ray Dalio

Short Money Quotes That You Can Learn a Lot From

47. “Money does not make you happy, but it quiets the nerves.” – Seán O’Casey

48. “Money is like muck—not good unless it be spread.” – Francis Bacon

49. “Money is not the only answer, but it makes a difference.” – Barack Obama

50. “Money may be spent but never squandered.” – Li Ka-Shing

52. “Money grows on the tree of persistence.” – Japanese Proverb

53. “Balancing your money is the key to having enough.” – Elizabeth Warren

Money Quotes to Know How to Manage It Better

54. “Never spend your money before you have it.” – Thomas Jefferson

56. “If money is your hope for independence, you will never have it. The only real security that a man will have in this world is a reserve of knowledge, experience, and ability.” – Henry Ford

57. “The stock market is filled with individuals who know the price of everything, but the value of nothing.” – Philip Arthur Fisher

58. “If you wish to get rich, save what you get. A fool can earn money, but it takes a wise man to save and dispose of it to his own advantage.” – Brigham Young

62. “Don’t tell me where your priorities are. Show me where you spend your money, and I’ll tell you what they are.” – James W. Frick

63. “The habit of saving is itself an education. It fosters every virtue, teaches self-denial, cultivates the sense of order, trains to forethought, and so broadens the mind.” – Thornton T. Munger

65. “I never attempt to make money on the stock market. I buy on the assumption that they could close the market the next day and not reopen it for 10 years.” – Warren Buffett

66. “That man is richest whose pleasures are cheapest.” – Henry David Thoreau

Money Quotes That Are Deep and Meaningful

67. “Money isn’t everything, but it ranks right up there with oxygen.” – Rita Davenport

68. “There are people who have money and people who are rich.” – Coco Chanel

69. “All the money you made will never buy back your soul.” – Bob Dylan

70. “Money can’t buy happiness, but it will certainly get you a better class of memories.” – Ronald Reagan

71. “We have always believed that it’s possible to make money without being evil.” – Larry Page

73. “If you want to know what a man is really like, take notice of how he acts when he loses money.” – Simone Weil

75. “Money is numbers, and numbers never end. If it takes money to be happy, your search for happiness will never end.” – Bob Marley

76. “It doesn’t matter about money. Having it, not having it. Or having clothes, or not having them. You’re still left alone with yourself in the end.” – Billy Idol

77. “Money is like love. It kills slowly and painfully the one who withholds it, and enlivens the other who turns it on his fellow man.” – Kahlil Gibran

78. “If the money we donate helps one child or can ease the pain of one parent, those funds are well spent.” – Carl Karcher

79. “It is a kind of spiritual snobbery that makes people think they can be happy without money.” – Albert Camus

80. “It’s easy to say you don’t care about money when you have plenty of it.” – Ransom Riggs

82. “You can only become truly accomplished at something you love. Don’t make money your goal. Instead, pursue the things you love doing, and then do them so well that people can’t take their eyes off you.” – Maya Angelou

83. “Investing should be more like watching paint dry or watching grass grow. If you want excitement, take $800 and go to Las Vegas.” – Paul Samuelson

84. “So many people of wealth understand much more about making and saving money than about using and enjoying it. They fail to live because they are always preparing to live.” – Alan Watts

85. “If you don’t find a way to make money while you sleep, you will work until you die.” – Warren Buffett

87. “Not having money to spend doesn’t mean we can’t have well-spent moments every day.” – Sarah Ban Breathnach

88. “Money is multiplied in practical value depending on the number of w’s you control in your life: what you do, when you do it, where you do it, and with whom you do it.” – Tim Ferriss

90. “Money is always there, but the pockets change. It is not in the same pockets after a change, and that is all there is to say about money.” – Gertrude Stein

91. “Capital as such is not evil. It is its wrong use that is evil. Capital in some form or other will always be needed.” – Mahatma Gandhi

92. “Money is a tool. Used properly, it makes something beautiful. Used wrong, it makes a mess!” – Bradley Vinson

93. “In investing, what is comfortable is rarely profitable.” – Robert Arnott

94. “When I was young, I thought that money was the most important thing in life, now that I am old, I know that it is.” – Oscar Wilde

95. “Money is a guarantee that we may have what we want in the future. Though we need nothing at the moment it ensures the possibility of satisfying a new desire when it arises.” – Aristotle

96. “Money is power, freedom, a cushion, the root of all evil, the sum of blessings.” – Carl Sandburg

97. “Within certain limits, it is actually true that the less money you have, the less you worry.” – George Orwell

98. “When a fellow says it ain’t the money but the principle of the thing, it’s the money.” – Charles Farrar Browne

99. “Simply put, we don’t build services to make money. We make money to build better services, and we think this is a good way to build something.” – Mark Zuckerberg

100. “Don’t think money does everything or you are going to end up doing everything for money.” – Voltaire

How Do You Decide Where to Spend Your Money?

Money has a significant impact on our lives. It dictates our culture, quality of life, and actions.

Maybe as a kid, we would take the money given to us lightly and spend it without thinking much. But as we become independent and grow into adults, we increasingly feel the effect of our financial decisions in our personal lives. Because of this, we should start spending wisely and investing in our future as early as now.

Hopefully, these quotes were able to give you insight into the role of money for people and the world. Start working on your financial literacy and do your best to reach the top of the ladder!

Did you learn a lot about money from these quotes? Which of these money quotes did you like the most? Comment your answers below!