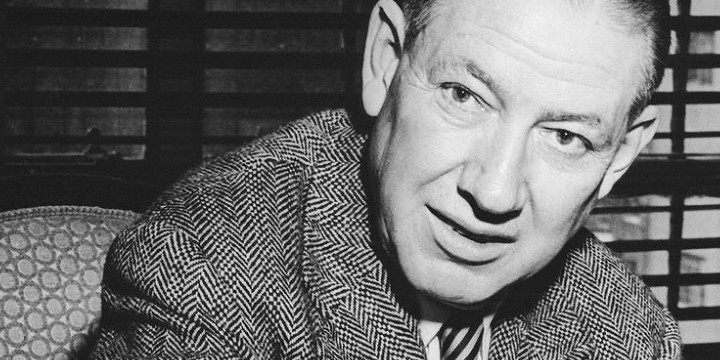 Are you looking for the ultimate collection of the best Ogden Nash quotes? Then you’ve come to the right place!

With a curated list of his top 100 quotes, there’s no shortage to the number of life lessons you can find.

And with topics covering life, marriage, and humor, this list is a great source of entertainment too!

So, let’s dive deep into the lines from one of America’s most famous poets, known for his humorous poetry and light verses.

And don’t forget to check out these F. Scott Fitzgerald quotes and Agatha Christie quotes.

2. “The door of a bigoted mind opens outwards so that the only result of the pressure of facts upon it is to close it more snugly.”

3. “Some tortures are physical and some are mental, but the one that is both is dental.”

4. “Middle-age is when you’re sitting at home on a Saturday night, and the telephone rings, and you hope it isn’t for you.”

5. “Humor is the best means of surviving in a difficult world.”

7. “God in His wisdom made the fly, and then forgot to tell us why.”

8. “Among other things, I think humor is a shield, a weapon, a survival kit.”

9. “Wind is caused by the trees waving their branches.”

The Most Famous Ogden Nash Quotes of All Time

10. “I am a conscientious man—when I throw rocks at seabirds I leave no tern unstoned.”

11. “Time is like the ocean, always there, always different.”

13. “Indeed, everybody wants to be a wow, but not everybody knows exactly how.”

14. “Time is so old and love so brief, love is pure gold and time is a thief. We’re late, darling, we’re late. The curtain descends, everything ends, too soon, too soon.”

17. “Progress might have been alright once, but it’s gone on too long.”

20. “Too much Chablis can make you whablis.”

21. “Some primal termite knocked on wood, and tasted it, and found it good. And that is why your cousin May fell through the parlor floor today.”

23. “The trouble with a kitten is that eventually it becomes a cat.”

26. “The camel has a single hump, the dromedary, two; or else the other way around; I’m never sure. Are you?”

27. “An occasional lucky guess as to what makes a wife tick is the best a man can hope for. Even then, no sooner has he learned how to cope with the tick than she tocks.”

30. “Marriage is the alliance of two people, one of whom never remembers birthdays and the other who never forgets them.”

31. “So I hope husbands and wives will continue to debate and combat over everything debatable and combatable, because I believe a little incompatibility is the spice of life. Particularly, if he has income and she is pattable.”

32. “Don’t over-analyze your marriage; it’s like yanking up a fragile indoor plant every 20 minutes to see how its roots are growing.”

33. “Oh, what a tangled web do parents weave, when they think that their children are naive.”

34. “How confusing the beams from memory’s lamp are; one day a bachelor, the next a grampa. What is the secret of the trick? How did I get so old so quickly?”

35. “All husbands are alike, but they have different faces so you can tell them apart.”

36. “I drink because she nags, she said I nag because he drinks. But if the truth be known to you, he’s a lush and she’s a shrew.”

37. “Marriage is the only known example of the happy meeting of the immovable object and the irresistible force.”

38. “A husband is a guy who tells you when you’ve got on too much lipstick and helps you with your girdle when your hips stick.”

39. “I think remorse ought to stop biting the consciences that feed it.”

40. “If you don’t want to work, you have to work to earn enough money so that you won’t have to work.”

41. “There has been a lot of progress during my lifetime, but I’m afraid it’s heading in the wrong direction.”

42. “Some debts are fun while you are acquiring them, but none are fun when you set about retiring them.”

43. “I would live all my life in nonchalance and insouciance, were it not for making a living, which is rather a nouciance.”

46. “When grandparents enter the door, discipline flies out the window.”

47. “Remorse is violent dyspepsia of the mind.”

48. “The only incurable troubles of the rich are the troubles that money can’t cure, which is a kind of trouble that is even more troublesome if you are poor.”

49. “Life is not having been told that the man has just waxed the floor.”

50. “Happiness is having a scratch for every itch.”

51. “You are much happier when you are happy than when you ain’t.”

52. “When I ponder my mind, I consistently find it is glued on food.”

54. “Certainly, there are lots of things in life that money won’t buy, but it’s very funny—have you ever tried to buy them without money?”

55. “The further through life I drift, the more obvious it becomes that I am lacking in thrift.”

56. “One man’s remorse is another man’s reminiscence.”

57. “The only way I can distinguish proper from improper fractions is by their actions.”

58. “A bird in the open never looks like its picture in the birdie books—or if it once did, it has changed its plumage, and plunges you back into ignorant gloomage.”

59. “I’m like a backward berry, unripened on the vine—for all my friends are fifty, and I’m only forty-nine.”

60. “One thing that literature would be greatly better for would be a more restricted employment by authors of simile and metaphor.”

61. “I do not like to get the news, because there has never been an era when so many things were going so right for so many of the wrong people.”

63. “Authors of all races—be they Greeks, Romans, Teutons, or Celts—can’t seem to just say anything is the thing it is but have to go out of their way to say that it is like something else.”

64. “But all ladies think they weigh too much.”

65. “I have an idea that the phrase ‘weaker sex’ was coined by some woman to disarm some man she was preparing to overwhelm.”

67. “Professional men, they have no cares; whatever happens, they get theirs.”

68. “Poets aren’t very useful because they aren’t consumable or produceful.”

70. “There is something about a martini, where the dining and dancing begin. And to tell you the truth, it is not the vermouth—I think that perhaps it’s the gin.”

71. “Beneath this slab, John Brown is stowed. He watched the ads, and not the road.”

72. “He without benefit of scruples—his fun and money soon quadruples.”

73. “Humor is hope’s companion in arms. It is not brash, it is not cheap, it is not heartless.”

75. “No man is greater than his respect for sleep.”

76. “Here’s a toast to the roast that good fellowship lends, with the sparkle of beer and wine; may its sentiment always be deeper, my friends, than the foam at the top of the stein.”

77. “In another year, I would not boggle except that when I jog, I joggle.”

78. “Snow is alright while it is snowing; it is like inebriation because it is very pleasing when it is coming, but very unpleasant when it is going.”

80. “Neath tile or thatch, that man is rich who has a scratch for every itch.”

82. “How easy for those who do not bulge to not overindulge!”

84. “Then here’s to the heartening wassail, wherever good fellows are found; be its master instead of its vassal, and order the glasses around.”

86. “He is not drunk, who from the floor, can rise and stand and shout for more.”

87. “Why did the Lord give us so much quickness unless it was to avoid responsibility?”

88. “A lady is known by the product she endorses.”

90. “It is the sin of omission—the second kind of sin—that lays eggs under your skin.”

91. “Man is a victim of dope in the incurable form of hope.”

92. “Never befriend the oppressed unless you are prepared to take on the oppressor.”

94. “My garden will never make me famous, I’m a horticultural ignoramus.”

95. “Women would rather be right than reasonable.”

98. “Sleep is as perverse as human nature. Sleep is perverse as a legislature. So people who go to bed to sleep must count French premiers or sheep, and people who ought to arise from bed yawn and go back to sleep instead.”

99. “The only people who should really sin are the people who can sin and grin.”

What Meaning Did You Get From These Lines From Ogden Nash?

Poems carry a lot of weight to them, especially since they can be interpreted in many ways. It gives the world a glimpse into the point of view of the author, but at the same time, it gives the reader a chance to explore his own world view through the poet’s words. Ogden Nash put his heart and soul into writing, even when he started scribbling words into paper when he was only six years old. By honing his craft, he was eventually able to publish several verses which gave us an insight into our human conditions. He made sure his tone and writings were light, so anyone could freely understand and interpret the emotions he was putting into our writing. And though poems are generally subjective, one thing’s for sure—Ogden Nash left countless words of wisdom and humor for all of us to live by.

What lessons did you pick up from this collection? How do you interpret Ogden Nash’s poems? We’d love to hear about your thoughts! Be sure to leave a comment down below.