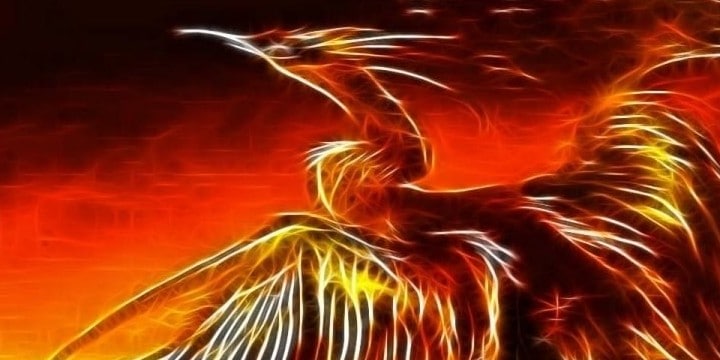 Here are the top 70 phoenix quotes you can check on that will encourage you to fly high and reach the sky of victory.

In the modern world, we associate phoenix as an individual who arose from a devastating event in life and being completely destroyed but came back with a new rage of hope and confidence.

So, if you want some quotes to motivate and become the phoenix version of yourself this collection is perfect for you.

And don’t forget to check out these bird quotes and owl quotes too.

1. “I no longer feared the darkness once I knew the phoenix in me would rise from the ashes.” – William C. Hannan

3. “Whether we remain the ash or become the Phoenix is up to us.”- Ming-Dao Deng

4. “Stars are phoenixes, rising from their own ashes.” – Carl Sagan

5. “In order to rise from its own ashes, a phoenix first must burn.” – Octavia Butler

6. “A heart filled with love is like a phoenix that no cage can imprison.” – Rumi

7. “Don’t hoard the past. Don’t cherish anything. Burn it. The artist is the phoenix who burns to emerge.” – Janet Fitch

8. “From a crow’s nest, a phoenix may emerge.” – Chinese Proverb

9. “Sometimes you have to burn yourself to the ground before you can rise like a phoenix from the ashes.” – Jens Lekman

10. “I can feel a phoenix inside of me. I can see the heavens, but I still hear the flames calling out my name.” – Katy Perry

11. “If there is in fact, a heaven and a hell, all we know for sure are that hell will be a viciously overcrowded version of Phoenix.” – Hunter S. Thompson

12. “Who has not been amazed to learn that the function y = ex, like a phoenix rising from its own ashes, is its own derivative?” – Francois Le Lionnais

13. “There was a silly damn bird called a phoenix back before Christ, every few hundred years he built a pyre and burnt himself up. He must have been the first cousin to Man.” – Ray Bradbury

14. “But from the ashes of old humanity, new humanity shall arise like the phoenix.” – Joe Dixon

15. “Our greatest glory is not in never falling, but in rising every time we fall.” – Confuscious

16. “Life tried to crush her, but only succeeded in creating a diamond.” – John Mark Green

17. “Fawkes is a phoenix, Harry. Phoenixes burst into flame when it is time for them to die and are reborn from the ashes.” – J.K. Rowling

18. “Like a phoenix from the ashes, they may defeat you, burn you, insult you, injure you, and abandon you. But they will not, shall not, and cannot destroy you. For you, like Rome, were built on ashes, and you, like a phoenix, know how to resurrect.” – Nikita Gill

19. “And God helps you if you are a phoenix, and you dare to rise up from the ash. A thousand eyes will smolder with jealousy while you are just flying past.” – Ani DiFranco

20. “The wild woman rises like a phoenix from the ashes of her life, to become the heroine of her own legend.” – Shikoba

21. “Only the phoenix rises and does not descend. And everything changes. And nothing is truly lost.” – Neil Gaiman

22. “Once you’ve had your life burn down, it takes time to be a Phoenix.” – Sharon Stone

23. “The phoenix. The gentlest and most wonderful of its kind. Mesmerizing beauty and brilliant color. Its cry synonymous to a lovely song. But comes time consumes itself in its own magnificent flame. And from its own ashes, will rise and reborn anew.” – Kahit Minsan

24. “Let us help the phoenix to rise from the ashes; let us help lay the foundation for a new renaissance; let us help to accelerate the spiritual awakening until it lifts us into the golden age which would come.” – Peace Pilgrim

25. “Like the phoenix, socialism is reborn from every pile of ashes left day in, day out, by burnt-out human dreams and charred hopes.” – Zygmunt Bauman

26. “Dead news like dead love has no phoenix in its ashes.” – Enid Bagnold

27. “Up then, fair phoenix bride, frustrate the sun; thyself from thine affection, takest warmth enough, and from thine eye, all lesser birds will take their jollity.” – John Donne

28. “From the ashes, a fire shall be woken, a light from the shadows shall spring; renewed shall be blade that was broken, the crownless again shall be king.” – Arwen

29. “For a star to be born, there is one thing that must happen: a gaseous nebula must collapse. So collapse. Crumble. This is not your destruction. This is your birth.” – Zoe Skylar

30. “Nor shall this peace sleep with her; but as when the bird of wonder dies, the maiden phoenix, Her ashes new create another heir As great in admiration as herself.” – William Shakespeare

31. “Faith is the bird that feels the light and sings when the dawn is still dark.” – Rabindranath Tagore

32. “Ready must thou be to burn thyself in thine own flame; how couldst thou become new if thou have not first become ashes!” – Friedrich Nietzsche

33. “You may kill a fire. And everything you know falls to dust and ash. Yet the remarkable treasure in this seemingly hopeless pile is hidden deep within. The burning embers incarnate the perpetual desire to go from spark to flame.” – Akilnathan Logeswaran

34. “She told me she’d be a phoenix. The image of the mythical creature rising from the ashes glitters in my mind. They don’t really exist. She said that depends on whether or not there’s someone who can see them.” – Jodi Picoult

35. “Madness is a regenerating thing. Like a phoenix, when one strand dies, another burns anew.” – Chris Galford

37. “A phoenix is a majestic and magical bird. While it appears healthy and happy most of the time, every, so often it must renew itself by shedding all of its feathers and bursting into flame.” – Princess Celestia

38. “Which came first, the phoenix or the flame?… I think the answer is that a circle has no beginning.” – J. K. Rowling

39. “Well, it’s named after a mythical bird, which, when it felt its life draw to a close, would build a funeral pyre, and light it by fanning its wings and then burn itself to death. But from those ashes, the phoenix would be reborn and live on another 500 years. Ancient Egyptian legend.” – Laura Collins

40. “Hope rises like a phoenix from the ashes of shattered dreams.” – S.A. Sachs

41. “Often it’s the deepest pain which empowers you to grow into your highest self.” – Karen Salmansohn

42. “Darling, you’re not falling apart. You’re getting rid of the pieces that no longer serve your purpose, this is a surgery of the spirit, and it can be painful as hell.” – Kalen Dion

43. “Sometimes you have to kind of die inside in order to rise from your own ashes and believe in yourself and love yourself to become a new person.” – Gerard Way

44. “Sometimes the worst thing that happens to you, the thing you think you can’t survive… it’s the thing that makes you better than you used to be.” – Jennifer Weiner

45. “She never seemed shattered; to me, she was a breathtaking mosaic of the battles she’s won.” – Matt Baker

46. “There can be no rebirth without a dark night of the soul, a total annihilation of all that you believed in and thought that you were.” – Vilayat Inayat Khan

48. “Like the Phoenix, I have risen from the ashes. And into my fire, you shall fall.” – Shredder

49. “We are like the phoenix, said Abuelita. Rising again, with a new life ahead of us.” – Pam Muñoz Ryan

50. “And just as the Phoenix rose from the ashes, she too will rise. Returning from the flames, clothed in nothing but her strength, more beautiful than ever before.” – Shannen Heartz

51. “It’s best to have failure happen early in life. It wakes up the Phoenix bird in you, so you rise from the ashes.” – Anne Baxter

52. “Suffering can lead to transformation. And redemption. And marvelous mystery.” – Dr. Allen Hunt

53. “Here in this suffering, all previous beliefs are called into question. They are consumed in the fire sparked and fueled by our own illusion. The pain becomes the ashes we are now entombed in. It is only when we find ourselves at this most imprisoned of junctures that we emerge again, the phoenix of our very life which is ever so much more beautiful than the last one.” – Teal Swan

54. “I can be changed by what happens to me. But I refuse to be reduced by it.” – Maya Angelou

55. “Out of suffering have emerged the strongest souls; the most massive characters are seared with scars.” – Kahlil Gibra

56. “We are more than the worst thing that’s ever happened to us. All of us need to stop apologizing for having been to hell and come back breathing.” – Clementine von Radics

57. “And once the storm is over, you won’t remember how you made it through, how you managed to survive. You won’t even be sure whether the storm is really over. But one thing is certain. When you come out of the storm, you won’t be the same person who walked in. That’s what this storm’s all about.” – Haruki Murakami

59. “You think me a boy of privilege, that I do not know pain. I have been tested by many, more powerful than you, yet here I stand. I have risen from the flames before, and I will rise in them again, a phoenix.” – Cesare Borgia

60. “And let it direct your passion with reason, that your passion may live through its own daily resurrection, and like the phoenix rises above its own ashes.” – Khalil Gibran

61. “Our passion ignites us. Rapture spawns the inferno in which we perish, entwined. From smoldering coals we are formed and, from our ashes, we rise. Discovered in the aftermath, our memory, our birth scars; third-degree madness. Identical imperfections. Forever branded.” – Lennon Hodson

62. “Our passions are the true phoenixes; when the old one is burnt out, a new one rises from its ashes.” – Johann Wolfgang von Goethe

63. “The phoenix hope, can wing her way through the desert skies, and still defying fortune’s spite; revive from ashes and rise.” – Miguel de Cervantes

64. “What matters most is how well you walk through the fire.” – Charles Bukowski

66. “Temper us in fire, and we grow stronger. When we suffer, we survive.” – Cassandre Clare

67. “And when all that was left was ashes, she would again clothe herself in flame. Rising from the dust of her past to rekindle the spark of her future. She was a Phoenix, her own salvation; rebirthed, renewed, resurrected.” – LaRhonda Toreson

68. “And glory, like the phoenix midst her fires, exhales her odors, blazes, and expires.” – Lord Byron

Do You Want to See a Real Phoenix Rising From the Ashes?

The phoenix is a Greek mythological bird known throughout all ages and cultures. When it dies, the bird blasts into flames and is reborn from its ashes, making it immortal.

We can learn a lesson from a phoenix that whatever challenges in life might destroy us, we can get back and start again to reach our dreams and goals in life.

Did you get inspired by these phoenix quotes? Let us know in the comment section below, what are your thoughts and opinions.