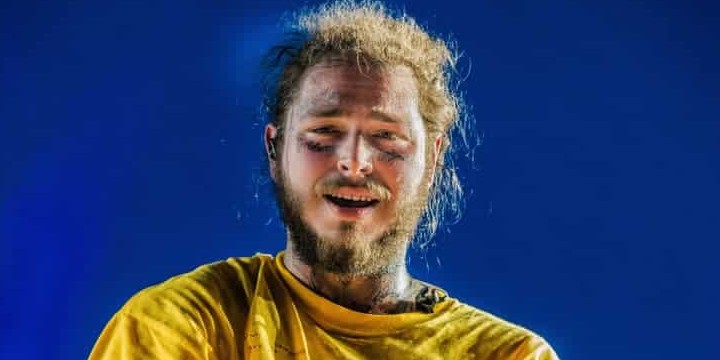 Take some time to read and be inspired by the best 150 Post Malone quotes about his life and career in music.

These quotes will definitely help you start your day off positively!

Austin Richard Post was known as Post Malone in his early years as an American rapper and performer.

In a matter of months, he went from poverty to stardom—most known for his breakthrough single, “White Iverson”, which was a Billboard Hot 100 chart-topper.

Post Malone has now collaborated with some of Hollywood’s greatest names and is acknowledged as a musical genius.

Take a look at the list below for some of his greatest quotes.

And make sure to read these Kid Cudi quotes and Juice WRLD quotes.

1. “Best thing you can do is boss up mentally and financially.”

2. “I am just creating the music I enjoy making, and people seem to enjoy it.”

3. “It has been wild, you know? I started out just putting a song that I made out on the Internet without being sure if anyone was going to like it, and it took me on tour around the world with Justin Bieber. It’s been amazing!”

4. “Your growth scares people who don’t want to change.”

5. “I don’t care who talks about me because when I come around nothing is said to me.”

6. “Surround yourself around people who want to see you grow.”

7. “Everybody’s blind when the view’s amazing.”

10. “As an artist, it’s never really enough. You always want to strive to get bigger and better and push the limits of what you can actually do.”

12. “I just want to keep making music and see where everything goes.”

13. “Nobody wanted me to put out White Iverson. They said, ‘Wait.’ I said, ‘I don’t have time to wait. I don’t have any money, what am I going to lose?’ I put it out the next day and it went bananas.”

16. “The right person by your side will have you saving money, living better, making moves, and laughing constantly.”

17. “I want to meet someone who makes me feel the way music does.”

18. “I dreamed it all ever since I was young. They said I wouldn’t be nothing. Now they always say, ‘Congratulations, congratulations!’”

23. “It’s not normal for a white guy to get cornrows—a lot of people judged me. I like the way it looks, so you have to be confident.”

27. “You just go with the flow because life is just all about how you feel.”

29. “Don’t try to change anyone, change how you deal with them.”

38. “I’m trying to bring a little bit of every type of sauce into one type of sound. Something that’s really fresh.”

39. “I’m trying to make music that I like, and I love hip-hop. At the same time, I love guitar. I love rock and everything.”

41. “I think a show is more about interacting with fans than just singing songs.”

46. “I fell in love with your personality, your looks are just a bonus.”
47. “I never thought that it would hit this hard.”

49. “Because no matter how my life has changed, I keep on looking back on better days.”

52. “Tell me that it’s all okay. I’ve been waiting on this all damn day. Call me in the morning, tell me how last night went. I’m here.”

53. ”Never caught a feelin’ this hard, harder than the liquor I pour. Tell me you don’t want me no more. But I can’t let go.”

54. “Can we have a little conversation? Figure it out with no intoxication. We carry on, what is our motivation? We’re never wrong, how the hell we gonna make it?”

55. “Rosé poppin’ with the balmain on me, and I keep on callin’ and they know that I don’t answer my cell. No, I don’t know your momma, I got so much commas. Girl, you know I’m only into myself.”

56. “My roof looks like a no-show, got diamonds by the boatload. Come with the Tony Romo for clowns and all the bozos.”

59. “All this damn jewelry I bought. You were my shorty, I thought.”

61. “I told my parents two weeks before I was leaving that I’m not going to school anymore and I’m going to LA.”

62. “I felt special. Until I realized you talk to everybody like that.”

64. “There are times when pop music is the end result when I’m in the studio, but I don’t really go in and say, ‘Today I am going to make a pop song,’ but it can happen.”

67. “You know that I’m too drunk to talk right now. You put your cigarette out on my face.”

69. “In New York, my dad raised me to listen to everything like hip-hop, rock and country music. When I moved to Dallas, I started listening to whatever I wanted to listen to.”

70. “Can’t really trust nobody with all this jewelry on you.”

72. “Hip-hop and country aren’t too far different—they got shiny suits and the boots and the guitars with their names on it.”

74. “I got FL studios—I looked up how to make beats and how to record myself, and then I just started making music from there.”

75. “When I was up in New York, the first record my parents bought me was the Terror Squad record with ‘Lean Back.’”

79. “The lifestyle we live is too dangerous.”

81. “She told me that I’m not enough. And she left me with a broken heart. She fooled me twice and it’s all my fault. She cut too deep, now she left me.”

83. “Twenty candles, blow ’em out and open your eyes. We were lookin’ forward to the rest of our lives. Used to keep my picture posted by your bedside. Now it’s in your dresser with the socks you don’t like.”

84. “I just keep on hopin’ that you call me. You say you wanna see me, but you can’t right now. You never took the time to get to know me, I was scared of losin’ somethin’ that we never found. We’re running out of reasons, but we can’t let go. Yeah, Hollywood is bleeding, but we call it home.”

87. “Said you’d take a bullet, told me you would die for me. I had a really bad feeling you’d been lying to me. We were on the low, but you were getting high with me. When it’s past 11, that’s a different side I see.”

88. “Instead of holdin’ me down you’re only holding me up. It shouldn’t be so hard, this is impossible love, allergic.”

96. “If you keep staring at the sun you won’t see what you’ve become.”

113. “Get more bottles, these bottles are lonely.”

114. “Diamonds going crazy like they on the dance floor.”

123. “Now your momma needs tickets to my stadium show, she loves it when she hears me on the radio.”

135. “All this American dreaming everybody’s sick of believing.”

141. “There were some times when I just wanted to quit making music.”

143. “This dude just f*ck*ng died and everyone takes it a prime opportunity to shame people who may have issues with drugs.”

Did These Post Malone Quotes Motivate You to Go Above and Beyond in Your Work?

People and his fans are still in awe of Post Malone’s meteoric rise to fame in such a short amount of time. But despite this, we still can’t deny that his work has a significant impact on the music industry in our generation.

Post Malone’s music appears to have an impact on our everyday life. In the case of the current generation, people were careless about how they performed their duties. They seemed unconcerned about anything, but Post Malone teaches us to be extra in whatever we do.

In addition, he reminds us that success will come if we are willing to commit more time and energy to the thing we love most. May these quotes give you ideas and inspiration to be more like Post Malone, and maybe someday success will come to you as well!