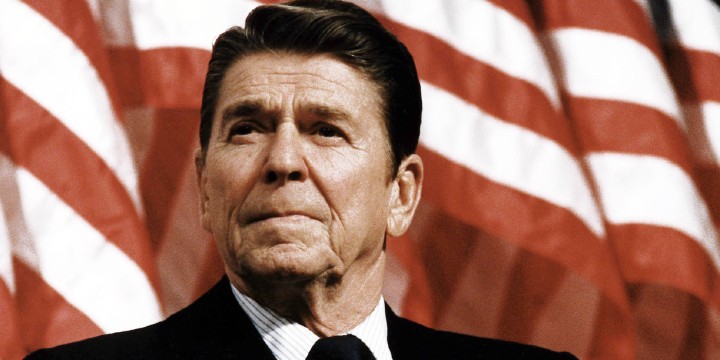 These Ronald Reagan quotes are full of wisdom that will open your mind about politics and governance!

During his time as the 40th president of the United States, Ronald Reagan significantly contributed to the end of the Cold War. But, aside from that, he’s also famous for being a Hollywood actor before his political career.

He was also one of the best public speakers in America during his time, maybe even today. He connected with millions of Americans and gave them hope with his wise messages.

Check out the complete list of his most inspiring words below.

And make sure to read these Alexander Hamilton quotes and John Adams quotes.

1. “We can’t help everyone, but everyone can help someone.”

2. “There is no limit to the amount of good you can do if you don’t care who gets the credit.”

3. “When you can’t make them see the light, make them feel the heat.”

4. “My philosophy of life is that if we make up our mind what we are going to make of our lives, then work hard toward that goal, we never lose. Somehow we win out.”

5. “Man is not free unless government is limited.”

7. “I know in my heart that man is good, that what is right will always eventually triumph, and there is purpose and worth to each and every life.”

8. “The future doesn’t belong to the light-hearted. It belongs to the brave.”

9. “Never let the things you can’t do stop you from doing what you can.”

11. “A nation that cannot control its borders is not a nation.”

12. “If we ever forget that we’re one nation under God, then we will be one nation gone under.”

14. “The most terrifying words in the English language are: I’m from the government and I’m here to help.”

15. “Politics is not a bad profession. If you succeed there are many rewards, if you disgrace yourself you can always write a book.”

16. “A people free to choose will always choose peace.”

17. “Government’s first duty is to protect the people, not run their lives.”

18. “Peace is not the absence of conflict, it is the ability to handle conflict by peaceful means.”

19. “The future doesn’t belong to the fainthearted; it belongs to the brave.”

20. “Protecting the rights of even the least individual among us is basically the only excuse the government has for even existing.”

21. “Let us be shy no longer. Let us go to our strength. Let us offer hope. Let us tell the world that a new age is not only possible but probable.”

22. “Our government needs the church because only those humble enough to admit they’re sinners can bring democracy the tolerance it requires to survive.”

23. “There are no such things as limits to growth because there are no limits to the human capacity for intelligence, imagination, and wonder.”

24. “Above all, we must realize that no arsenal, or no weapon in the arsenals of the world, is so formidable as the will and moral courage of free men and women.”

25. “We are a nation that has a government—not the other way around.”

26. “There are no constraints on the human mind, no walls around the human spirit, no barriers to our progress except those we ourselves erect.”

Wise Ronald Reagan Quotes That Will Give Courage

28. “We must be cautious in claiming God is on our side. I think the real question we must answer is, are we on His side?”

32. “No matter what your background, no matter how low your station in life, there must be no limit on your ability to reach for the stars, to go as far as your God-given talents will take you. Trust the people; believe every human being is capable of greatness, capable of self-government.”

33. “There is no humanity or charity in destroying self-reliance, dignity, and self-respect.”

34. “Preparing for the future must begin, as always, with our children. We need to set for them new and more rigorous goals.”

35. “Freedom is one of the deepest and noblest aspirations of the human spirit.”

36. “If we lose freedom here, there is no place to escape to. This is the last stand on the earth.”

37. “If there’s one observation that rings true in today’s changing world, it is that freedom and peace go hand in hand.”

38. “Freedom prospers when religion is vibrant and the rule of law under God is acknowledged.”

39. “Freedom is the right to question and change the established way of doing things.”

40. “Freedom is never more than one generation away from extinction. We didn’t pass it to our children in the bloodstream. It must be fought for, protected, and handed on for them to do the same.”

41. “If freedom, democracy, and the rights of man are to be preserved through the ages, free men and women must accept the responsibilities that go with their freedoms.”

42. “We welcome change and openness; for we believe that freedom and security go together, that the advance of human liberty can only strengthen the cause of world peace.”

43. “Our natural, inalienable rights are now considered to be a dispensation from the government, and freedom has never been so fragile, so close to slipping from our grasp as it is at this moment.”

44. “Someday, the realm of liberty and justice will encompass the planet. Freedom is not just the birthright of the few, it is the God-given right of all His children, in every country. It won’t come by conquest. It will come because freedom is right and freedom works. It will come because cooperation and goodwill among free people will carry the day.”

45. “There can be no freedom without order, and there is no order without virtue. Now, that’s a simple enough formulation, but it’s an insight found not only in the writings of Founding Fathers like Washington or great political thinkers like Edmund Burke; it is also found in a great part of our Judeo-Christian tradition.”

46. “Socialism only works in two places: Heaven where they don’t need it and hell where they already have it.”

47. “Socialists ignore the side of man that is the spirit. They can provide you shelter, fill your belly with bacon and beans, treat you when you’re ill, all the things guaranteed to a prisoner or a slave. They don’t understand that we also dream.”

49. “As I have often said, governments don’t produce economic growth, people do.”

50. “Government’s view of the economy could be summed up in a few short phrases: if it moves, tax it. If it keeps moving, regulate it. And if it stops moving, subsidize it.”

52. “If no one among us is capable of governing himself, then who among us has the capacity to govern someone else?”

53. “Surround yourself with the best people you can find, delegate authority, and don’t interfere as long as the policy you’ve decided upon is being carried out.”

54. “We must reject the idea that every time a law’s broken, society is guilty rather than the lawbreaker. It is time to restore the American precept that each individual is accountable for his actions.”

Ronald Reagan Quotes That Zoom in on Government and Politics

55. “Government does not solve problems. It subsidizes them.”

57. “I’ve never been able to understand why a Republican contributor is a fat cat and a Democratic contributor of the same amount of money is a public-spirited philanthropist.”

58. “Democracy is worth dying for because it’s the most deeply honorable form of government ever devised by man.”

59. “No government ever voluntarily reduces itself in size. Government programs, once launched, never disappear. Actually, a government bureau is the nearest thing to eternal life we’ll ever see on this earth!”

60. “Government is like a baby: an alimentary canal with a big appetite at one end and no sense of responsibility at the other.”

Did These Ronald Reagan Quotes Inspire You to Contribute to the Betterment of Your Nation?

Ronald Reagan was a Hollywood actor, and he also served as a governor of California before he became president. These careers helped solidify his reputation and influence in the nation.

As the president, he was the voice of America during good times and grief. He used his communication skills to inspire and encourage Americans to be optimistic no matter what challenges they face. Through his words and speeches, he gave hope to the country’s future leaders.

So, let these quotes remind you of your role in protecting and raising your nation. Remember that each individual has the power to touch someone else’s life. Though nothing will ever come easy, keep in mind that optimism and courage are all we need to surpass everything.

Which of these quotes struck you the most? Feel free to join the discussion below!