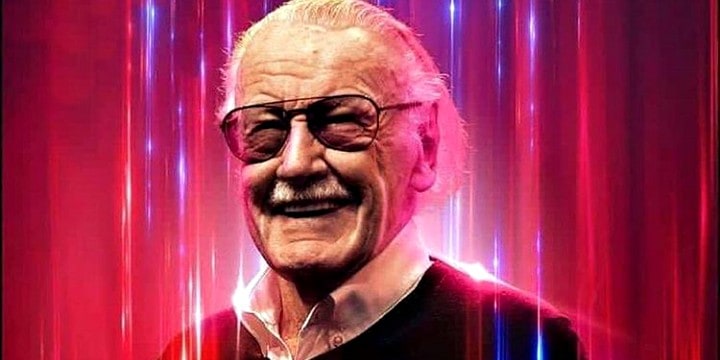 These Stan Lee quotes will bring you into the world of superheroes and teach you lessons that you can bring with you all throughout your life.

So, if you’re looking for some quotes that will boost your mood or guide you through the next couple of days, then you’ll definitely need to check this out!

Stan Lee is one of the greatest pioneers and visionaries of all time—leaving behind a legacy in the superhero and comic worlds in the form of iconic characters like Iron Man and Spider-Man.

You’ll definitely want to hear what this man has to say about life and superheroes!

And make sure to read these Virginia Woolf quotes and Charles Dickens quotes.

3. “If you are interested in what you do, that keeps you going.”

5. “The power of prayer is still the greatest ever known in this endless eternal universe.”

6. “If you’re writing about a character—if he’s a powerful character—unless you give him vulnerability, I don’t think he’ll be as interesting to the reader.”

7. “I don’t have inspiration. I only have ideas. Ideas and deadlines.”

8. “To tell you the truth, I never thought of myself as much of a success.”

9. “Negative information is that which, immediately upon acquiring, causes the recipient to know less than he did before.”

11. “The world has always been a comic book world to me.”

18. “I guess one person can make a difference.”

20. “Comics are stories; they’re like novels or anything else. So the first thing you have to do is become a good storyteller.”

21. “No matter how good a story is, if you’re at a newsstand and you see a lot of comic books, you don’t know how good the story is unless you read it. But you can spot the artwork instantly, and you know whether you like the artwork, whether it grabs you or not.”

22. “I thought it would be great to do superheroes that have the same kind of life problems that any reader—that anybody could have.”

23. “There’s just something that feels nice about holding a comic book!”

24. “I enjoyed reading Batman, and Superman, and all the super ones, but I never wished I created them. I’ve got to let there be some work for other people!”

25. “I think the way you become a good storyteller is to read a lot of stories and evaluate them in your own mind.”

26. “I see myself in everything I write. All the good guys are me.”

27. “Whosoever holds this hammer, if he be worthy, shall possess the power of Thor.”

28. “Coming from your friendly neighborhood Spider-Man!”

29. “I had a publisher who felt comics were just for little kiddies, so he never wanted me to use words of more than two syllables.”

30. “While no one is expected to leap tall buildings in a single bound, our aspiring heroes will be tested on their courage, integrity, self-sacrifice, compassion and resourcefulness—the stuff of all true superheroes.”

31. “The cliché I tried to avoid was that I hated teenage sidekicks. I always figured if I were a superhero, there’s no way on God’s earth that I’m gonna pal around with some teenager. So my publisher insisted I have a teenager in the series, because they always felt teenagers won’t read the books unless there’s a teenager in the story; which is nonsense.”

32. “I have a reputation for doing superheroes, but I like all kinds of writing. In fact, hardly anybody knows this, but I’ve probably written as many humor stories as superhero stories.”

33. “I had been writing comic books for years and I was doing them to please a publisher, who felt that comics are only read by very young children or stupid adults. And therefore, we have to keep the stories very simplistic. And that was the thing I hated.”

34. “I like Spider-Man because he’s become the most famous. He’s the one who’s most like me—nothing ever turns out 100% okay; he’s got a lot of problems, and he does things wrong, and I can relate to that.”

35. “My biggest regret is that I don’t really have time to read.”

37. “Marvel is a cornucopia of fantasy, a wild idea, a swashbuckling attitude, an escape from the humdrum and prosaic. It’s a serendipitous feast for the mind, the eye, and the imagination, a literate celebration of unbridled creativity, coupled with a touch of rebellion and an insolent desire to spit in the eye of the dragon.”

38. “I think almost everybody enjoyed fairy tales when they were young, tales of witches and ogres and monsters and dragons and so forth. When you get a little bit older, you can’t read fairy tales anymore.”

39. “I’ll be the ultimate judge. It’s a great responsibility, and I take it very seriously. It’s a great weight on my shoulders and I just hope that I will be up to this test. Because the eyes of the world will be upon us.”

Stan Lee Quotes on Life and Having Fun

42. “No one has a perfect life. Everybody has something that he wishes was not the way it is.”

43. “The world has always been like a comic book world to me!”

44. “Life is never completely without challenges.”

46. “And now, until we meet again, may the blessings of Asgard be showered upon you!”

47. “I have never had a lap dance in Tampa or any other part of Florida. If I ever did have a lap dance, I don’t think I would be discussing television ideas with the girl that was giving it to me.”

48. “Singing a song, playing sports—anything that entertains, that takes people away from their own problems, is good.”

50. “Wolverine is one of the best characters ever created in fiction. I blew it by not coming up with the idea first.”

53. “Luck’s a revolving door, you just need to know when it’s your time to walk through.”

54. “Fans are almost always nice. I really find that they rarely come on too strong.”

55. “It’s fun doing something that hasn’t been done before.”

56. “So I’m happiest when I’m working with artists and writers, and involved in stories, whether we’re talking about animation or movies or comics or television.”

58. “The pleasure of reading a story and wondering what will come next for the hero is a pleasure that has lasted for centuries and, I think, will always be with us.”

59. “I suppose I have come to realize that entertainment is not easily dismissed. Beyond the meaning of a work of art, it is important to people. Without it, lives can be dull.”

61. “I don’t analyze things too closely. I find the more you analyze, the more you get away from spontaneity.”

62. “I always figure I’m not unique, and something that would please me hopefully would please a lot of other people that have the same tastes that I do.”

64. “I’ve been the luckiest man in the world because I’ve had friends, and to have the right friends is everything—people you can depend on, people who tell you the truth if you ask something.”

65. “You know, I guess one person can make a difference.”

66. “I never understood why people take drugs. They’re habit forming and they can kill you. I didn’t need anything to pep me up or make me feel more creative, and I didn’t need them to help me with women.”

67. “Just because you have superpowers, that doesn’t mean your love life would be perfect. I don’t think superpowers automatically means there won’t be any personality problems, family problems or even money problems. I just tried to write characters who are human beings who also have superpowers.”

68. “Let’s lay it right on the line. Bigotry and racism are among the deadliest social ills plaguing the world today. But, unlike a team of costumed super-villains, they can’t be halted with a punch in the snoot, or a zap from a ray gun. The only way to destroy them is to expose them—to reveal them for the insidious evils they really are.”

69. “Wherever we find news, excitement, mystery and adventure, there, too, we find the newspaper reporter. Always on the alert for something new, ready to risk his very life for a scoop and finding adventure in every corner of the globe.”

71. “The only advice anybody can give is if you want to be a writer, keep writing. And read all you can, read everything.”

72. “For years, kids have been asking me what’s the greatest superpower. I always say luck. If you’re lucky, everything works. I’ve been lucky.”

73. “I have always included minority characters in my stories, often as heroes. We live in a diverse society—in fact, a diverse world, and we must learn to live in peace and with respect for each other.”

74. “America is made of different races and different religions, but we’re all co-travelers on the spaceship Earth and must respect and help each other along the way.”

75. “Another definition of a hero is someone who is concerned about other people’s well-being and will go out of his or her way to help them–even if there is no chance of a reward. That person who helps others simply because it should or must be done, and because it is the right thing to do, is indeed without a doubt, a real superhero.”

76. “Every day, there’s a new development. There’s no limit to the things that are happening.”

77. “We’re living in a world where everything moves very quickly. We’ve become a very visual society, so I think it’s a very natural thing that people are captivated by the illustrations in a story.”

79. “Achilles, without his heel, you wouldn’t even know his name today.”

What Lessons Did You Pick Up From Stan Lee’s Legacy?

Stan Lee is a game-changer in the world of entertainment who was able to inspire millions of people across the globe—both young and old. He created characters and superheroes that everyone can relate to because of the way he portrayed them. His characters—no matter if they’re superheroes, villains, or ordinary people—were always created with flaws. They were never perfect no matter how revered they were in their worlds. He gave them shortcomings and failures that they had to face and address in the story. This is what made Stan Lee’s characters so human and so relatable even in real life. They told stories of persistence, humility, and human nature.

Who’s your favorite among Stan Lee’s characters? What did you learn most from Stan Lee? List them down below.