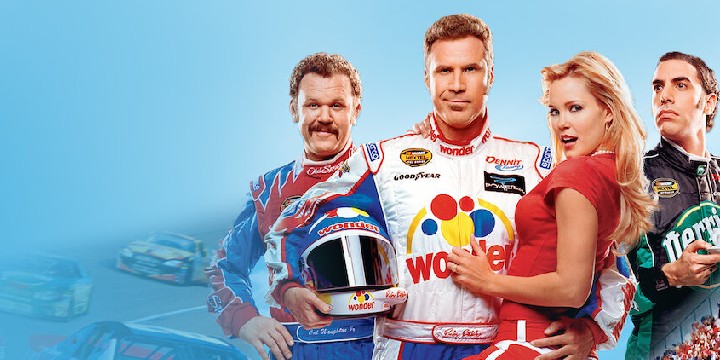 Read these top Talladega Nights quotes if you need reminders and sources of motivation to stand up again after a loss.

Ricky Bobby accepts the challenge to see who’s faster. Unfortunately, he crashed due to the pressure he put upon himself, and his subsequent performances after the event weren’t that good. Thus, Ricky Bobby was kicked off the team.

Wallowing in sadness, Ricky got depressed. However, he soon learned to stand up on his own two feet again with the help of his dad. Apart from regaining the motivation to race, Ricky also understood the true meaning of winning.

And don’t forget to check out these Ricky Bobby quotes and Anchorman quotes.

1. “You gotta learn to drive with the fear, and there ain’t nothing more goddamn frightening than driving with a live cougar in the car.” – Reese Bobby

2. “Like the frightened baby chipmunk, you are scared by anything that is different.” – Jean Girard

4. “Here’s the deal—I’m the best there is. Plain and simple. I wake up in the morning, and I piss excellence.” – Ricky Bobby

5. “Ricky, remember: the field mouse is fast, but the owl sees at night.” – Chip

6. “You’ve gotta cross over the anger bridge and come back to the friendship shore.” – Cal Naughton, Jr.

7. “Did that blow your mind? Because that just happened!” – Ricky Bobby

9. “I came here to tell you one thing: come race time tomorrow, I’m coming for you.” – Ricky Bobby

Ricky Bobby: “No one lives forever, no one. But with advances in modern science and my high-level income, it’s not crazy to think I can live to be 245, maybe 300. Heck, I just read in the newspaper that they put a pig heart in some guy from Russia. Do you know what that means?”

Lucius Washington: “No, I don’t know what that means. I guess longer life.”

Ricky Bobby: “No, he didn’t live. It’s just exciting that we’re trying things like that.”

14. “You sound like a dog with peanut butter on the roof of your mouth.” – Ricky Bobby

Talladega Nights Quotes to Keep In Your Heart

15. “This sticker is dangerous and inconvenient, but I do love Fig Newtons.” – Ricky Bobby

16. “Help me, Jesus! Help me, Jewish God! Help me, Allah! Help me, Tom Cruise! Tom Cruise, use your witchcraft on me to get the fire off me! Help me, Oprah Winfrey!” – Ricky Bobby

17. “Well, let me give you a saying from Colonel Sanders. I am too drunk to taste this chicken.” – Ricky Bobby

18. “But before I can do that, I must be beaten by a driver who is truly better than me.” – Jean Girard

Ricky Bobby: “From now on, you’re the Magic Man, and I’m El Diablo.”

20. Susan: “It’s because it’s what you love, Ricky. It is who you were born to be. And here you sit, thinking, ‘Well, Ricky Bobby is not a thinker. Ricky Bobby is a driver. He is a doer.’ And that’s what you need to do. You don’t need to think. You need to drive. You need speed. You need to go out there, and you need to rev your engine. You need to fire it up. You need to grab a hold of that line between speed and chaos, and you need to wrestle it to the ground like a demon cobra! And then, when the fear rises up in your belly, you use it. And you know that fear is powerful because it has been there for billions of years. And it is good. And you use it. And you ride it; you ride it like a skeleton horse through the gates of Hell, and then you win, Ricky. You win! And you don’t win for anybody else. You win for you, you know why? Because a man takes what he wants. He takes it all. And you’re a man, aren’t you? Aren’t you?”

Ricky Bobby: “Susan, I’ve never heard you talk like that. Are we about to get it on? Because I’m as hard as a diamond in an ice storm right now.”

Talladega Nights Quotes That Will Make You Laugh All Day

22. “May God be with you, Monsieur Bobby. Because although today I am friendly, tomorrow will be war!” – Jean Girard

29. “You better shut the hell up, or I’ll come over there and rip a hole in that tent!” – Texas Ranger

30. “Dear Lord Baby Jesus, or as our brothers to the south call you, Jesús, we thank you so much for this bountiful harvest of Domino’s, KFC, and the always delicious Taco Bell. I just want to take time to say thank you for my family, my two beautiful, beautiful, handsome, striking sons, Walker and Texas Ranger, or T.R. as we call him, and of course, my red-hot smoking wife, Carley, who is a stone-cold fox.” – Ricky Bobby

Did These Quotes Change What Winning Means for You?

It’s easy to get blinded by fame and success. Sometimes, we feel it’s impossible for someone else to step in and better us. However, that’s not the case, especially in real life.

Through Talladega Nights, we learn two valuable lessons: standing up again after a defeat and understanding what it truly means to win. Ricky Bobby failed many times and even got kicked off the team. However, he regained his motivation and devotion to the sport with the help of his dad.

Ricky Bobby slowly regained the drive to win back his position. At the same time, he had a newfound understanding and love for the sport, making him even more passionate and driven about it.

Plus, Ricky Bobby also understood the true meaning of winning. At the end of the movie, after winning the race, he explains to his dad that life isn’t all about winning the race anymore. After all, what’s important is that he has friends and family waiting for him, whether he finishes the race first or not.

It’s truly remarkable how a comedy movie such as Talladega Nights can help us reflect on different aspects of life. With that, we hope we were able to provide you with some new wisdom through this list of Talladega Nights quotes. Feel free to revisit our collection if you need some motivation!