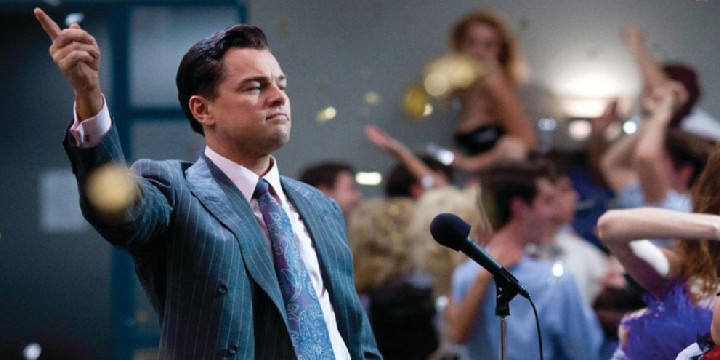 To relive Jordan Belfort’s incredible story, we’ve compiled a list of all of your favorite The Wolf of Wall Street quotes.

The Wolf of Wall Street was based on Jordan Belfort‘s book of the same title, and what made it so loved and popular was the fact that it delved into actual life events. The book and the film depict Belfort’s rapid rise to success while he led a life of drugs, sex, and scheming.

This collection delves into topics about money, success, and business. Check out some of the most memorable quotes from The Wolf of Wall Street that we can all relate to through this list!

And make sure to check out these Leonardo DiCaprio quotes and Titanic quotes.

Best Quotes From The Wolf of Wall Street

1. “Without action, the best intentions in the world are nothing more than that—intentions.” – Jordan Belfort

2. “You wanna know what money sounds like? Go to a trading floor on Wall Street.” – Jordan Belfort

4. “Still, give them to me young, hungry, and stupid. And in no time, I will make them rich.” – Jordan Belfort

5. “The only thing standing between you and your goal is the b*llsh*t story you keep telling yourself as to why you can’t achieve it.” – Jordan Belfort

6. “Let me tell you something. There’s no nobility in poverty. I’ve been a rich man and I’ve been a poor man. And I choose rich every f*ck*ng time.” – Jordan Belfort

7. “This right here is the land of opportunity. This is America. This is my home! The show goes on! They’re gonna need to send in the National Guard to take me out, ‘cause I ain’t going nowhere!” – Jordan Belfort

8. “I want you to deal with your problems by becoming rich!” – Jordan Belfort

10. “When you live your life by poor standards, you inflict damage on everyone who crosses your path, especially those you love.” – Jordan Belfort

15. “Fall in love with the person who enjoys your madness, not an idiot who forces you to be normal.” – Jordan Belfort

The Wolf of Wall Street Quotes on Success and Business

16. “The name of the game, moving the money from the client’s pocket to your pocket.” – Mark Hanna

17. “Always keep the client on the Ferris wheel.” – Mark Hanna

18. “I don’t think you’re cut out for this job. You look like a kid, and Wall Street’s no place for kids. It’s a place for killers. A place for mercenaries. So, in that sense you’re lucky I’m not the one who does the hiring around here.” – Jordan Belfort

19. “Nobody knows if a stock’s going up, down or f*ck*ng sideways, least of all stockbrokers. But we have to pretend we know.” – Mark Hanna

20. “Ninety-seven percent of the people who quit too soon are employed by the three percent who didn’t.” – Jordan Belfort

The Wolf of Wall Street Quotes That Are Full of Sarcasm

22. “There were certain things that you just didn’t joke about; it was simply bad luck. It was like pissing in the fate god’s eye. If you did it long enough, he was certain to piss right back at you. And his urine stream was like a f*ck*ng fire hose.” – Jordan Belfort

23. “Yeah, like Buddhists. They don’t give a sh*t about money. They’re wrapped in sheets. They’re not buying sh*t.” – Alden Kupferberg

25. “I’ll tell you what, I’m never eating at Benihana again. I don’t care whose birthday it is.” – Donnie Azoff

26. “If anyone here thinks I’m superficial or materialistic, go get a job at f*ck*ng Mcdonald’s, ‘cause that’s where you f*ck*ng belong!” – Jordan Belfort

27. “You be ferocious, you be relentless, you be telephone f*ck*ng terrorists.” – Jordan Belfort

28. “I can’t imagine ever not enjoying getting f*ck*d up. How’s being sober?” – Donnie Azoff

30. “My warriors, who won’t take a no for an answer, who won’t hang up the phone till their client either buys—or f*ck*ng dies.” – Jordan Belfort

31. “It was obscene in the real world. But, who the f*ck wanted to live there?” – Jordan Belfort

32. “For your information boys, Danielle has promised to use this $10,000 for breast implants. She’s already got C-cups, but now she wants f*ck*n’ double d’s!” – Jordan Belfort

34. “I couldn’t believe how these guys talked to each other! I was hooked in seconds. It was like mainlining adrenaline.” – Jordan Belfort

35. “So, if you’ve got a client who bought stock at 8 and now it’s at 16 and he’s all f*ck*ng happy, he wants to cash in and liquidate, take his f*ck*ng money and run home, you don’t let him do that—’cause that would make it real.” – Mark Hanna

37. “The real question is this: was all this legal? Absolutely f*ck*ng not. But we were making more money than we knew what to do with.” – Jordan Belfort

40. “Just like that I made two grand, the other guys looked at me like I just discovered fire.” – Jordan Belfort

42. “It was as if I was bulletproof or something. How many times had I cheated death?” – Jordan Belfort

43. “I’m not ashamed to admit it: my first time in prison, I was terrified. For a moment, I had forgotten I lived in a world where everything was for sale.” – Jordan Belfort

44. “After all, it was the nature of 20th-century capitalism that everyone should scam everyone, and he who scammed the most ultimately won the game. On that basis, I was the undefeated world champ.” – Jordan Belfort

45. “My name is Jordan Belfort. The year I turned 26, I made 49 million dollars, which really pissed me off because it was 3 shy of a million a week.” – Jordan Belfort

46. “Money is the oxygen of capitalism and I wanna breathe more than any man alive.” – Jordan Belfort

47. “There are two keys to success in the broker business—first of all you gotta stay relaxed, secondly you gotta always get stay high.” – Mark Hanna

48. “Get us two Absolut martinis. You know how I like ‘em, straight up. In seven-and-a-half minutes, you will bring us two more, then two more every five minutes after that, until one of us passes the f*ck out.” – Mark Hanna

50. “All right, pump those numbers up, those are rookie numbers in this racket. I myself, I jerk off at least—twice a day.” – Mark Hanna

51. “On a daily basis, I consume enough drugs to sedate Manhattan, Long Island, and Queens for a month.” – Jordan Belfort

52. “With this script, I’ll teach each and every one of you to be the best.” – Jordan Belfort

56. “There is no such thing as bad publicity. Your hair looks good.” – Teresa Petrillo

58. “You got my money taped to your t*ts, honey. Technically, you do work for me.” – Donnie Azoff

61. “The nice thing about being rescued by Italians is that they feed you, make you drink red wine, then you get to dance.” – Jordan Belfort

62. “I felt horrible. Three days later, I filed for a divorce and moved Naomi into the apartment.” – Jordan Belfort

63. “There was this one time I was selling pot to this Amish dude. You know those guys who got like the beard with, like, no mustache or some b*llsh*t? Well, he says that he only wants to make furniture.” – Alden Kupferberg

65. “Yeah, it’s getting old and decrepit. It’s startin’ to sh*t in the house again.” – Jordan Belfort

69. “And you know what else, Daddy? Mommy is just sick and tired of wearing panties.” – Naomi Lapaglia

71. “But if you can make your clients money at the same time it’s advantageous to everyone, correct?” – Jordan Belfort

74. “If I’m not mistaking, you just tried to bribe a federal officer.” – Patrick Denham

76. “Mr. Hanna, you’re able to do drugs during the day and then still function, still do your job?” – Jordan Belfort

78. “When you do something, you might fail. But that’s not because you’re a failure. It’s because you have not learned enough. Do it differently each time. One day, you will do it right. Failure is your friend.” – Jordan Belfort, Author

79. “Successful people are 100% convinced that they are masters of their own destiny, they’re not creatures of circumstance, they create circumstance, if the circumstances around them suck they change them.” – Jordan Belfort, Author

80. “When the window of opportunity open, that’s when you work twice as hard.” – Jordan Belfort, Author

81. “I believe in total immersion, if you want to be rich, you have to program your mind to be rich.” – Jordan Belfort, Author

82. “Best way to sell something: don’t sell anything. Earn awareness, respect, and trust of those who might buy.” – Jordan Belfort, Author

85. “You have to unlearn all the thoughts that were making you poor and replace them with new thoughts—rich thoughts.” – Jordan Belfort, Author

86. “People don’t buy stock; it gets sold to them. Don’t ever forget that.” – Jordan Belfort, Author

88. “The easiest way to make money is to create something of such value that everybody wants and go out and give and create value, the money comes automatically.” – Jordan Belfort, Author

89. “If you give people a good enough ‘why’, they will always figure out the ‘how.’” – Jordan Belfort, Author

More The Wolf of Wall Street Quotes From the Book

92. “When it’s all said and done, it’s the energy we send out into the universe that often comes back to us. That’s a universal law, love.” – Jordan Belfort, Author

94. “Perhaps I should have run the other way right then and there, realizing that a guy like this might bring out the worst in me.” – Jordan Belfort, Author

95. “After all, guilt and remorse were worthless emotions, weren’t they? Well, I knew they weren’t; but I had no time for them. Forward motion—that was the key. Run as fast as you can and don’t look back.” – Jordan Belfort, Author

96. “Money is the tool, my child, not the mason; it can help you make acquaintances but not true friends; and it might buy you a life of leisure but not a life of peace.” – Jordan Belfort, Author

97. “Look at them; as much money as they make, every last one of them is broke! They spend every dime they have, trying to keep up with my lifestyle. But they can’t, because they don’t make enough.” – Jordan Belfort, Author

98. “You see, money doesn’t just buy you a better life, better food, better cars, better women, it makes you actually a better person. You can give generously to your church or political party of your choice.” – Jordan Belfort, Author

100. “Every human being, after all, is possessed with the undeniable urge to confess his sins. Religions were built on such things. And kingdoms were conquered with the promise that all sins would be forgiven afterward.” – Jordan Belfort, Author

When You Hear the Phrase, “Too Much of Anything Is Bad,” What Comes to Your Mind?

The film, The Wolf of Wall Street, was a box office success. In fact, many people praised both the film and its main character, Jordan Belfort. One of the most bizarre aspects of this film is that the story is true.

It tells the story of Jordan Belfort, a stockbroker in New York City, and his firm’s involvement in rampant corruption and fraud on Wall Street, which led to his downfall. Excess, greed, and glory triumphed over genuine customer service.

Jordan Belfort’s story reminds us that we should avoid doing too much of anything. We should always take the middle path. After all, everything in moderation is the safest path to take in life.

Did you feel motivated after reading our collection? Which of these quotes are your favorites? Please, leave a comment below.