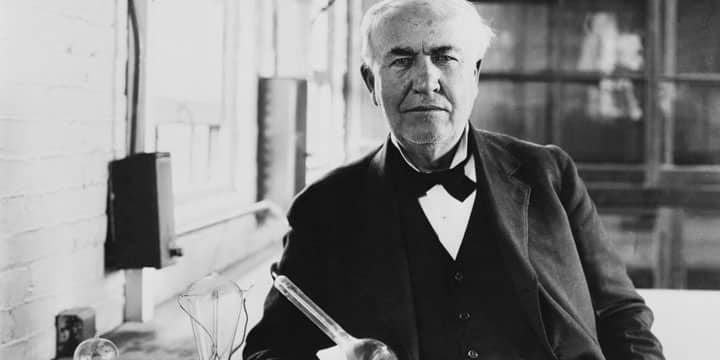 1. “There is no substitute for hard work.”

3. “Everything comes to him who hustles while he waits.”

4. “Our greatest weakness lies in giving up. The most certain way to succeed is always to try just one more time.”

5. “The trouble with most people is that they quit before they start.”

6. “Success is the product of the severest kind of mental and physical application.”

7. “Failure is really a matter of conceit. People don’t work hard because, in their conceit, they imagine they’ll succeed without ever making an effort. Most people believe that they’ll wake up some day and find themselves rich. Actually, they’ve got it half right, because eventually they do wake up.”

8. “Sleep is like a drug. Take too much at a time and it makes you dopey. You lose time and opportunities.”

9. “Work while others are wishing.”

10. “Personally, I enjoy working about 18 hours a day. Besides the short catnaps I take each day, I average about four to five hours of sleep per night.”

13. “Accomplishing something provides the only real satisfaction in life.”

14. “A genius is a talented person who does his homework.”

15. “I would rather have one man with enthusiasm working with me than ten who are complacent.”

17. “Most of the exercise I get is from standing and walking around laboratory tables all day. I derive more benefit and entertainment from this than some of my friends and competitors get from playing games like golf.”

18. “My principal business is giving commercial value to the brilliant – but misdirected – ideas of others.”

20. “The man who doesn’t make up his mind to cultivate the habit of thinking misses the greatest pleasure in life.”

22. “Large portions of life’s disappointments are individuals who did not understand that they were so near achievement when they surrendered.”

24. “I owe my success to the fact that I never had a clock in my workroom.”

25. “Never be discouraged, because every wrong turn attempt, when left behind you, is another step forward taking you closer to your goals.”

27. “Negative results are just what I want. They’re just as valuable to me as positive results. I can never find the thing that does the job best until I find the ones that don’t.”

28. “Success is based on imagination plus ambition and the will to work.”

29. “I never view mistakes as failures. They are simply opportunities to find out what doesn’t work.”

31. “Good fortune is what happens when opportunity meets with planning.”

32. “An idea is something that won’t work unless you do.”

34. “The first 40 hours of work per week are for survival. Everything after that is for success.”

35. “Success depends on how many experiments you can fit into 24 hours.”

36. “Most of my ideas belonged to other people who never bothered to develop them.”

37. “I make more mistakes than anyone else I know, and sooner or later, I patent most of them.”

40. “The successful person makes a habit of doing what the failing person doesn’t like to do.”

41. “The greatest invention in the world is the mind of a child.”

42. “My success is due more to my ability to work continuously on one thing without stopping than to any other single quality.”

43. “Before you reject an idea, find at least five good things about it.”

44. “Nothing that’s good works by itself, you’ve got to make the damn thing work.”

45. “People are not remembered by how few times they fail, but by how often they succeed. Every wrong step is another step forward.”

46. “Having a vision for what you want is not enough. Vision without execution is hallucination.”

47. “Genius is one percent inspiration and ninety-nine percent perspiration.”

48. “During all those years of experimentation and research, I never once made a discovery. All my work was deductive, and the results I achieved were those of invention, pure and simple. I would construct a theory and work on its lines until I found it was untenable. Then it would be discarded at once and another theory evolved. This was the only possible way for me to work out the problem.”

49. “When you have exhausted all possibilities, remember this: you haven’t.”

50. “Every failure is a lesson learned about your strategy.”

51. “A good intention, with a bad approach, often leads to a poor result.”

52. “A good idea is never lost. Even though its originator or possessor may die, it will someday be reborn in the mind of another.”

54. “If we did all the things we are capable of, we would literally astound ourselves.”

56. “I never did anything by accident, nor did any of my inventions come by accident; they came by work.”

57. “Nearly every man who develops an idea works it up to the point where it looks impossible, and then he gets discouraged. That’s not the place to become discouraged.”

58. “The secret of success is focus of purpose.”

59. “Results! Why, man, I have gotten a lot of results. I know several thousand things that won’t work.”

60. “Anything that won’t sell, I don’t want to invent. Its sale is proof of utility, and utility is success.”

61. “I find my greatest pleasure, and so my reward, in the work that precedes what the world calls success.”

64. “There is far more opportunity than there is ability.”

65. “What a man’s mind can create, man’s character can control.”

67. “Many of life’s failures are people who did not realize how close they were to success when they gave up.”

68. “Show me a thoroughly satisfied man and I will show you a failure.”

69. “Opportunity is missed by most people because it is dressed in overalls and looks like work.”

70. “Be courageous. I have seen many depressions in business. Always America has emerged from these stronger and more prosperous. Be brave as your fathers before you. Have faith! Go forward!”

71. “To invent, you need a good imagination and a pile of junk.”

72. “The chief function of the body is to carry the brain around.”

73. “Being busy does not always mean real work. The object of all work is production or accomplishment and to either of these ends there must be forethought, system, planning, intelligence, and honest purpose, as well as perspiration. Seeming to do is not doing.”

74. “Just because something doesn’t do what you planned it to do doesn’t mean it’s useless.”

75. “My mother was the making of me. She was so true and so sure of me, I felt that I had someone to live for – someone I must not disappoint. The memory of my mother will always be a blessing to me.”

77. “The three great essentials to achieve anything worth while are: hard work, stick-to-itiveness, and common sense.”

80. “Hell, there are no rules here – we’re trying to accomplish something.”

81. “Discontent is the first necessity of progress.”

83. “I know this world is ruled by infinite intelligence. Everything that surrounds us- everything that exists – proves that there are infinite laws behind it. There can be no denying this fact. It is mathematical in its precision.”

84. “Great ideas originate in the muscles.”

85. “Show me a completely contented person and I’ll show you a failure.”

86. “I have friends in overalls whose friendship I would not swap for the favor of the kings of the world.”

87. “Maturity is often more absurd than youth and very frequently is most unjust to youth.”

88. “I am much less interested in what is called God’s word than in God’s deeds. All bibles are man-made.”

89. “We don’t know a millionth of one percent about anything.”

90. “When I have fully decided that a result is worth getting I go ahead of it and make trial after trial until it comes.”

91. “To my mind the old masters are not art; their value is in their scarcity.”

92. “The roots of tobacco plants must go clear through to hell. Satan’s principal agent Dyspepsia must have charge of this branch of the vegetable kingdom.”

93. “The body is a community made up of its innumerable cells or inhabitants.”

94. “Waste is worse than loss. The time is coming when every person who lays claim to ability will keep the question of waste before him constantly. The scope of thrift is limitless.”

96. “Absorb ideas from every source.”

97. “Because ideas have to be original only with regard to their adaptation to the problem at hand, I am always extremely interested in how others have used used them.”

98. “Be brave as your fathers before you. Have faith and go forward.”

100. “The first requisite for success is to develop the ability to focus and apply your mental and physical energies to the problem at hand – without growing weary. Because such thinking is often difficult, there seems to be no limit to which some people will go to avoid the effort and labor that is associated with it.”