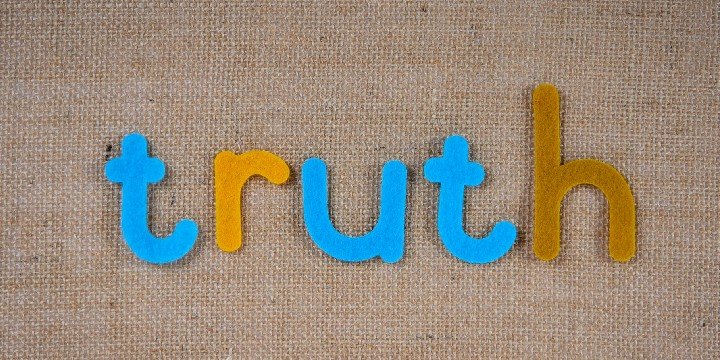 These truth quotes will give you all the reasons why speaking only what’s true and factual will help you find freedom and peace in life.

The truth can be cruel at times, and it can break you. In fact, many people fear the truth because they prefer to live in lies that give them pleasure rather than reality.

We lie because we don’t want to hurt other people’s or our own feelings. The truth can be overwhelming at times, but it should not prevent you from living a happy and righteous life.

We’ve compiled this collection of truth quotes to inspire you to speak up and live life truthfully!

And don’t forget to check out these honesty quotes and communication quotes.

1. “If you tell the truth, you don’t have to remember anything.” – Mark Twain

3. “Even if you are a minority of one, the truth is the truth.” – Mahatma Gandhi

4. “Truth hurts but what hurts makes you stronger.” – Maxime Lagacé

5. “Rather than love, than money, than fame, give me truth.” – Henry David Thoreau

6. “Never tell the truth to people who are not worthy of it.” – Mark Twain

7. “Too many prefer gentle lies to hard truths.” – Shane Parrish

8. “In the long run, the most unpleasant truth is a safer companion than a pleasant falsehood.” – Theodore Roosevelt

9. “The truth is rarely pure and never simple.” – Oscar Wilde

10. “Truth will always be truth, regardless of lack of understanding, disbelief, or ignorance.” – W. Clement Stone

11. “The truth is always daunting but always worth knowing.” – Thomas Winning

13. “For every good reason there is to lie, there is a better reason, to tell the truth.” – Bo Bennett

15. “Step into your authentic truth, because your truth will light up the world.” – Gabby Bernstein

Truth Quotes That’ll Inspire You to Speak Up

17. “One voice speaking truth is a greater force than fleets and armies.” – Ursula K. Le Guin

18. “Proclaim the truth and do not be silent through fear.” – Catherine of Siena

19. “Always tell the truth. Then you don’t have to worry about what you said last.” – Robert Cook

21. “The truth. It is a beautiful and terrible thing, and should therefore be treated with great caution.” – J. K. Rowling

22. “A lie can travel halfway around the world while the truth is putting on its shoes.” – Mark Twain

24. “Truth, like gold, is to be obtained not by its growth, but by washing away from it all that is not gold.” – Leo Tolstoy

25. “Truth will ultimately prevail where there are pains to bring it to light.” – George Washington

27. “The truth is like a lion; you don’t have to defend it. Let it loose; it will defend itself.” – Augustine of Hippo

Meaningful Truth Quotes That Will Set You Free

28. “The truth will set you free, but first it will make you miserable.” – James A. Garfield

29. “The man who speaks the truth is always at ease.” – Jeremiah Say

30. “Some people think that the truth can be hidden with a little cover-up and decoration. But as time goes by, what is true is revealed, and what is fake fades away.” – Ismail Haniyeh

31. “Three things cannot be long hidden: the sun, the moon, and the truth.” – Buddha

33. “In order to be effective, truth must penetrate like an arrow and that is likely to hurt.” – Wei Wu Wei

34. “Once you eliminate the impossible, whatever remains, no matter how improbable, must be the truth.” – Arthur Conan Doyle

Truth Quotes for Everyone Who Needs a Reason to Be Truthful

36. “Half a truth is often a great lie.” – Benjamin Franklin

37. “A harmful truth is better than a useful lie.” – Thomas Mann

39. “A truth that’s told with bad intent, beats all the lies you can invent.” – William Blake

40. “Yes, the truth may hurt but lies will become a crutch and will cripple you.” – Stephen T. Scott

41. “It is always the best policy to speak the truth, unless, of course, you are an exceptionally good liar.” – Jerome K. Jerome

42. “There’s an old saying that if a lie is told often enough, it becomes the truth. Actually, it doesn’t. What happens is that people simply start believing that it’s true.” – Bailey Jackson

43. “There are few reasons for telling the truth, but for lying the number is infinite.” – Carlos Ruiz Zafón

44. “The truth may be out there, but the lies are inside your head.” – Terry Pratchett

45. “I just tell the truth, and telling the truth is crazy in a world full of lies.” – Kanye West

47. “Tell the truth, or someone will tell it for you.” – Stephanie Klein

48. “Truth: something hard to say and hard to hide.” – Paulo Coelho

49. “Man is least himself when he talks in his own person. Give him a mask, and he will tell you the truth.” – Oscar Wilde

50. “In a time of universal deceit—telling the truth is a revolutionary act.” – George Orwell

52. “Telling a truth is not only a matter of character but is also a matter of appreciating factual situations and representing them without bias.” – M. K. Soni

53. “Nothing in this world is harder than speaking the truth, nothing easier than flattery.” – Fyodor Dostoevsky

55. “All truth passes through three stages. First, it is ridiculed. Second, it is violently opposed. Third, it is accepted as being self-evident.” – Arthur Schopenhauer

Truth Quotes to Give You Peace of Mind

58. “The first reaction to truth is hatred.” – Tertullian

60. “Whatever satisfies the soul is truth.” – Walt Whitman

62. “Truth is so rare that it is delightful to tell it.” – Emily Dickinson

63. “Facts are many, but the truth is one.” – Rabindranath Tagore

64. “Befriend the truth and make it your ally in all things.” – Marcus Aurelius

Funny Truth Quotes That Will Make You Laugh

65. “If you want to tell people the truth, make them laugh, otherwise they’ll kill you.” – Oscar Wilde

66. “The great advantage about telling the truth is that nobody ever believes it.” – Dorothy L. Sayers

67. “The truth is a bully we all pretend to like.” – Gregory David Roberts

68. “When you stretch the truth, watch out for the snapback.” – Bill Copeland

69. “A lie gets halfway around the world before the truth has a chance to get its pants on.” – Winston Churchill

70. “Sometimes people ask you a question with their eyes begging you to not tell them the truth.” – Nassim Nicholas Taleb

When Was the Last Time You Were Torn Between Telling the Truth or a Lie?

Telling the truth can be difficult, especially if it will cause pain to someone you care about. However, telling lies will hurt them even more once they discover the truth from other people. Being truthful may be hard, but it will be worthwhile once the problem is resolved.

We all have problems that we must deal with, and some people use lies to avoid dealing with them. For some, it’s better to believe lies more than the truth to save a relationship or avoid conflicts. But, remember that lies and deception will always bring you more harm than good.

As you grow up and experience many different things in life, you’ll fully understand why people tell you that the truth will set you free. We hope these quotes were able to shed light on the importance of being truthful and genuine to yourself and everyone around you.

Which of these truth quotes gave you peace of mind? Are there any quotes that moved you to be more truthful? Please, comment down below.