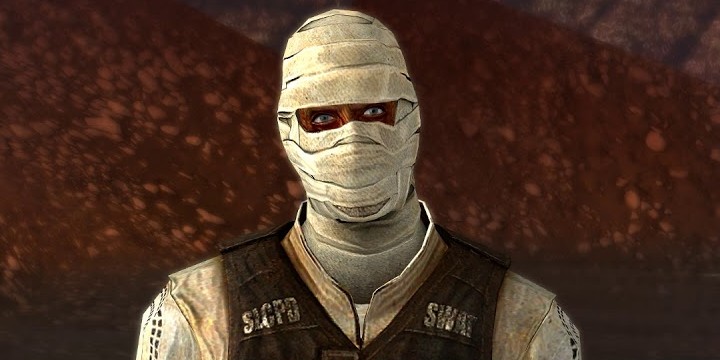 Here are the top Joshua Graham quotes that will keep the burning passion in your hearts alive!

Joshua Sawyer created Joshua Graham from the story of the parable of the Lost Son.

He was then featured in “Fall Out: New Vegas” and “Fall Out: Wasteland Warfare” as a non-player character to make the game more challenging.

His excellence in tribe languages and weapon handling succeeded him as the first war leader of the Legion.

Graham’s survival in the burns of war made him an iconic and feared character as a co-founder of Caesar’s army.

Check out what our favorite character has to say by reading the entire collection below.

And don’t forget to check out thees Fallout quotes.

1. “It never stops burning. My skin. Every day, I have to unwind the bandages and replace them with fresh ones.”

2. “I have been baptized twice, once in water, once in flame. I will carry the fire of the holy spirit inside until I stand before my Lord for judgment.”

3. “I don’t enjoy killing, but when done righteously, it’s just a chore, like any other.”

4. “I survived because the fire inside burned brighter than the fire around me. I fell down into that dark chasm, but the flame burned on and on.”

5. “Any society that derives its power and authority from the will of man alone lives apart from God and will crumble in the end.”

7. “I want to have my revenge. Against him. Against Caesar. I want to call it my own, to make my anger God’s anger. To justify the things I’ve done.”

8. “Caesar would never admit this openly, but he knows I’m alive. I’ve killed enough of his frumentarii and assassins that have come looking.”

9. “Lastly, waging war against good people is bad for the soul. This may not seem important to you now, but it’s the most important thing I’ve said.”

10. “We have made and kept covenants with our Lord, God, to honor his laws. In exchange, we are promised eternal salvation after this life.”

13. “For many of us, the road is a difficult one, but the path is always there for us to follow, no matter how many times we may fall.”

14. “Living in willful ignorance is an ugly thing, but God often speaks loudest in the wild places of his creation, like Zion.”

17. “Every day. Some days are harder than others.”

18. “In a world filled with misery and uncertainty, it is a great comfort to know that, in the end, there is light in the darkness.”

19. “You’re a good neighbor to us. We all go through periods of darkness. In such times, we can turn to the Lord, but it’s good to have friends.”

20. “When the walls come tumbling down, when you lose everything you have, you always have family.”

21. “Leading in battle became training, punishing, terrorizing. A series of small mistakes before a great fall. And I stayed in that darkness until after Hoover Dam.”

22. “I am the right hand of the Lord and the instrument of his vengeance.”

23. “I know Daniel doesn’t approve, but destroying the White Legs is the only way to ensure the Sorrows can remain in Zion.”

24. “In the best of all possible worlds, they would just leave us in peace. But they won’t.”

25. “We warned you at Syracuse, and you persisted. You took advantage of us at New Canaan to drive us out, and like the dogs of Caesar you are, you followed us to Zion. And now you stand on holy ground, a temple to God’s glory on Earth. But the only use for an animal in our temple is sacrifice!”

26. “Show no quarter to the White Legs we come across. Make no mistake about why we are here. This is an extermination.”

27. “I want to take from him what they took from me, from my family. In this life. I want them to suffer. I want all of them to die in fear and pain.”

28. “Sometimes, I tell myself that these wildfires never stop burning. But I’m the one who starts them. Not God. Not them.”

29. “When our Lord entered the temple and found it polluted by money-changers and beasts, did he ask them to leave? Did he cry? Did he simply walk away? No. He drove them out.”

30. “Love the sinner, hate the sin. With Caesar, it’s often very difficult to see through all of that sin to the person inside.”

31. “By the rivers of Babylon, there we sat down, yea, we wept, when we remembered Zion. Remember, O Lord, The Children of Edom in the day of Jerusalem who said, ‘Raze it, raze it, even to the foundation.’ O daughter of Babylon, who art to be destroyed. How happy shall he be that rewardeth thee as thou hast served us. Happy shall he be, that taketh and dasheth thy little ones against the stones.”

32. “Happy are those who do the work of the Lord. Zion belongs to God and the people of God. It is a natural temple and monument to his glory.”

33. “It is one thing to forgive a slap across my cheek, but an insult to the Lord requires—no—it demands correction.”

34. “I pray for the safety of all good people who come to Zion—even gentiles. But we can’t expect God to do all the work.”

35. “They’re still God’s children, but if they turn against their brothers and sisters, won’t listen to reason. If they pollute the Lord’s temples on Earth, like Zion, who are we to stand by and let them continue?”

Joshua Graham Quotes for All the Gamers Worldwide

36. “I don’t know if you were close to the other members of your group, but you have my sympathy.”

38. “We have more than enough food and medicine to offer. Good news is our most valuable commodity.”

40. “Zion is a place, and a state of being, that has been lost to us several times in the past.”

41. “Nothing isn’t better or worse than anything. Nothing is just nothing.”

42. “I have found it difficult at times to forgive myself for what happened. But a significant part of the answer involves forgiveness—something I never truly understood.”

43. “What’s so bad about the darkness though? It’s peaceful.”

44. “Unless you’re not religious, then the end is simply the end. That’s comforting as well.”

45. “That’s the light to me—an end to all suffering and responsibility. The light is non-existence.”

46. “You and I couldn’t even begin to comprehend what life was like before the great war, courier. There are many mysteries lost to time, and one day you and I will follow. Forgotten by in the shadows of the past.”

47. “War crimes? I never took you for one with such a lack of understanding of the world, the war ended centuries ago. How can I commit war crimes if the war is over?”

48. “He didn’t like whining women, but he really, really hated whining men.”

49. “They were businessmen who were worse than any of the Bloods or Crips I ever met—and believe me, I met more than a few of them in my life.”

50. “Euthanizing his faith years ago, he just didn’t realize.”

Which of these Joshua Graham Quotes Inspired You to Be Strong?

Joshua Graham was shaped by Sallow to become a monster. However, his upbringing did not wholly lose the goodness in him. His efforts to become a better person are telling of his nature.

Most people might not have appreciated his character, but it unfolds many issues in how society thinks. We quickly assume that a person doing bad things is immediately an evil person and never understood how good people can make mistakes.

It takes a lot of strength to prove everyone wrong if they all think the same. Joshua Graham inspires us to continue fighting our battles for our faith and loved ones despite these obstacles.

Do you have more Joshua Graham quotes to add? What lessons did you learn from this collection? We’d love to hear from you in the comment section below!