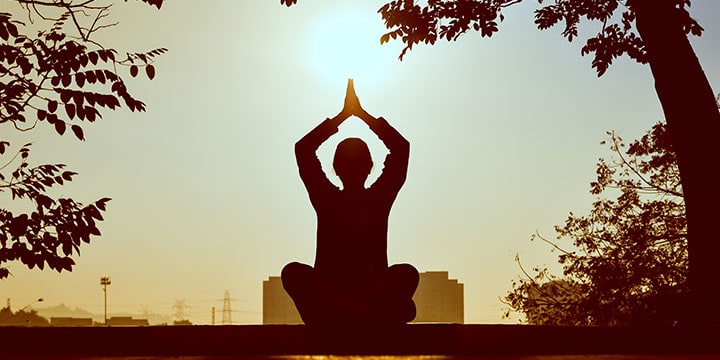 These karma quotes will inspire you to release good energy into the world and remember the control you have over your future.

The concept of karma first originated in Rigveda, the oldest Hindu text to exist. In Sanskrit, it literally means action, deed, act.

Later on, it developed as the belief in the consequences of your actions, no matter if it is good or bad.

Although karma is only a core concept of Buddhism and Hinduism, it is a belief that is widely known across different cultures and religions.

With the rise of its believers, people learn about the effects that positivity and kindness toward the world can bring.

So, if you want to adapt the lessons that karma teaches humanity, then this list will fit the bill perfectly. Keep reading below to help you reflect on your actions in life.

And don’t forget to check out these happiness quotes and positive quotes.

1. “Karma moves in two directions. If we act virtuously, the seed we plant will result in happiness. If we act non-virtuously, suffering results.” – Sakyong Mipham

2. “Karma is like a rubber band. You can only stretch it so far before it comes back and smacks you in the face.” – Anonymous

3. “People pay for what they do, and still more, for what they have allowed themselves to become. And they pay for it simply by the lives they lead.” – James Baldwin

4. “There’s a natural law of Karma that vindictive people, who go out of their way to hurt others, will end up broke and alone.” – Sylvester Stallone

5. “When you truly understand karma, then you realize you are responsible for everything in your life.” – Keanu Reeves

6. “If you give a good thing to the world, then over time, your karma will be good, and you’ll receive good.” – Russell Simmons

7. “Karma brings us ever back to rebirth, binds us to the wheel of births and deaths. Good karma drags us back as relentlessly as bad, and the chain which is wrought out of our virtues holds as firmly and as closely as that forged from our vices.” – Annie Besant

8. “Before you act, you have freedom, but after you act, the effect of that action will follow you whether you want it to or not. That is the law of Karma.” – Paramahansa Yogananda

9. “Your believing or not believing in karma has no effect on its existence, nor on its consequences to you. Just as a refusal to believe in the ocean would not prevent you from drowning.” – F. Paul Wilson

10. “Karma comes after everyone eventually. You can’t get away with screwing people over your whole life. I don’t care who you are. What goes around comes around. That’s how it works. Sooner or later, the universe will serve you the revenge that you deserve.” – Jessica Brody

11. “Karma means both action and memory. There is no memory without action and no action without memory.” – Sadhguru

Karma Quotes That’ll Encourage You to Be Good

13. “I believe in karma. If the good is sown, the good is collected. When positive things are made, that returns well.” – Yannick Noah

14. “Karma is justice. It does not reward or punish because we have to earn all that we receive.” – Mary T. Browne

15. “I believe in karma, and I believe if you put out positive vibes to everybody, that’s all you’re going to get back.” – Kesha

16. “Still, others commit all sorts of evil deeds, claiming karma doesn’t exist. They erroneously maintain that since everything is empty, committing evil isn’t wrong. Such persons fall into a hell of endless darkness with no hope of release. Those who are wise hold no such conception.” – Bodhidharma

17. “Of all kinds of karma, using occult forces for one’s own benefit or to the harm of others has the worst consequences for oneself.” – Sadhguru

18. “Treat other people’s home as you want them to respect yours because what goes around, comes around.” – Ana Monnar

19. “If your actions were to boomerang back on you instantly, would you still act the same?” – Alexandra Katehakis

20. “In the long run, every man will pay the penalty for his own misdeeds. The man who remembers this will be angry with no one, indignant with no one, revile no one, blame no one, offend no one, hate no one.” – Epictetus

22. “Karma means you are the maker of your life.” – Sadhguru

24. “How people treat you is their karma. How you react is yours.” – Wayne Dyer

26. “Karma has no menu. You get served what you deserve.” – Anonymous

Karma Quotes That Are Packed With Wisdom

28. “Not only is there often a right and wrong, but what goes around does come around. Karma exists.” – Donald Van de Mark

29. “Stop blaming others for the pains and sufferings you have. They are because of you, your karma, and your own disposition.” – Girdhar Joshi

30. “Even chance meetings are the result of karma. Things in life are fated by our previous lives. That even in the smallest events, there’s no such thing as coincidence.” – Haruki Murakami

31. “What you hate, you re-create, and what you bless, you put to rest.” – Eric Micha’el Leventhal

32. “Karma functions through certain tendencies. But with some awareness and focus, you can push it in a different direction.” – Sadhguru

33. “As long as karma exists, the world changes. There will always be karma to be taken care of.” – Nina Hagen

34. “Karma is your survival and your bondage. And if you handle it right, it can also be your liberation.” – Sadhguru

Great Karma Quotes to Empower Yourself

35. “This is your karma. You do not understand now, but you will understand later.” – H. Raven Rose

36. “You have to be careful when involving yourself with someone else’s karma.” – Brownell Landrum

38. “Karma bides its time. You will always have to watch out. Karma is unforgiving and always gets payback.” – Benjamin Bayani

39. “When your perception is tinted by memory, it is karma. Your memory is the basis of your prejudice.” – Sadhguru

Karma Quotes to Understand the Link Between Actions and Consequences

40. “The meaning of Karma is in the intention. The intention behind action is what matters.” – Bhagavad Gita

41. “You cannot do harm to someone because someone has done harm to you. You will pay just like they will.” – Ericka Williams

42. “The universe does not carry debts. It always returns back to you what you gave it.” – Drishti Bablani

44. “Every moment of your life, you perform an action—physically, mentally, emotionally, and energy-wise. Each action creates a certain memory. That is karma.” – Sadhguru

45. “Karma, simply put, is an action for an action, good or bad.” – Stephen Richards

46. “Contrary to popular misconception, karma has nothing to do with punishment and reward. It exists as part of our holographic universe’s binary or dualistic operating system only to teach us responsibility for our creations, and all things we experience are our creations.” – Sol Luckman

48. “Violence does, in truth, recoil upon the violent, and the schemer falls into the pit which he digs for another.” – Arthur Conan Doyle

49. “Nothing is accidental here. The whole physical existence is happening between cause and consequence.” – Sadhguru

50. “The law is simple. Every experience is repeated or suffered till you experience it properly and fully the first time.” – Ben Okri

Did These Karma Quotes Inspire You Live Life Morally?

Most people don’t think much about the general consequences of how they act. We get so overwhelmed with the things around us that we just go through life without being mindful of our effect on the world. Thus, we often forget the weight that our every action brings to someone or something.

Through karma, we are reminded of the importance of being mindful. It teaches us the importance of thinking and assessing every situation before deciding to execute an action. Moreover, even if you made the wrong judgment, the pure intention you have is enough to help you become a good person.

Life is tough, and everybody knows how difficult it can be to be kind all the time. So, practice compassion through these quotes and get in touch with your good side. Consider revisiting this list whenever you need some guidance on living life morally.

Which karma quote is your favorite? What is your biggest takeaway from this quote collection? Comment below!