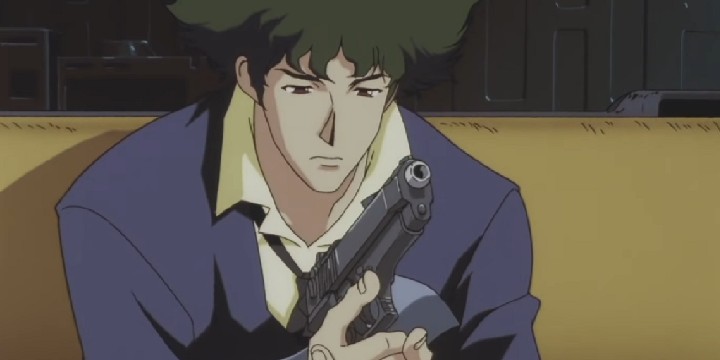 We’ve gathered these Spike Spiegel quotes to inspire you to adopt a worry-free attitude for a more peaceful life.

Spike Spiegel is one of the main characters of the 1998 Japanese animated series, Cowboy Bebop. He was a former criminal who became a bounty hunter after falling in love.

Despite the dangers and possibilities of death that come with his missions, Spike handles these kinds of situations calmly. His stoic philosophy allows him to go through the worst experiences and still think clearly in the present.

Indeed, Spike Spiegel is an admirable and inspirational person that everyone can learn from. So, make sure you don’t miss out on his deep and philosophical words in our collection below!

And check out these Cowboy Bebop quotes and anime quotes.

1. “Life will challenge you to do things sometimes. You just have to let go!”

2. “We are all in the perpetual quest for keeping oneself occupied, entertained, and important—which burns at the edge of addiction.”

4. “Water can take any form. It drifts without effort one moment, then pounds down in a torrent the very next.”

6. “I felt like I was watching a dream I could never wake up from. Before I knew it, the dream was over.”

7. “Look at my eyes, Faye. One of them is a fake because I lost it in an accident. Since then, I’ve been seeing the past in one eye and the present in the other. So, I thought I could only see patches of reality, never the whole picture.”

8. “I was younger then, I wasn’t afraid of anything, I didn’t think about dying for a second. I thought I was invincible. Then I met some girl. I wanted to live. I started to think like that. For the first time, I was afraid of death. I had never felt like that before.”

9. “Why do people stay longer in my head than they do in my life?”

10. “A fallen angel banished from heaven arises into the light to be received by the benevolence of God.”

Spike Spiegel Quotes to Learn About His Philosophy in Life

11. “Once, there was a tiger-striped cat. This cat died a million deaths, revived, and lived a million lives. And he had various owners that he didn’t really care about. The cat wasn’t afraid to die. Then one day, he met a white female cat, the two of them fell in love and lived together happily. Well, the years went by, and the white female cat got old and passed away. The tiger-striped cat cried a million times, then he also died. But this time, he didn’t come back.”

12. “Do you see now? It means becoming like clear water.”

13. “The music box is broken, or is it? It starts to play, and a haunting tune fills the air. I wake suddenly from my dream. There is no music box! And yet, there it is—a tiny one nestled in my hand. And I awaken from my dream again as if I were peeling an onion. It’s a dream. No matter how far I go, I can never reach reality, trapped in an endless nightmare.”

14. “You’re tense. I’m calm. You apply excessive force, and I control that force through fluid motion. That means relaxing the whole body so it can react instantly without resistance—no, without thought.”

18. “Fearless is dead. I go by Spike Spiegel these days.”

28. “I don’t think Charlie Parker would be caught quoting Goethe.”

29. “That’s the story. And what was the real lesson? Don’t leave things in the fridge.”

32. “There are three things I hate the most: kids, pets, and women with attitude. So, tell me, why do we have all of them packed into our ship!”

Funny Spike Spiegel Quotes for a Day Full of Laughs

36. “Why are everybody’s family problems, my problems? I’m the orphan.”

More Spike Spiegel Quotes to Know More About Him

38. “That’s what you did? You took all the money you stole from us, and you lost it gambling in a casino?”

39. “Hex is no longer here. There’s no one left but an old man who loves to play games.”

40. “You know better than anyone, without looking. He was a terrific guy. Exactly the person you thought he was.”

Did Spike Spiegel Inspire You to Focus On the Things You Can Control?

Unlike many of us, Spike Spiegel is a person who accepts the outcome of the things he cannot control. He knows that crying over spilled milk will never solve anything. Instead, he just tries to focus on himself, his emotions, and what he does have control over.

He teaches us to reframe our minds and change our attitudes regarding the bad experiences we have in life. With his philosophy, we learn to accept how unpredictable everything is, and we can only go with the flow.

So, we hope that these quotes were able to show you the things worth holding on to and those that need letting go. Spike Spiegel’s words truly allowed us to learn and turn our lives around. When you re-watch Cowboy Bebop, make sure to remember the lessons you’ve learned from this list!

Which Spike Spiegel quote is the best for you? Do you have more quotes to add to the collection? Comment below!