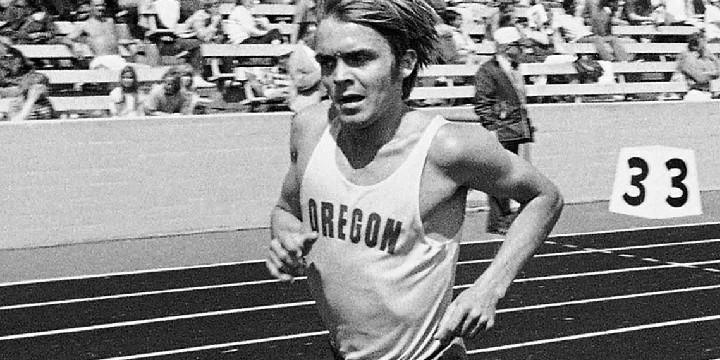 Bring out the best in you through these Steve Prefontaine quotes that will push you to your limits.

Steve Prefontaine was an American long-distance runner who had an incredible talent and love for running. He set records in every distance from 2,000-meter to 10,000-meter run.

Steve discovered his passion for running when he realized that he excelled at the long-distance races in his class.

His undying fire for being the greatest sparked an inspiration to many. Dying at a young age, he left a legacy that people will never forget.

Learn more about how he paved the way for success by reading the full collection below.

And don’t forget to check out these running quotes and Robin Arzon quotes.

2. “What I like most about the track is the feeling I get inside after a good run.”

3. “To give anything less than your best is to sacrifice the gift.”

4. “Somebody may beat me, but they are going to have to bleed to do it.”

6. “It really gets grim until the competition begins. You have to wonder at times what you’re doing out there. Over the years, I’ve given myself a thousand reasons to keep running, but it always comes back to where it started. It comes down to self-satisfaction and a sense of achievement.”

9. “My philosophy is that I’m an artist. I perform an art—not with a paintbrush or a camera. I perform with bodily movement. Instead of exhibiting my art in a museum, or a book, or on canvas, I exhibit my art in front of the multitudes.”

11. “Some people create with words, or with music, or with a brush and paints. I like to make something beautiful when I run. I like to make people stop and say, ‘I’ve never seen anyone run like that before.’ It’s more than just a race. It’s a style. It’s doing something better than anyone else. It’s being creative.”

12. “A race is a work of art that people can look at and be affected in as many ways they’re capable of understanding.”

13. “I’m the one who has made all the sacrifices. Those are my American records, not the country’s.”

14. “I have a positive mental attitude, and I think I’m divine, but I also think it takes a heck of a lot of blood, sweat, and tears.”

15. “I don’t just go out there and run. I like to give people watching something exciting.”

18. “It doesn’t feel that good when you’re ahead the whole way.”

19. “When people go to a track meet, they’re looking for something—a world record, something that hasn’t been done before. You get all this magnetic energy, people focusing on one thing at the same time. I really get excited about it. It makes me want to compete even more. It makes it all worthwhile, all the hours of hard work.”

20. “Success is not how far you’ve got, but the distance you traveled from where you started.”

21. “You said I was weak. You said I couldn’t do it. Thank you. You gave me everything I needed to prove you wrong.”

22. “You have to give yourself more reasons to keep going than you could ever come up with to stop. In the end, the feeling of satisfaction that you will have will be worth it.”

25. “Every once in a while, I think, ‘What am I doing out here running, busting myself up? Life could be so much easier. The other guys are out having fun, doing other things, why not me?'”

26. “If I lose, forcing the pace all the way, well, at least I can live with myself. But if it’s a slow pace, and I get beaten by a kicker who leeches off the front, then I’ll always wonder, ‘What if?'”

27. “American athletes, especially distance runners, are at a big disadvantage against the rest of the world. We’re expected to live by all the rules, like not being able to coach, but still train and make our own living.”

28. “I’ll tell you one thing. I love every one of them. I’ve thought about the Olympic Games every day of my life since 1968, but there is a breaking point in each race when you wonder if all the sacrifice is really worth it. You think, ‘Why should I do this? I don’t have to run this hard.’ But that’s when I think about them. They keep me going.”

29. “I’ve been in international competition, and now, I know what the big boys can do. You don’t go out and just run. There’s an offense and a defense.”

32. “People say I should be running for a gold medal for the old red, white, and blue, and all that bull, but it’s not gonna be that way.”

33. “This is my last year at Oregon, and it means a lot to me. The people have been great to me up there, so if I have to run three races to win the Pac-8 title, I’ll do it. Oh, sure, I’ll probably be tired, but the people shouting will carry me across the finish line.”

36. “Coos Bay is a sports-minded town. You had to be an athlete to be somebody.”

37. “There are big odds against me. Nobody under 25 has ever won the Olympic Five. But if everything goes right, whoever wins will know he has been in one hell of a race.”

39. “I decided that if I was going to continue in track, that I didn’t want to lose—that I wasn’t going to lose.”

42. “I know places you better speak low if you’ve been to college. Men will come across the room and cold-deck you if you hold your glass wrong.”

43. “Did you ever run behind a slow pack? You get a trailing wind and a lot of body odor.”

45. “Many of life’s failures are people who did not realize how close they were to success when they gave up.”

Powerful Steve Prefontaine Quotes That Prove That He Is a Legend

48. “No matter what you do, there is always more to it. You could be running, driving a bus, or answering phone calls, and there can still be a deeper meaning for why it matters. When you dig deep and find that meaning, it adds depth to your life.”

49. “I used to say, ‘Hey, man, what kind of a stupid question is that?’ to a newspaperman asking me heavy things right after a race when I’m still in an emotional state. Now, I at least try to answer.”

51. “If I want to go to Europe and get thrashed by the Europeans, that’s my business. Every race I lose, I learn from and get tougher.”

52. “I knew I had to show everybody that I could excel at something, but I didn’t know what.”

54. “Having a true faith is the most difficult thing in the world. Many will try to take it from you.”

56. “You cannot propel yourself forward by patting yourself on the back.”

58. “When you get to the point in a race or in life where you want to stop, you have to think about that goal that you want to achieve, and it will give you the strength to push a bit harder.”

59. “People often cheat themselves by giving less than their best. Talent will only take you so far, and by not providing a sincere effort, you are not taking advantage of the gift.”

Steve Prefontaine Quotes to Think About

61. “There’s always someone trying to talk you out of what you believe in. Anybody. Everybody. Your own mother. All I know is that if you do believe in something, you tend to make people very, very nervous. I believe in myself.”

62. “I guess you shouldn’t believe everything you hear.”

64. “When things get tough, you have to remember why you started putting in work in the first place.”

65. “If he’s having a good day and running the right race, nobody can beat Frank Shorter at 10,000 meters, nobody except me.”

67. “I don’t want to win unless I know I’ve done my best, and the only way I know to do that is to run out front, flat out, until I have nothing left. Winning any other way is chicken shit.”

68. “You probably chose x-country because you were too small to play football.”

69. “The best way to live is when you are pushing yourself to the max.”

70. “I hate all this gung-ho, run-for-the-red-white-and-blue attitude that the AAU spouts. If that’s important to some people, fine, more power to them. But, damn it, I wish they’d leave me alone to do what I want to do—run against the best.”

Did You Learn a Lot From Steve Prefontaine?

Steve Prefontaine is wise beyond his years. His words are not only for people interested in running—it is for everyone who has a dream in life.

It is part of reality to feel pain and sweat on the road to success. Not everyone has the determination and passion for continuing their goals even if they are bleeding. Steve taught us how hard it is to reach the finish line because he knows that you can never choose an easier path.

To be great is to have guts and willpower. We hope that this collection helps you keep going for your dreams.

Which quote is your personal favorite and why? Let us know in the comments section below.