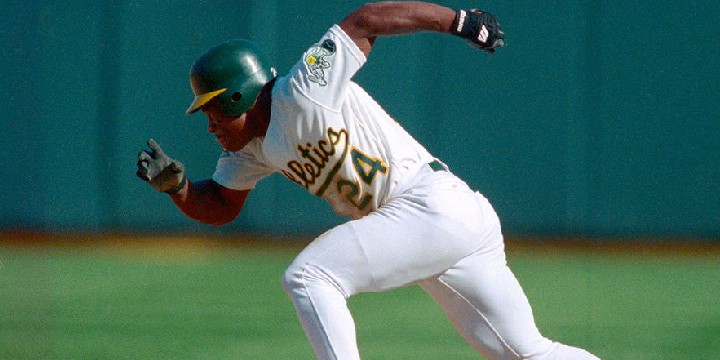 Reading through these top 40 Rickey Henderson quotes is a great way to start your journey toward your goals in life.

One of the most iconic figures in baseball is Rickey Henderson. He’s a retired professional baseball player who spent 24 seasons with the MLB. Because of his contributions to his teams and the sport, he was inducted into the Baseball Hall of Fame in 2009.

You might know him as the player who combined power and speed to produce record-breaking results. But, what fans really remember about him is his absolute love for baseball. This was what solidified his place and legacy in the hearts and minds of people worldwide.

Rickey Henderson is proof that skill is not the only thing you need to succeed in what you want out of life. You also have to love it and have a passion for it. Learn more about him and his baseball career through our collection below!

And don’t forget to check out these baseball quotes and Joe DiMaggio quotes.

2. “Even the slowest guy can go from first to third and help win a ballgame.”

3. “If my uniform doesn’t get dirty, I haven’t done anything in the baseball game.”

4. “You have to keep running. I always believed I was going to be safe.”

5. “Nothing’s impossible for Rickey. You don’t have enough fingers and toes to count out Rickey.”

6. “Once you can accept failure, you can have fun and success.”

8. “I don’t think I could have dreamt it up any better than how things went, of being at my peak at just the right time, and having everything go my way.”

9. “People say I stole a lot of bases. I stole the bases for a reason. I crossed the plate.”

10. “I don’t think some of the players understand what the people are about. The people are coming out to show you their appreciation of the game and the player that you are.”

12. “Speeches and me don’t get along sometimes. It is kind of like putting a tie too tight on my neck. I’m going to do whatever feels right.”

13. “My impact on the game was going out there and making things happen.”

14. “I was stealing all the bases, and when you had to go to arbitration, they said, ‘You know, only the big boys make the money.’ So I got to try and figure out how to hit a home run, too.”

18. “Do I talk to myself? No, I just remind myself of what I’m trying to do. You know, I never answer myself, so how can I be talking to myself?”

Rickey Henderson Quotes That Will Forever Be Iconic

21. “This is Rickey calling on behalf of Rickey. Rickey wants to play baseball.”

22. “Rickey don’t like it when Rickey can’t find Rickey’s limo.”

25. “Let’s see, for breakfast, Rickey will have bacon and eggs and grits if I can get ’em.”

26. “Lou Brock was a great base stealer, but today I am the greatest.”

27. “It’s just baseball. You always expect every team to go through this at one time or another.”

28. “In baseball, you train the whole body, except for the hip and eyes.”

29. “I have always had fun playing the game of baseball because I loved it so much.”

30. “It’s always exciting that you can rub elbows with some of the greatest players who have ever played the game and just be around the family again from baseball.”

More Rickey Henderson Quotes to Learn About His Career and Ambition

31. “I don’t want to be one of those great players who never made it to the World Series.”

32. “To me, the most important thing was stirring things up and scoring some runs so we could win a ballgame.”

34. “I told myself that if I ever make it to the big leagues that I would be the one to appreciate the fans. Take a little time out to sign autographs and shake their hands and say hello to them.”

35. “People recognize me—but if you’ve been in the public eye as long as I have and people don’t recognize you, I feel bad about myself.”

36. “You never had the opportunity to play with some of the great ballplayers, but being that close around them, and being in the same category, was a great feeling, to feel that vibe of all the best players who played the game.”

37. “Certain guys, they can see a guy do a certain thing with their glove and know what pitch is coming. I couldn’t do that. But I can get on first base, and I can tell you by his move if that pitcher is going to first base or home plate every time.”

39. “I wanted to be a part of something special, and contributing to the launch of a new league was very exciting to me.”

40. “When I first started in the big leagues, I felt that as a leadoff hitter, my job was to get on the basepaths, create stuff and score some runs to help my teammates win some ball games. It just so happens that over the 23 years, I think I went out there and did my job as well as I could do, and all of a sudden, it’s a record-breaker. It’s just an honor.”

Do You Think Baseball Is a Sport That’s Closely Tied to Life?

Many people—players, coaches, and fans alike—consider Rickey Henderson one of the greatest players of all time. His skill and talent were just so admirable and out of this world that if you’re his opponent, you’ll immediately have the feeling of wanting to back off. He was fast, he hit well, and he was just an overall great player.

However, his skills weren’t the only thing we could look up to. It’s his dedication and love for the game that stood out. Without these things, he might just be another baseball player who topped charts and broke records.

Rickey Henderson’s legacy remains relevant for many aspiring athletes and people taking on different fields. This is because the values we learn from him extend to other aspects of our lives, too.

So, like him, always do your best in everything you do. Whatever path you choose, move through it with love and dedication. With that, we hope these Rickey Henderson quotes were able to help you understand that there’s more to success and glory than just talent and skill.

Are you a fan of Rickey Henderson? Did we miss any good quotes from him? Please, share your thoughts below!