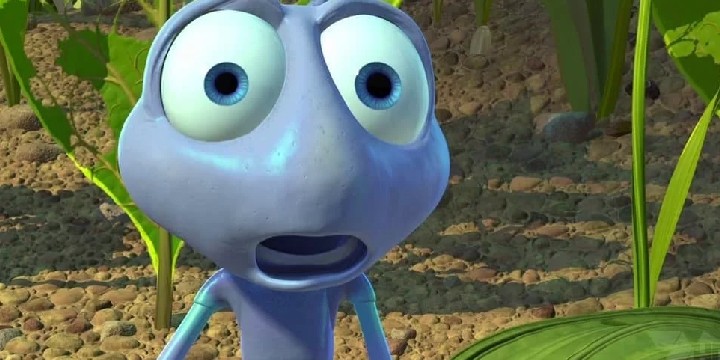 Read this list of A Bug’s Life quotes, as it will remove all your fear and hesitations from trying new things!

A Bug’s Life tells the story of an ant colony that is forced by a group of grasshoppers to give half of the food they collected. However, one of the members, Flik, is an ant with many inventions. He believes that his ideas will free them from the grasshoppers’ control.

Unfortunately, the colony’s leader rejects his ideas out of fear of going against the grasshoppers. They have long accepted that it’s their role in society since they are just ants. Yet, Flik is confident that he can free his colony from slavery and is determined to do so.

He decides to stand up for his family. In a way, His actions showed how much courage a tiny insect can have, and that inspired the rest of the colony, including The Queen and Princess Atta. They all realize their combined strength can defeat the grasshoppers, which they ultimately do!

Flik’s actions prove that you can make a difference no matter how small and insignificant you feel because of others’ rejections. Keep reading to learn more about ants, grasshoppers, and other bugs!

2. Hopper: “You piece of dirt! No, I’m wrong. You’re lower than dirt. You’re an ant! Let this be a lesson to all you ants! Ideas are very dangerous things! You are mindless, soil-shoving losers put on this Earth to serve us!”

Flik: “You’re wrong, Hopper. Ants are not meant to serve grasshoppers! I’ve seen these ants do great things, and year after year they somehow manage to pick the food for themselves and you. So who is the weaker species? Ants don’t serve grasshoppers! It’s you who needs us! We’re a lot stronger than you say we are. And you know it, don’t you?”

3. “You see, Hopper, nature has a certain order. The ants pick the food, the ants eat the food, and the grasshoppers leave.” – Princess Atta

5. Hopper: “You let one ant stand up to us, then they all might stand up. Those puny little ants outnumber us a hundred to one. And if they ever figure that out, there goes our way of life! It’s not about food. It’s about keeping those ants in line. That’s why we’re going back! Does anybody else wanna stay?”

Molt: “He’s quite the motivational speaker, isn’t he?”

Princess Atta: “Isn’t it up there?”

Princess Atta: “The food was sitting on a leaf on top—.”

Princess Atta: “Are you sure it’s not up there?”

Hopper: “Are you saying I’m stupid?”

The Queen: “She’s learning to take over for me, Hopper.”

Hopper: “Oh, I see. Under new management. So it’s your fault.”

Hopper: “Uh, uh. First rule of leadership—everything is your fault.”

Hopper: “It’s a bug-eat-bug world out there, Princess, one of those circle-of-life kinds of things. Now, let me tell you how things are supposed to work. The sun grows the food, the ants pick the food, the grasshoppers eat the food—.”

Molt: “And the birds eat the grasshoppers. Hey, like the one that nearly ate you, you remember? Oh, you should have seen it. This blue jay has him halfway down his throat, and Hopper’s kicking and screaming, and I’m scared. I’m not going anywhere near, okay? Aw, come on. It’s a great story. Ow, ow, ow.”

Hopper: “I swear, if I hadn’t promised Mother on her deathbed that I wouldn’t kill you, I would kill you.”

Molt: “And believe me, no one appreciates that more than I do.”

Molt: “Well, how could I answer? You said I couldn’t say another word. Remember Ma!”

Hopper: “Hey, I’m a compassionate insect. There are still a few months till the rains come, so you can all just try again.”

The Queen: “But, Hopper, since it’s almost the rainy season, we need this time to gather food for ourselves.”

Hopper: “Listen, if you don’t keep your end of the bargain, then I can’t guarantee your safety. And there are insects out there that will take advantage of you. Someone could get hurt. What’s the matter? You scared of grasshoppers?”

Flik: “Oh, I know it’s a rock, I know. But let’s just pretend for a minute that it’s a seed, alright? We’ll just use our imaginations. Now, do you see our tree? Everything that made that giant tree is already contained inside this tiny little seed. All it needs is some time, a little bit of sunshine and rain, and voilá!”

Flik: “Seed to tree. You’ve gotta work with me, here. Alright? Okay. Now, you might not feel like you can do much now, but that’s just because, well, you’re not a tree yet. You just have to give yourself some time. You’re still a seed.”

Flik: “I know it’s a rock! Don’t you think I know a rock when I see a rock? I’ve spent a lot of time around rocks!”

Francis: “You name the place!”

Francis: “Yes! ‘Cause when you get there, you are dead!”

Slim: “Francis, let me handle this. That’s no way to speak to a lady.”

Francis: “I heard that, you twig!”

10. “Ladies and gentle bugs! Larvae of all stages! Rub your legs together for the world’s greatest bug circus!” – Slim

Francis: “So, being a ladybug automatically makes me a girl! Is that it, flyboy?! Huh?”

Heimlich: “Francis, leave them alone! They are poo-poo heads!”

Francis: “Judging by your breath, you must’ve been buzzin’ around a dung heap all day!”

Flik: “You were gonna squish The Queen.”

Hopper: “I hate it when someone gives away the ending.”

13. “How many roaches does it take to screw in a light bulb? Can’t tell. Soon as the light goes on, they scatter.” – Slim

Mr. Soil: “Do not panic, do not panic. We are trained professionals. Now, stay calm. We are going around the leaf.”

17. “For the colony, and for oppressed ants everywhere!” – Flik

A Bug’s Life Quotes to Appreciate This Awesome 1998 Movie

Heimlich: “I hate performing on an empty stomach!”

Slim: “What’s the point of going out there? They’ll only laugh at me.”

Slim: “No. It’s because I’m a prop! You always cast me as the broom, the pole, the stick! A splinter!”

Slim: “Uh, yes. We were invited by Princess Atta as a surprise for your arrival.”

23. Hopper: “Guys, order another round because we’re staying here! What was I thinking? Going back to Ant Island. I mean, we just got here, and we have more than enough food to get us through the winter. Right? Why go back? But there was that ant that stood up to me.”

Axel: “Yeah, but we can forget about him!”

Hopper: “Well, how about this one?”

Axel: “Are you kidding?”

Hopper: “Well, how about this?”

24. “Making all stops to the septic tank, including standing water, empty bean can, and dead rat!” – Bus Beetle

25. Manny: “Utilizing psychic vibrations, I shall select the perfect volunteer.”

Are You Someone Who Inspires Changes in Your Community?

In the movie, the ants have already accepted responsibility for accommodating the grasshoppers. They get the job done with no questions asked. Sadly, they believe they don’t have a choice and a chance to change the system as they’ve already been doing it for years; it’s always been done that way.

It’s the same in real life, where we see people settle for abuse because they have been used to it. We get stuck with the idea that everyone will disregard us if we raise our concerns. As a result, we continue doing things even if we know it’s not good and healthy for us.

Many think we have no power to turn the situation around. But, whenever your head’s in this line of thought, look back on the lessons you’ve learned from A Bug’s Life. In it, it only takes one ant who feels insignificant to spark change.

The same goes for us; it often takes just one person to fight, and everyone will gain the courage to stand up. Remember that you can always make a difference no matter how big or small your role in society is. Get out of your comfort zone and try to make a change!