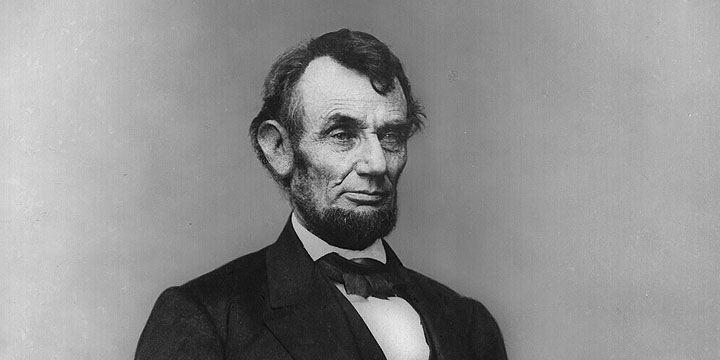 These Abraham Lincoln quotes will prove why he’s the greatest president of America.

Abraham Lincoln was the 16th president of the United States. He’s known for many things. But, he’s most remembered for abolishing slavery and saving the Union.

Like most of us, Abraham Lincoln achieved his goals by starting from scratch. He self-studied to become a lawyer and a leader. But, most of all, what is really inspirational about his actions is his desire to fight for freedom for all.

Lincoln’s legacy is having hope for a future free from slavery, illegal punishment, and abuse. With his persistence and courage, he proved why he was a great leader who had a strong love for his people.

So, if you need some wise words about politics, then make sure to read the complete collection below.

2. “Always bear in mind that your own resolution to succeed is more important than any one thing.”

3. “The best way to predict your future is to create it.”

6. “Character is like a tree, and reputation is its shadow. The shadow is what we think it is, and the tree is the real thing.”

7. “Folks are usually about as happy as they make their minds up to be.”

9. “Leave nothing for tomorrow which can be done today.”

10. “You cannot escape the responsibility of tomorrow by evading it today.”

11. “No man is good enough to govern another man without the other’s consent.”

13. “My concern is not whether God is on our side. My greatest concern is to be on God’s side, for God is always right.”

14. “It is for us the living, rather, to be dedicated here to the unfinished work which they who fought here have thus so far nobly advanced.”

15. “No man has a good enough memory to be a successful liar.”

17. “Human action can be modified to some extent, but human nature cannot be changed.”

18. “The struggle of today is not altogether for today. It is for a vast future also.”

19. “You can tell the greatness of a man by what makes him angry.”

20. “Do I not destroy my enemies when I make them my friends?”

21. “Whenever I hear anyone arguing for slavery, I feel a strong impulse to see it tried on him personally.”

22. “You are ambitious, which, within reasonable bounds, does good rather than harm.”

23. “It has been my experience that folks who have no vices have very few virtues.”

26. “America will never be destroyed from the outside. If we falter and lose our freedoms, it will be because we destroyed ourselves.”

27. “Every man is said to have his peculiar ambition. Whether it be true or not, I can say for one that I have no other so great as that of being truly esteemed of my fellow men by rendering myself worthy of their esteem. How far I shall succeed in gratifying this ambition is yet to be developed.”

28. “In giving freedom to the slave, we assure freedom to the free, honorable alike in what we give and what we preserve. We shall nobly save or meanly lose the last best hope of earth.”

Short Abraham Lincoln Quotes That Are Full of Meaning

29. “You can’t make a weak man strong by making a strong man weak.”

30. “It often requires more courage to dare to do right than to fear to do wrong.”

31. “A house divided against itself cannot stand.”

33. “Avoid popularity if you would have peace.”

35. “The ballot is stronger than the bullet.”

37. “Tact is the ability to describe others as they see themselves.”

38. “I would rather be a little nobody, than to be an evil somebody.”

40. “You have to do your own growing no matter how tall your grandfather was.”

42. “Every man’s happiness is his own responsibility.”

43. “I do not think much of a man who is not wiser today than he was yesterday.”

44. “We can complain because rose bushes have thorns, or rejoice because thorn bushes have roses.”

45. “Those who look for the bad in people will surely find it.”

46. “Better to remain silent and be thought a fool than to speak out and remove all doubt.”

47. “Give me six hours to chop down a tree, and I will spend the first four sharpening the ax.”

49. “He has a right to criticize who has the heart to help.”

50. “That some achieve great success is proof to all that others can achieve it as well.”

52. “Things may come to those who wait, but only the things left by those who hustle.”

53. “I’m a success today because I had a friend who believed in me, and I didn’t have the heart to let him down.”

54. “Be sure you put your feet in the right place, then stand firm.”

55. “Nearly all men can stand adversity, but if you want to test a man’s character, give him power.”

57. “Our reliance is in the love of liberty which God has planted in our bosoms. Our defense is in the preservation of the spirit which prizes liberty as the heritage of all men, in all lands, everywhere.”

58. “We have, as all will agree, a free government, where every man has a right to be equal with every other man. In this great struggle, this form of government and every form of human right is endangered if our enemies succeed.”

59. “The world has never had a good definition of the word liberty, and the American people, just now, are much in want of one. We all declare for liberty, but in using the same word, we do not all mean the same thing.”

60. “On the question of liberty, as a principle, we are not what we have been. When we were the political slaves of King George and wanted to be free, we called the maxim that ‘all men are created equal’ a self-evident truth, but now, when we have grown fat and have lost all dread of being slaves ourselves, we have become so greedy to be masters that we call the same maxim ‘a self-evident lie.'”

Abraham Lincoln Quotes for Those Who Want to Learn About Slavery

62. “You cannot help people permanently by doing for them what they could and should do for themselves.”

63. “Every advocate of slavery naturally desires to see blasted and crushed, the liberty promised the Black man by the new constitution.”

64. “All I ask for the Negro is that if you do not like him, let him alone. If God gave him but little, that little, let him enjoy.”

66. “I think we have fairly entered upon a durable struggle as to whether this nation is to ultimately become all slave or all free, and though I fall early in the contest, it is nothing if I shall have contributed, in the least degree, to the final rightful result.”

67. “This is a world of compensations, and he who would be no slave, must consent to have no slave. Those who deny freedom to others deserve it not for themselves, and under a just God, can not long retain it.”

68. “The probability that we may fail in the struggle ought not to deter us from the support of a cause we believe to be just.”

69. “I can see how it might be possible for a man to look down upon the earth and be an atheist, but I cannot conceive how a man could look up into the heavens and say there is no God.”

Did These Quotes Convince You That Abraham Lincoln Was the Best President?

Being a leader does not mean being the most intelligent and active person in the country. It means having the heart to help and empower people, even if they are not your constituents.

Like Abraham Lincoln, we must have the genuine want and lifetime dedication to improving people’s lives. Our love and commitment to liberty are some of the most crucial things that will lead our country to greatness. So, it is vital to start focusing our efforts on amplifying our calls for absolute freedom.

Hopefully, these quotes were able to inspire you to be persistent in reaching a just society for everyone. Use these quotes whenever you need a little push forward!

What is your biggest takeaway from these quotes? Have you watched documentaries about Abraham Lincoln? Share your thoughts with us!

1 thought on “70 Abraham Lincoln Quotes on Freedom and Slavery”