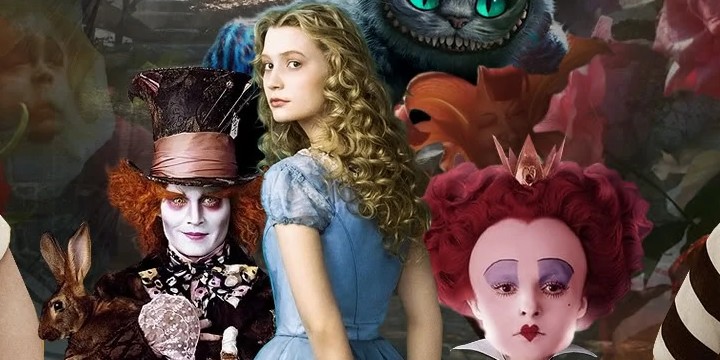 Let’s go down the rabbit hole together through these Alice in Wonderland quotes and explore the magical world created by Lewis Carroll.

Since being published in 1865, this widely famous and beloved children’s book forever changed the landscape and standards of children’s literature.

Though filled with fantasy and wonder, it also introduced a variety of questions and challenges on self-identity and the human mind.

Get to know more about Alice in Wonderland through the full collection below.

And don’t forget to check out these The Princess Bride quotes and Beauty and the Beast quotes.

1. “Visit either one you like—they’re both mad.” – Cheshire Cat

2. “Imagination is the only weapon in the war with reality.” – Cheshire Cat

3. “Well! I’ve often seen a cat without a grin, but a grin without a cat! It’s the most curious thing I’ve ever seen in all my life!” – Alice

5. “Not at all, she’s so extremely likely to win that it’s hardly worth while finishing the game.” – Alice

7. “How queer everything is today! And yesterday, things went on just as usual.” – Cheshire Cat

10. “Only a few find the way. Some don’t recognize it when they do, some don’t ever want to.” – Cheshire Cat

12. “What do you mean by that? Explain yourself!” – Caterpillar

13. “There might be some sense to your knocking, if we had the door between us. For instance, if you were inside, you might knock and I could let you out, you know.” – Cheshire Cat

14. “I wonder if I’ve changed in the night? Let me think. Was I the same when I got up this morning?” – Cheshire Cat

17. “Speak English! I don’t know the meaning of half those long words, and what’s more, I don’t believe you do either!” – Eaglet

18. “The Duchess! The Duchess! Oh my dear paws! Oh my fur and whiskers! She’ll get me executed, as sure as ferrets are ferrets!” – White Rabbit

Alice in Wonderland Quotes on Self-Identity and Reality

22. “Why, there’s hardly enough of me left to make one respectable person!” – Alice

24. “If everybody minded their own business, the world would go round a deal faster than it does.” – Duchess

25. “Somebody said that it’s done by everybody minding their own business!” – Alice

26. “I am not crazy; my reality is just different from yours.” – Cheshire Cat

30. “Well, some go this way, and some go that way. But as for me, myself, personally, I prefer the shortcut.” – Cheshire Cat

35. “How funny it’ll seem to come out among the people that walk with their heads downwards!” – Alice

39. “Now, if you only kept on good terms with him, he’d do almost anything you liked with the clock.” – Mad Hatter

Alice in Wonderland Quotes on Morals and Lessons

43. “I never get involved in politics.” – Cheshire Cat

45. “Ah, well! It means much the same thing, and the moral of that is, ‘Take care of the sense, and the sounds will take care of themselves.’” – Duchess

46. “The proper order of things is often a mystery to me.” – Cheshire Cat

47. “And no scheme of ours can raise any sort of smile.” – Cheshire Cat

48. “The uninformed must improve their deficit, or die.” – Cheshire Cat

50. “No one does play fair if they think they can get away with it.” – Cheshire Cat

54. “Never let anyone drive you crazy; it is nearby anyway and the walk is good for you.” – Cheshire Cat

57. “And what is the use of a book, without pictures or conversations?” – Alice

58. “I shall be punished for it now, I suppose, by being drowned in my own tears!” – Alice

63. “Begin at the beginning, and go on till you come to the end—then stop.” – King of Hearts

65. “Only the insane equate pain with success.” – Cheshire Cat

66. “You must have meant some mischief, or else you’d have signed your name like an honest man.” – King of Hearts

69. “You learn something new every day. Make a note of that, Marchy, it might come in useful.” – Mad Hatter

70. “Rule forty-two—all persons more than a mile high to leave the court.” – King of Hearts

71. “You’d only have to whisper a hint to Time, and round goes the clock in a twinkling!” – Mad Hatter

73. “I think you might do something better with the time than waste it by asking riddles that have no answers.” – Alice

75. “You know what the issue is with this world? Everyone wants some magical solution to their problem and everyone refuses to believe in magic.” – Mad Hatter

76. “You can draw water out of a water well, so I should think you could draw treacle out of a treacle well.” – Mad Hatter

78. “Haste makes waste, so I rarely hurry. But if a ferret were about to dart up my dress, I’d run.” – Cheshire Cat

Alice in Wonderland Quotes on Life, Adventure, and Wonder

81. “The time has come, to talk of other things—shoes, and ships, and sealing wax, and cabbages and kings. And why the sea is boiling hot, and whether pigs have wings. Calloo, Callay, no work today, we’re the cabbages and kings.” – The Walrus

83. “That’s the reason they’re called lessons, because they lessen from day to day.” – Gryphon

84. “When the day becomes the night and the sky becomes the sea, when the clock strikes heavily and there’s no time for tea; and in our darkest hour, before my final rhyme, she will come back home to Wonderland and turn back the hands of time.” – Cheshire Cat

85. “No wise fish would go anywhere without a porpoise.” – The Mock Turtle

86. “If you don’t know where you are going, any road can take you there.” – Cheshire Cat

87. “You mean you can’t take less. It’s very easy to take more than nothing.” – Mad Hatter

89. “How fine you look when dressed in rage. Your enemies are fortunate your condition is not permanent. You’re lucky, too. Red eyes suit so few.” – Cheshire Cat

92. “When I used to read fairy tales, I fancied that kind of thing never happened, and now here I am in the middle of one!” – Alice

93. “I went to a hunting party once, I didn’t like it. Terrible people. They all started hunting me!” – Cheshire Cat

96. “There is a place like no place on earth—a land full of wonder, mystery, and danger. Some say, to survive it, you need to be as mad as a hatter. Which, luckily, I am.” – Mad Hatter

98. “Somehow, you strayed and lost your way, and now there’ll be no time to play, no time for joy, no time for friends—not even time to make amends.” – Cheshire Cat

99. “That depends a good deal on where you want to get to.” – Cheshire Cat

102. “It wasn’t very civil of you to sit down without being invited.” – March Hare

105. “It’s a poor sort of memory that only works backwards.” – Queen of Hearts

107. “Why, sometimes I’ve believed as many as six impossible things before breakfast.” – The White Queen

108. “Well, in our country, you’d generally get to somewhere else—if you ran very fast for a long time, as we’ve been doing.” – Alice

109. “Now, here, you see, it takes all the running you can do, to keep in the same place. If you want to get somewhere else, you must run at least twice as fast as that!” – Queen of Hearts

110. “It’s no use going back to yesterday, because I was a different person then.” – Alice

Did These Alice in Wonderland Quotes Help You Figure Out Your True Self?

The story begins when Alice took a leap down the rabbit hole. There, she encounters different creatures in a magical place. And though the whole story may seem mad, weird, or even insane, it’s ultimate goal is to answer one of the questions Alice faced in the beginning of the story—‘Who in the world am I?’ Every second in the film and every word in the book is a step towards discovering who she really is.

And along this journey, she’s also able to learn to accept the differences of others and embrace her quirks. The same is true with life: learning more about ourselves and others makes life more interesting and gives us a chance to see the world in a different light. So let’s all be more understanding of others and be more curious about the world around us. Let’s all embrace both the ordinary and the magical.

Which ones are your favorite quotes from this collection? Who’s your favorite Alice in Wonderland character? Let’s talk about your thoughts in the comments section below.