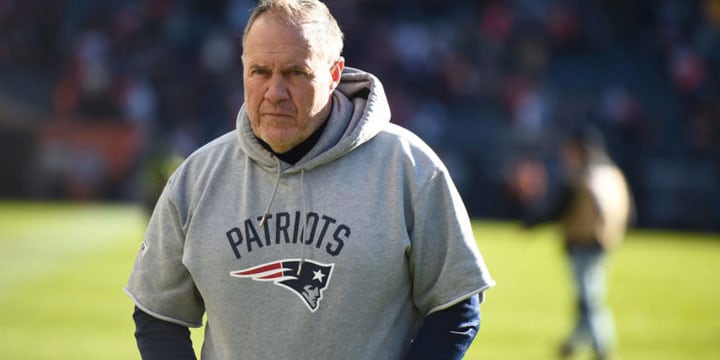 If you’re a fan of football or sports in general, then you’ll enjoy this list of the 60 best Bill Belichick quotes!

Bill Belichick currently heads the New England Patriots. He’s most famous for leading the team to six Super Bowl titles from 2002 to 2009.

As wild as it may seem, this is the most wins for an NFL head coach, making Belichick a legend in the industry.

He was exposed to football as a child, as his father was an assistant football coach in the United States Naval Academy.

He also played football for a while and coached different teams. But, he ultimately found his home and family with the New England Patriots.

So, if you’re curious about the sport or just want to know more about this incredible individual, make sure you check out our complete collection below!

And don’t forget to check out these Tom Brady quotes and Ray Lewis quotes.

1. “The less versatile you are, the better you have to be at what you do well.”

2. “Mental toughness is doing the right thing for the team when it’s not the best thing for you.”

3. “Whatever happened in the past, whatever it is, it is. Nothing we can do about it. We’re moving on.”

4. “If you sit back and spend too much time feeling good about what you did in the past, you’re going to come up short next time.”

5. “I am who I am. In the end, I feel that what I’m accountable for is doing a good job as a football coach.”

6. “It’s not all about talent. It’s about dependability, consistency, and being able to improve.”

7. “You can play hard. You can play aggressive. You can give 120% but if one guy is out of position then someone is running through the line of scrimmage and he is going to gain a bunch of yards.”

8. “There are a lot of things that affect what happens on the field that occurs off the field.”

9. “‘Do your job!’ means being prepared, working hard, paying attention to the details, and putting the team first.”

10. “We’re always trying to do a better job on that and that’s what we’ll continue to do.”

12. “If you work hard and you’re coachable, and you understand what you need to do, you can improve.”

15. “I think that’s what competitors do: they compete—regardless of the score or situation.”

16. “I think a number of things that were strengths then are strengths now; I just think they are stronger.”

17. “We can always look back and second-guess things that were or weren’t done, but I’d say really the most important thing for us is to look at future decisions and try to make the best ones that we can.”

18. “We have absolutely done as much work as we can on finding out things like that and we’ll try to get all the information that we can as that would apply to any current situation, which I can’t talk about.”

Bill Belichick Quotes to Hype You Up

22. “I think that we’ll continue to try to look at ourselves in the mirror and see where we can do a better job, maybe where we can improve the process. But I think the fundamentals of the process will remain the same.”

23. “We never use the condition of the footballs as an excuse. We play with whatever or kick with whatever we have to use and that’s the way it is.”

25. “I don’t think that the issue is talent. It’s more from a consistency standpoint and being able to gain the experience, and do it competitively the right way every time.”

26. “I told you the one change we would make in the initial start level of the football pressure, but that’s really about it.”

27. “This is our best opportunity to pull everything together in terms of substitution, communication, execution, playing on the road, playing in a hostile environment, all of those kinds of things.”

30. “When you get wet, it usually means something good.”

33. “We’ll continue to work hard to do a better job in every area going forward. I don’t know where those little things will come from but we’ll continue to be diligent on them.”

34. “There are no medals for trying. This isn’t like eighth grade where everybody gets a trophy. We are in a professional sport, and it is competitive to win. That’s what we do.”

35. “The only sign we have in the locker room is from The Art Of War: every battle is won before it is fought.”

36. “Every game is an important game for us. Doesn’t matter what’s the next week—who we play, whether it’s a bye week, Thanksgiving, Christmas, Halloween, Columbus Day. We don’t care. We’re just trying to go out there and win a game.”

37. “What we can control are our performance and our execution, and that’s what we’re going to focus on.”

38. “Understanding what not to do sometimes is just as important as what you can do.”

39. “You have to know what the opponents can do, what their strengths and weaknesses are, and what to do in every situation!”

40. “Whatever success I’ve had, it is because I’ve tried to understand the situation of the player. I think the coach’s duty is to avoid complicating matters.”

42. “You know, that’s what good quarterbacks do, they make plays when things don’t go perfectly.”

44. “My personal coaching philosophy, my mentality, has always been to make things as difficult as possible for players in practice, however bad we can make them, I make them.”

45. “For a team to accomplish their goal, everybody’s got to give up a little bit of their individuality.”

46. “Knowing you have a good backup long snapper allows you to sleep good at night.”

47. “There are no shortcuts to building a team each season. You build the foundation brick by brick.”

48. “I think your team evolves every year. The more you know about it, the better you can coach it.”

Bill Belichick Quotes for All the Dreamers Out There

50. “There are certainly areas that you can improve in and develop more consistency in.”

51. “I think everyone is a case-by-case basis. Whatever the circumstances are that come with any individual, they exist and you have to make a determination as to what your comfort level is with that person and the characteristics that they bring.”

52. “Not all teams use the same tests and certainly, those tests are far from being 100% as well. It’s part of the process.”

53. “There have been times when I’ve put too much responsibility on people. They might have been the most talented, or the people you hoped would do the right or best thing, and they didn’t come through.”

Funny Bill Belichick Quotes That Say a Lot About His Personality

56. “I think it’s relatively easy to play defense against a team that can only do one thing.”

58. “It’s the business that you guys are in, too. We try to get as much information as we can and make the best decisions that we can for the football team.”

59. “I’d say just a quick reflection from me on the year would be, as I said yesterday, how much I respect and appreciate the team and the staff and the sacrifices that everyone has made so that we could even have a season—so that we could play football and play it competitively.”

60. “I think we always try to do what’s best for the football team, and that’s a combination of long-term and short-term.”

Do You Agree With Bill Belichick’s Coaching Style and Philosophy?

All sports are challenging and need a tremendous amount of effort and dedication. But, football is even more challenging because it’s a team sport like basketball, volleyball, and hockey. This means that the player doesn’t have to focus on improving just himself; he also needs to work with his other team members seamlessly.

As humans, we all have unique personalities that might not align with others. Working on ourselves is difficult as it is, so just imagine how hard it would be to adjust according to others’ strengths and weaknesses, too. But, as Bill Belichick pointed out, teamwork is 100% necessary to achieve greatness and win.

Even if you’re an outstanding player, you can’t make your team a champion by working on your own. After all, our weaknesses are compensated for by our teammates’ strengths. This give-and-take collaboration is one of the main foundations for a team’s success.

As in life, we can never really achieve happiness and a fulfilling life alone. We need other people—family, friends, and partners—to love and support us. We need them to guide us when we fall, and we need them when we celebrate life’s big or small joys.

Indeed, Bill Belichick’s lessons on teamwork and greatness extend beyond sports and into our personal lives. So, whenever you need advice from him, revisit the list above!

What else did you learn from today’s collection? Which of these Bill Belichick quotes are your favorites? Join the discussion below.