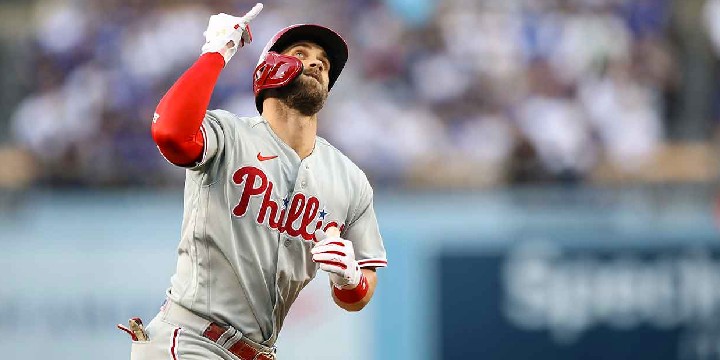 Let these Bryce Harper quotes inspire you to dedicate your whole heart and self to reaching your dreams in life.

Bryce Harper is a right fielder known for playing with the Philadelphia Phillies. He is also the first overall pick in the 2010 Major League Baseball draft and the youngest player to participate in an All-Star Game.

Bryce Harper is indeed a player with exceptional talents and charisma. But, he’s most loved and adored by the baseball community because of his dedication and passion for the sport. Even watching him play is already an inspiring story that will motivate you to reach your dreams.

So, if you need something that will push you to your limits, then read this Bryce Harper quote collection now!

Read on and be inspired by the words from one of the best baseball players in America.

And don’t forget to check out these baseball quotes and Rickey Henderson quotes.

1. “I’m a guy that wants to play every single day and get better.”

3. “I’d rather be a good person off the field than a good baseball player on the field.”

4. “You need to have dreams. So dream big, then work hard every day to make them happen.”

5. “You’ve got to love training and practice. It’s the only way to reach your potential.”

7. “If people aren’t laughing at your goals, they’re too small.”

8. “Some may have more talent than you, but there is no excuse for anyone working or playing harder than you do.”

Inspirational Bryce Harper Quotes That Will Ignite the Fire Inside You

14. “I put more pressure on myself than anybody in this world.”

15. “My dad, he worked rebar, an ironworker. Watching my pops get up every single morning, going into work, working hard, I think that really made me want to work that hard, wanted to make me get up early and go for a run or get a lift in or get some extra hitting in and really try to better myself every day.”

16. “Play this game like the 8-year-old you used to be, dreaming to play in the show! Heart, passion, and fire! Remember where you came from!”

17. “Playing football, I’m getting chills just thinking about it. That first knock of the game, you are going on kickoff, and you are just trying to smack somebody just as hard as you can. That’s how I play baseball. I want to hit you.”

18. “Baseball players have such a bad rap of, like, ‘We don’t work out, or we’re not strong or this or that.’ Guys work so hard in baseball. It’s incredible, but people don’t know that.”

19. “I don’t wish that I was playing football. I love baseball and the way I play it like it’s my last day ever playing it. I do like football, but you’ve got to respect that it’s not like baseball.”

21. “I want to play the game hard. I want to ram it down your throat, put you into left field when I’m going into second base.”

22. “The full thing is God-given. I don’t know how I got my swing or what I did. I know I worked every single day. I know I did as much as I could with my dad, but I never really looked at anything mechanical. There was nothing really like, ‘Oh, put your hands here.’ It was, ‘Where are you comfortable? You’re comfortable here. Hit from there.'”

23. “I really want to have a possibility of going into the Hall of Fame one day. I think that’s huge with a lot of baseball writers and old-school guys. Of course, that’s not the main goal. The main goal is winning a World Series. The Hall of Fame is so far away. It’s just something I’ve always thought about doing. I want to be as clean as I can.”

24. “It’s a tired sport because you can’t express yourself. You can’t do what people in other sports do. I’m not saying baseball is, you know, boring or anything like that, but it’s the excitement of the young guys who are coming into the game now who have flair. If that’s Matt Harvey or Jacob deGrom or Manny Machado or Joc Pederson or Andrew McCutchen or Yasiel Puig, there are so many guys in the game now who are so much fun.”

25. “When you hit a three-run triple, do you really need to get on third base or do you need to stand on the double? You got to be as smart as you can.”

Short Bryce Harper Quotes That Will Amaze You

26. “I expect perfection from myself.”

Bryce Harper Quotes to Learn About His Character

32. “I will never say anybody’s better than me. I don’t think those words will ever come out of my mouth.”

33. “People say, ‘Weren’t you deprived of your childhood?’ No way. I would not take anything back at all. Everything about it was great. I got to go places, meet people, play baseball against older kids, and better competition. I had a great time.”

34. “I think you have to be respectful to the people who want to talk to you.”

35. “I don’t want everybody to just see the baseball side of me.”

36. “It’s funny to me because everyone says I’m injury prone. That’s hilarious to me because I’ve never blown a hammy or a shoulder or anything like that, knock on wood.”

37. “I went to school, but nobody really noticed me. I just came to school, didn’t dress up or anything, just a ghost. I just worked out and went out to the field and went the baseball route. That’s how I’ve always been my whole life.”

38. “The things that I will miss most are the relationships I gained on a personal level with so many of the Nationals staff and workers around the ballpark. Every day I walked in, I got a smile or shared a laugh with you.”

Bryce Harper Quotes That Show How He Values His Health

39. “Staying healthy puts good numbers up. If you stay healthy and try to do the things that you can to win ball games and do what you can for your team, that’s all that matters.”

40. “Sleep is huge. That’s your biggest way of recovering. In baseball, it’s such a hard sleep schedule during the season, but you try to do the best you can. Because you can take all the protein drinks, you can do all these things, but your recovery is your sleep.”

41. “I want to get my eight hours and be able to eat good meals and not be sluggish or anything like that. My body is my temple, and I’ve always thought that.”

42. “I wish my abs were a little bit better. God gave me a great body, but I think my abs could be better than they are.”

44. “I like eating the right way, doing things the right way. I never had to have my dad come and say, ‘Hey, you have to get back to the gym’ or, ‘Hey, you’re eating wrong.'”

46. “I always wanted to be a major league baseball player.”

47. “I know more about UFC than the wrestling circuit. I think everybody’s a pretty good guy in the UFC.”

49. “D.C. fans, I think, are so good. They just come up to me, and they’re so nice and so polite and just, ‘Hey, I hope you have a great career,’ and ‘How are you doing? Everything’s good?’ That’s pretty much where they leave it at.”

50. “I think I play center field better than I do anywhere else. I have enough speed and enough reaction to know where the ball goes off the bat.”

Did These Quotes Change How You Look at Hard Work and Passion?

Hard work is not something you only do when needed. On the flip side, we should constantly sharpen our perseverance and passion our whole lives.

After all, having these tough traits is not something you have overnight because it is a characteristic that you will hone as long as you live. This is something that Bryce Harper has known since he was young. Even at the start of his career, he recognized that perseverance, grit, and passion are all necessary to become the best player.

Through Bryce Harper, we learn how our way of thinking and character affect how we reach our goals. He is a reminder that certain parts of ourselves are crucial in turning our dreams into reality. With that, we hope these Bryce Harper quotes were able to show you just what you need to do to go further in life.

Which Bryce Harper quote is your favorite? Are you a fan of his? Comment below.