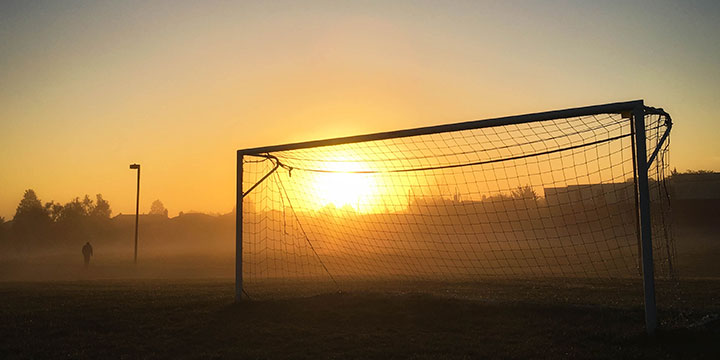 These soccer quotes will allow you to learn about perseverance, strength, and passion.

Soccer has a unique way of teaching people about life. It pumps us up because it is a fun sport, but it also gives us the experience of learning about setting goals and working for them.

It is a sport packed with wisdom and challenge that will help us grow. Playing it arms us with values and attitudes that will help us succeed in sports and any aspect of life. Through it, we also learn that focus, determination, and willpower are essential in achieving our goals.

So, if you are interested in these soccer quotes, don’t miss out on reading the list we’ve prepared. Check out our collection below and be enlightened about what goes on in every soccer game!

And don’t forget to check out these baseball quotes and golf quotes.

1. “Soccer is simple. You just need to have the right mentality, fighting in every game, in every practice, and for every ball.” – Hristo Stoichkov

2. “Soccer must be played with the heart, not with strength and talent as perceived.” – Asare Ben Chris

3. “Soccer matches should be something special, something people eagerly look forward to, something that brightens life.” – P. J. O’Rourke

4. “You need teamwork to achieve real success, and that attitude comes straight from soccer.” – Matt Bahr

6. “Good soccer players need not be titans sculpted by Michelangelo. In soccer, ability is much more important than shape, and in many cases, skill is the art of turning limitations into virtues.” – Eduardo Galeano

7. “A great soccer player is never content with their performance.” – Anonymous

8. “What we are missing over here is the life of soccer.” – Thomas Dooley

9. “In football, the result is an impostor. You can do things really, really well but not win. There’s something greater than the result, more lasting—a legacy.” – Xavi Simons

10. “You just can’t believe how quickly things happen in football and the way life turns. I went from being the bad guy, the worst player who gets all the criticism, to being the player who makes the difference and scores the important goals.” – Luis Suárez

11. “Some people think football is a matter of life and death. I don’t like that attitude. I can assure them it is much more serious than that.” – Bill Shankly

12. “I have the chance to do for a living what I like the most in life, and that’s playing football. I can make people happy and enjoy myself at the same time.” – Cristiano Ronaldo

13. “The wonderful thing about soccer is, a football is a perfectly round object, and it doesn’t make mistakes. The player using it makes mistakes. And the more you use it, the less mistakes you make.” – Craig Johnston

14. “In football, the worst blindness is only seeing the ball.” – Nelson Rodrigues

15. “The rules of soccer are very simple. Basically, it is this. If it moves, kick it. If it doesn’t move, kick it until it does.” – Phil Woosnam

16. “Soccer is not just about scoring goals. It’s about winning.” – Anonymous

17. “Life is like a game of soccer. You need goals. If there are no goals in your life, then you can’t win.” – Anonymous

18. “God gives gifts to everyone. Some can write, some can dance. He gave me the skill to play football, and I am making the most of it.” – Ronaldinho Gaúcho

19. “Most of us are in this more than just for playing soccer. We’re in it for the bigger goal, to move it along for the next generation.” – Landon Donovan

20. “I think if you’re not strong in life or in football, not every day is going to be going up and seeing the sunshine.” – Marco Reus

21. “You’ve got to believe you’re going to win, and I believe we’ll win the World Cup until the final whistle blows, and we’re knocked out.” – Peter Shilton

22. “When good soccer happens, I give thanks for the miracle, and I don’t give a damn which team or country performs it.” – Eduardo Galeano

24. “They’ll forget all the rubbish when I’ve gone, and they’ll remember the football. If only one person thinks I’m the best player in the world, that’s good enough for me.” – George Best

25. “Everything I know about morality and the obligations of men, I owe it to football.” – Albert Camus

26. “In football as in watchmaking, talent and elegance mean nothing without rigor and precision.” – Lionel Messi

28. “Soccer is simple, but it is difficult to play simple.” – Johan Cruyff

29. “Football is the ballet of the masses.” – Dmitri Shostakovich

31. “Football is an art players paint with their feet.” – Masood Alam Khan

32. “I learned all about life with a ball at my feet.” – Ronaldinho

33. “Behind every kick of the ball, there has to be a thought.” – Dennis Bergkamp

35. “When I was younger, soccer was my life. I always wanted to play.” – Alphonso Davies

36. “I think soccer kept me off the street.” – Memphis Depay

38. “I’m attracted to soccer’s capacity for beauty. When well played, the game is a dance with a ball.” – Eduardo Galeano

39. “I see football as an art, and all players are artists. If you are a top artist, the last thing you would do is paint a picture somebody else has already painted.” – Cristiano Ronaldo

40. “To me, soccer is so much more than a ball and two goals. It connects people from all of the corners of the world.” – Anonymous

41. “If you want to be a professional soccer player, if you want to make the national team, you have to do everything possible to work hard. You’ve got to put it number one.” – Carli Lloyd

42. “Some people tell me that professional players are soccer slaves. Well, if this is slavery, give me a life sentence.” – Bobby Charlton

Soccer Quotes That Show the Impact of Sports on Society

43. “Our country has been through difficult experiences in terms of unity. Sport, football, in particular, has the power to help that. It is a special feeling.” – Gareth Southgate

44. “Soccer isn’t the same as Bach or Buddhism. But it is often more deeply felt than religion, and just as much a part of the community’s fabric, a repository of traditions.” – Franklin Foer

45. “Soccer is an art more central to our culture than anything the Arts Council deigns to recognize.” – Germaine Greer

46. “I think there are a lot of things that soccer does in the communities that transcend the soccer field.” – Brandi Chastain

47. “It seems that soccer tournaments create those relationships: people gathered together in pubs and living rooms, a whole country suddenly caring about the same event. A World Cup is the sort of common project that otherwise barely exists in modern societies.” – Simon Kuper

48. “It is often said in soccer that a country’s particular style of play bears the fingerprints of its social and political nature. Thus, the Germans are unfailingly characterized as resourceful and organized, while Brazilians are said to dance with the ball to the free-form, samba rhythms of carnival.” – Jere Longman

49. “Soccer is not about justice. It’s a drama, and criminally wrong decisions against you are part and parcel of that.” – Pete Davies

50. “Sport has the power to inspire and unite people. In Africa, soccer enjoys great popularity and has a particular place in the hearts of people.” – Nelson Mandela

Soccer Quotes to Learn About Teamwork

51. “It makes me very happy when I create goals or score goals myself, but the most important thing is that the team reaches its goal and plays positive football.” – Mesut Özil

53. “Becoming a footballer is only the first half of the silent prayer a kid offers up to the sky or confides to his teacher in a primary school essay. The second part is the name of the team he wants to play for.” – Andrea Pirlo

Soccer Quotes That Are Full of Meaning

Informative Soccer Quotes to Understand the Role of Goalkeepers

57. “Everybody makes mistakes, but when goalkeepers make them, it is costly. That’s the nature of being a goalkeeper.” – Gary Speed

58. “As a goalkeeper, you need to be good at organizing the people in front of you and motivating them. You need to see what’s going on and react to the threats. Just like a good manager in business.” – Peter Shilton

59. “If you’re a goalkeeper, it doesn’t matter what you save the ball with. If you keep it out, it’s not a goal.” – Mark Lawrenson

Funny Soccer Quotes to Cheer You Up

60. “Football is a game in which a handful of fit men run around for one and a half hours watched by millions of people who could really use the exercise.” – Anonymous

61. “Football is a simple game. Twenty-two men chase a ball for ninety minutes, and at the end, the Germans win.” – Gary Lineker

62. “In his life, a man can change wives, political parties or religions, but he cannot change his favorite soccer team.” – Eduardo Galeano

63. “The ball is round, the game lasts 90 minutes, and everything else is just theory.” – Sepp Herberger

Other Soccer Quotes to Honor Your Favorite Players

64. “Failure happens all the time. It happens every day in practice. What makes you better is how you react to it.” – Mia Hamm

65. “Many people say I’m the best women’s soccer player in the world. I don’t think so. And because of that, someday I just might be.” – Mia Hamm

66. “I’ve never scored a goal in my life without getting a pass from someone else.” – Abby Wambach

67. “Every single day I wake up and commit to myself to become a better player.” – Mia Hamm

68. “There is no harm in dreaming of becoming the world’s best player. It is all about trying to be the best. I will keep working hard to achieve it but it is within my capabilities.” – Cristiano Ronaldo

69. “Whenever people say ‘women’s soccer,’ I want to correct them to say ‘soccer.’ Every girl has had their sport diminished because they’re girls.” – Mia Hamm

70. “I think, sometimes, the best training is to rest.” – Cristiano Ronaldo

Do You Think Playing Soccer Will Help You Make Better Decisions in Life?

All of us know how surprising life can be. It throws us numerous challenges that test our character and patience. Through these obstacles, we’re pushed to think about what we should improve on and how we can make better decisions in the future.

Playing soccer is something very similar to living life. We seek to have fun and relax, but at the same time, it also assists us in cultivating ourselves to bloom as better people. The challenges that the sport brings shape us into better individuals who can face every hurdle thrown at us.

Hopefully, the quotes we’ve compiled were able to make you think about the impact of soccer on your attitude and mindset. Remember that every goal needs patience and tenacity so you can move past the challenge. So, go on and keep scoring goals in life!