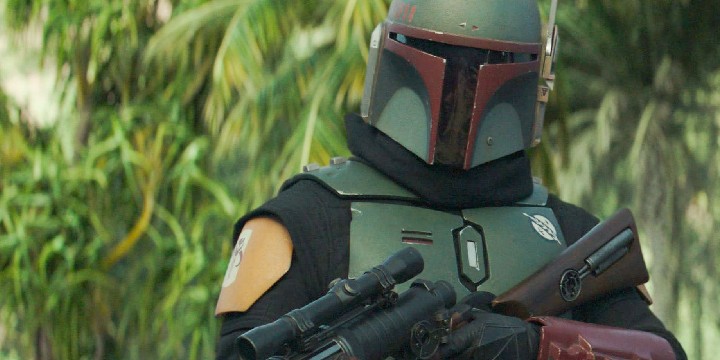 This collection of Boba Fett quotes will show you how one could handle any given situation if you embody control and confidence.

Boba Fett is one of the iconic fictional characters in the series, The Mandalorian, where he plays the role of a bounty hunter.

He is an unaltered clone and an adoptive son of his father, Jango Fett.

And though he seems to be an ally, his origin is actually an anti-hero in the series.

These quotes highlight a lot of Boba Fett’s remarkable, bad-ass, and humorous lines.

Be sure to add this to your must-reads to rev up your day.

And don’t forget to check out these The Mandalorian quotes and Jabba the Hutt quotes.

2. “I’m a simple man making his way through the galaxy—like my father before me.”

3. “Fate sometimes steps in to rescue the wretched.”

7. “Trust is hard among enemies. Perhaps we should return to the battle; perhaps, Han Solo, we should let fly, and once more let fate decide who will survive, as we did when we were young.”

10. “Sometimes, it’s better to think rather than speak.”

13. “It’s the final and only lasting justice. Evil exists; it is intelligence in the service of entropy. When the side of a mountain slides to kill a village, this is not evil, for evil requires intent. Should a sentient being cause that landslide, there is evil; and requires justice as a consequence, so that civilization can exist.”

Boba Fett: “Then wouldn’t I be good?”

25. “I want you to take a look at something. My chain code has been encoded in this armor for 25 years. You see, this is me. Boba Fett. This is my father, Jango Fett.”

27. “I have made contact with the rebels and all is proceeding as you wished, Darth Vader.”

29. “Dad! I think we’re being tracked. Look at the scan screen! Isn’t that a cloaking shadow?”

31. “You are foolish to waste your kindness on this dumb creature. No lower life form is worth going hungry for.”

33. “The sarlacc found me somewhat indigestible.”

37. “You know, I’m going to give you something free. That doesn’t happen very often. Even when it’s just good advice, I usually let other creatures learn by just suffering the consequences of their actions.”

39. “You’re no one! You didn’t earn this armor! You didn’t earn my reputation. You called me a ‘fossil.’ If you were going to be me, you should have learned from this fossil. You’ll never be me. One of these vials contains the antidote. If you have the power to get it before your rocket pack blows up, you may live. You won’t, though. You’re not me.”

43. “This isn’t a spice dream. I can see the imperial cruiser with my own eyes.”

44. “And in a dangerous galaxy, perfection allowed for survival.”

48. “I’m the only bounty hunter that Voss’on’t is really worried about.”

53. “Stop whining. Before you really get me irritated.”

54. “I’ll make it clear to both sides that there’s no official involvement in their dispute. But if any of you want to get yourselves killed, it’s your call.”

56. “Because I have a sharpshooter up on that ridge with a locked scope that will unload by the time my body hits the ground.”

Boba Fett Quotes on Being a Man With Principles

60. “Sex between those not married is immoral.”

61. “There is no greater good than justice; and only if law serves justice is it a good law. It is said correctly that law exists not for the just but for the unjust, for the just carry the law in their hearts, and do not need to call it from afar.”

Steadfast Boba Fett Quotes Showing His Will to Succeed

67. “Nothing stops the Mandalorian warrior!”

Boba Fett Quotes About His Concern for Others

75. “I said stay, friend. Luke trusted me and I’m your only chance of getting out of here alive.”

76. “I am sorry for the deaths of the innocent. But that happens in a war, Leia Organa. The innocent die in wars, and your side should not have started this one.”

Entertaining Boba Quotes That Will Make You Titter

79. “Medrit, I want to send Han Solo a gift—proper beskar crushgaunts, so he can throttle the life out of his vermin spawn. And maybe a couple of armor plates and a small blade.”

82. “Well, if that isn’t the quacta calling the stifling slimy. Easy there, little one.”

Boba Fett: “I was aiming for the other one.”

85. “I didn’t mean she was going to shoot you. My friend’s locked onto that little companion of yours up on the henge.”

Boba Fett Quotes on the Empire and the Galaxy

88. “They are here, friend. And growing more powerful.”

89. “I know this sleeping virus the Empire uses on its enemies. They have a remedy for it in the city.”

91. “You can’t rule Mandalorians. You just make sensible suggestions they want to follow.”

Did These Boba Fett Quotes Catch Your Interest?

Boba Fett is known for his loyalty to the empire, but he had a traumatic past that turned him into being a fearsome character in the series. Just like any normal human being, it became his influence.

Traumatic pasts play a great role in molding a person’s character. And growing up, Boba Fett built a character that would help him survive. He also tends to handle every situation in an invigorating way which makes him look cool and valorous.

But these quotes not only show how bad-ass Boba Fett is. He also had iconic lines which are relatable, motivational, and entertaining.

Which Boba Fett quotes do you think was the coolest? Is he one of your favorite characters? We want to hear it from you in the comments below!