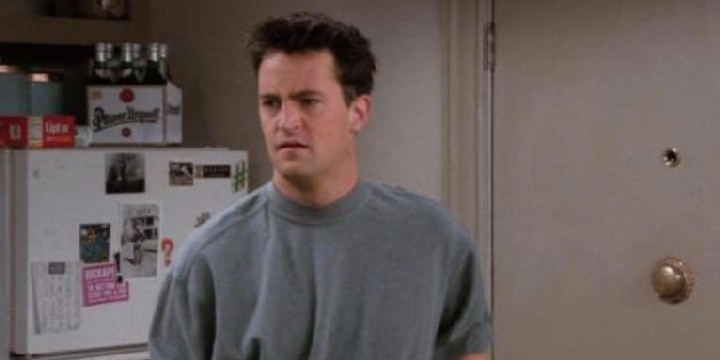 Chandler Bing is one of the six main characters in Friends. He is portrayed by Matthew Perry—an actor known for his witty and sarcastic sense of humor.

Throughout the show’s many seasons, we see Chandler mature from an awkward adolescent to a loving and supportive husband and father.

Every Friends fan has a favorite character, but it is universally agreed that Chandler is the funniest one of the bunch.

If you need any proof, just look at the staggering list of quotes and lines he delivers on the show.

And don’t forget to check out these Friends TV Show quotes and Joey Tribbiani quotes.

1. “I tend to keep talking until somebody stops me.”

2. “It’s always better to lie than to have a complicated discussion.”

4. “I’m not great at giving advice. Can I interest you in a sarcastic comment?”

5. “What must it be like not to be crippled by fear and self-loathing?”

8. “We swallow our feelings, even if it means we’re unhappy forever. Sounds good?”

9. “When I was younger, I started using humor as a defense mechanism.”

12. “You’ll be carrying their baby and giving them a Sony Playstation?”

13. “So it seems like this internet thing is here to stay.”

14. “Why yes Ross, pressing my third nipple. It opens the delivery entrance to the magical land of Narnia.”

15. “I am glad we are having a rehearsal dinner. I rarely practice my meals before I eat.”

17. “I’m a gym member. I try to go four times a week, but I’ve missed the last twelve hundred times.”

Chandler Bing: “Okay, but you’ll have to give it back when I get a job. Of course, by then, ties will be obsolete and we’ll all be wearing silver jumpsuits.”

23. “When I first meet somebody it’s usually panic, anxiety, and a great deal of sweating.”

Chandler Bing: “Because you’ve only known her for six weeks. I’ve got a carton of milk in my refrigerator I’ve had a longer relationship with.”

Chandler Bing: “Are we greeting each other this way now? ‘Cause I like that.”

27. “I’m hopeless and awkward and desperate for love!”

Chandler Bing: “No, I want a flabby gut and saggy man-breasts.”

33. Ross Geller: “I went to that tanning place your wife suggested.”

Chandler Bing: “Was that place the sun?”

Chandler Bing: “And yet I never run into Beyonce.”

Chandler Bing: “How do you find clothes that fit?”

38. “You have to stop the Q-Tip when there’s resistance!”

Chandler Bing: “Joey ate my last stick of gum, so I killed him. Do you think that was wrong?”

40. “Hey, you know, I have had it with you guys and your ‘cancer’ and your ’emphysema’ and your ‘heart disease.’ The bottom line is smoking is cool and you know it.”

41. Ross Geller: “That guy Mark from Bloomingdale’s. She thinks he’s just being nice to her, but I know he really wants to sleep with her.”

44. Joey Tribbiani: “I really need to organize my thoughts.”

45. “If you’re not careful, you might not get married at all this year.”

48. “Because, Phoebe, sometimes after you sleep with someone you have to kill a fish.”

49. Chandler Bing: “An 80-foot inflatable dog loose over the city? How often does that happen?”

50. Phoebe Buffay: “For your information, this happens to be a pain like no man will ever experience.”

Chandler Bing: “I don’t think you can make that statement unless you’ve been kicked in the area, God only meant to be treated nicely.”

52. “I think for us, kissing is pretty much like an opening act. I mean, it’s like the stand-up comedian you have to sit through before Pink Floyd comes out.”

53. “Should I use my invisibility to fight crime, or for evil?”

54. Monica Geller: “And I assume Chandler, you’re still boycotting all the pilgrim holidays.”

Chandler Bing: “Yes every single one of them.”

56. Monica Geller: “Unbelievable! Why is your family Scottish?”

Chandler Bing: “Why is your family Ross?”

Chandler Bing: “So how many cameras are actually on you?”

59. “So, I figure I’ll be a crazy man with a snake, y’know? Crazy Snake Man. And I’ll get more snakes, call them my babies, kids will walk past my place, they will run. ‘Run away from Crazy Snake Man,’ they’ll shout!”

Chandler Bing: “No. Interestingly enough her leaf blower picked up.”

Chandler Bing: “Before or after you’re executed by your own troops?”

64. Joey Tribbiani: “Okay, ducks are heads, because ducks have heads.”

Chandler Bing: “What kind of scary clowns came to your birthday?”

65. “I think I can safely say that we all have family issues, work, and are sick.”

66. Ross Geller: “Okay, look. You don’t have to get married. We can just go home and take a shower. That’s not so scary is it?”

Chandler Bing: “Depends on what you mean by ‘we.’”

Chandler Bing: “Dehydrated Japanese noodles under fluorescent lights—does it get better than this?”

68. “So great things are happening at work and in your personal life!”

Chandler Bing: “Why, do you have a lecture?”

70. Ross Geller: “She’s got to go back to London. But, you know what? I’ve been prepared for this from the start. We both knew we had two weeks together and then that’s it.”

Joey Tribbiani: “That’s what all my relationships are like.”

Chandler Bing: “Yes, but in Ross’ case, they both know in two weeks that’s it.”

Do You Wish You Had a Friend Like Chandler Bing?

Every group has that one funny guy. However, if you have a friend like Chandler, you are incredibly fortunate because though he tries to be funny, he knows how to support and encourage you. His natural wit and humor are sure to brighten your day, no matter how bad it originally was!

Chandler Bing’s jokes can be brutally honest and borderline offensive. However, there are many valuable lessons we can take away from them. For one, he emphasized the importance of accepting your friends’ flaws and loving them despite their differences.

He also made us understand that being awkward is okay. Chandler does not attempt to conceal this trait, especially with his friends. This quality of his is so relatable that many fans came to love him even more!

No doubt, Chandler’s presence brings lightness and joy to every corner of the room. So, whenever you need a pick-me-up, feel free to reread the quotes in this list.

Which Chandler Bing quotes made you smile? Do you have any more quotes to share? Please, leave a comment down below.