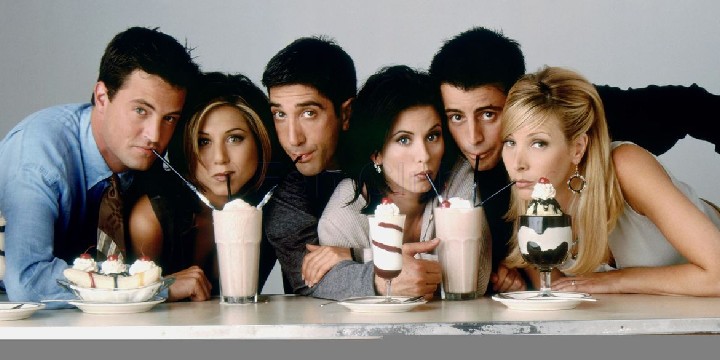 No matter what generation you belong to, we’re sure you’ll learn a bunch of insights from this collection of the top 70 Friends TV show quotes.

Friends is a ‘90s American sitcom that tackles just about everything we go through in life. From new jobs, relationships, heartbreaks, children, food, and more—the show has it all!

These topics are all given life through six friends: Joey, Chandler, Ross, Monica, Rachel, and Phoebe.

All sorts of drama and everyday issues are tackled in Friends. And, because of that, it’s undoubtedly a classic that transcends the test of time.

In fact, even though Gen Xers are the ones who actually grew up with it, younger generations still stream and keep the influence of the sitcom alive.

We’re lucky to have a show like Friends to keep us on our toes—constantly learning about life, love, and everything in between.

No doubt, it’s a show rich with insights and meaningful lessons.

If this piqued your curiosity, scroll through to the end to find some of the best quotes from all seasons.

And make sure to check out these Chandler Bing quotes and Phoebe Buffay quotes.

2. “I’m not great at giving advice. Can I interest you in a sarcastic comment?” – Chandler Bing

3. “Why don’t you stop worrying about sounding smart and just be yourself?” – Monica Geller

5. “Welcome to the real world. It sucks. You’re gonna love it.” – Monica Geller

6. “A promise between friends means never having to give a reason.” – Phoebe Buffay

7. “You’re not alone. We don’t know where we’re going! You just gotta figure at some point it’s all gonna come together.” – Monica Geller

8. “Boyfriends and girlfriends will come and go, but this is for life.” – Phoebe Buffay

9. “It’s okay. Sometimes things don’t work out the way you thought they would.” – Rachel Green

11. “These are just feelings. They’ll go away.” – Joey Tribbiani

14. “I’m hopeless and awkward and desperate for love!” – Chandler Bing

15. “Your collective dating record reads like a who’s who of human crap.” – Phoebe Buffay

16. “I’m gonna love you so much that no woman is ever gonna be good enough for you.” – Monica Geller

Classic Friends TV Show Quotes to Keep In Your Heart

22. Rachel Green: “Go tell him he’s cute. What’s the worst that could happen?”

Monica Geller: “He could hear me.”

Rachel Green: “Are you kidding? I’m trained for nothing!”

24. Janice Litman-Goralnik: “What a small world.”

Chandler Bing: “And yet I never run into Beyoncé.”

Funny Friends TV Show Quotes That Will Have You Laughing

25. “You don’t own a TV? What’s all your furniture pointed at?” – Joey Tribbiani

29. Monica Geller: “You can’t live off your parents your whole life.”

Rachel Green: “I know that, that’s why I was getting married.”

Phoebe Buffay: “I don’t even have a pla.”

31. “Over the line? You’re so far past the line that you can’t even see the line! The line is a dot to you!” – Joey Tribbiani

32. “You can’t just give up. Is that what a dinosaur would do?” – Joey Tribbiani

34. “Well, the fridge broke, so I had to eat everything.” – Joey Tribbiani

37. “I can handle this. ‘Handle’ is my middle name. Actually, ‘Handle’ is the middle of my first name.” – Chandler Bing

38. “When I first meet somebody it’s usually panic, anxiety, and a great deal of sweating.” – Chandler Bing

39. “What must it be like not to be crippled by fear and self-loathing?” – Chandler Bing

40. “I tell you, when I actually die, some people are gonna get seriously haunted.” – Ross Geller

42. “Unagi is a state of total awareness. Only by achieving true Unagi can you be prepared for any danger that may befall you.” – Ross Geller

44. “She’s your lobster. It’s a known fact that lobsters fall in love and mate for life.” – Phoebe Buffay

46. “I’m a pacifist. But when the revolution comes, I’ll destroy all of you.” – Phoebe Buffay

47. “Didn’t you ever run so fast you thought your legs were gonna fall off, you know, like when you were running toward the swings or running away from Satan?” – Phoebe Buffay

48. “Everybody looks so happy. I hate that.” – Phoebe Buffay

49. “You love divorce so much, you’re probably gonna marry it—and then it won’t work out, so you’re gonna have to divorce it.” – Phoebe Buffay

52. “You know what? I just shouldn’t be allowed to make decisions anymore.” – Rachel Green

54. “Why can’t parents just stay parents? You know? Why do they have to become people?” – Rachel Green

55. “Oh my God. I’ve become my father. I’ve been trying so hard not to become my mother, I didn’t see this coming.” – Rachel Green

57. “Now, I need you to be careful and efficient. And remember, if I am harsh with you, it is only because you’re doing it wrong.” – Monica Geller

58. “Is it me? Is it like I have some sort of beacon that only dogs and men with severe emotional problems can hear?” – Monica Geller

59. “I’ve got this uncontrollable need to please people.” – Monica Geller

60. “Guys can fake it? Unbelievable! The one thing that’s ours!” – Monica Geller

61. “Phoebe, you are so beautiful. You’re so kind. You’re so generous. You’re so wonderfully weird. Everyday with you is an adventure.” – Mike Hannigan

66. “The way I feel about you, it’s like I finally understand what Lionel Richie has been singing about.” – Janice Litman-Goralnik

More Friends TV Show Quotes for All the Romantics

67. “Chandler, for so long I wondered if I would ever find my prince, my soul mate. Then three years ago, at another wedding, I turned to a friend for comfort. And instead, I found everything that I’d ever been looking for my whole life. And now here we are with our future before us and I only want to spend it with you, my prince, my soulmate, my friend.” – Monica Geller

68. “Chandler, she wants you for the rest of her life. We look at you and we see you together, and it just—it fits, you know? And you just know it’s gonna last forever.” – Joey Tribbiani

69. “You’re not easygoing, but you’re passionate, and that’s good. And when you get upset about the little things, I think that I’m pretty good about making you feel better about that. And that’s good, too. So, they can say that you’re high-maintenance, but it’s okay because I like maintaining you.” – Chandler Bing

70. “What do you say I go over there and tell her how much I like her? No, no, it’ll be good. I can tell her how much I’ve been thinking of her. That I haven’t stopped thinking about her since the moment we met. That I’m so fantastically over the top, want-to-slit-my-own-throat in love with her that for every minute of every hour of every day I can’t believe my own damn bad luck that you met her first!” – Chandler Bing

Did This Collection Help You See the Value of Having True Friends?

Life is filled with roadblocks. If we don’t have anyone to share our struggles with, it can get pretty dull and demotivating. This is why having friends to back you up is essential.

More than a decade since its first episode, Friends continues to make us laugh and cry with all the relatable experiences shown through the characters. We saw how the group of friends grew up and matured, and with it, we also saw how they overcame many challenges together.

Friendship is a beautiful thing that adds color and joy to our lives. It makes our life a wonderful mix of different opinions and perspectives. And, ultimately, true friends bring out our best selves.

So, if you’ve found your besties like Joey, Chandler, Ross, Monica, Rachel, and Phoebe did, then hold on to them. They are the ones who will guide you along as you experience life and the ups and downs of love. Take their bond as inspiration to keep it real and build a friendship that’ll stand the test of time!

Who’s your favorite character? What lessons have you learned today? Please, share your thoughts below.