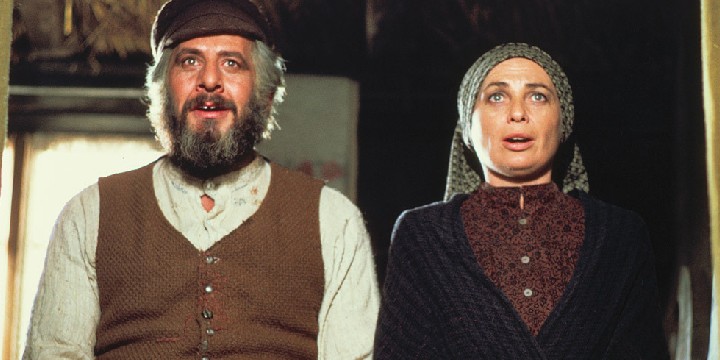 Times have changed and are continuing to change, so read these Fiddler on the Roof quotes to better understand that fact.

Fiddler on the Roof tells the story of the conflicts plaguing a Jewish family in Russia. On the one hand, the father, Tevye, had a firm hold on tradition and culture. On the other, his children have a completely different view of the world and how to approach change.

This makes up for an engaging plot that allows us to question whether or not we’re moving in the right direction. Does one have to let go of traditions to progress completely? Is change really such a bad thing?

These are all questions we get to answer and understand in Fiddler on the Roof. If you’re interested, read through our complete list of quotes below.

And don’t forget to check out these In The Heights quotes and Grease quotes.

Best Fiddler on the Roof Quotes

1. “You may ask, ‘How did this tradition get started?’ I’ll tell you! I don’t know. But it’s a tradition. And because of our traditions, every one of us knows who he is and what God expects him to do.” – Tevye

Tevye: “May the Lord smite me with it. And may I never recover!”

Motel Kamzoil: “That’s true, Reb Tevye, but even a poor tailor is entitled to some happiness!”

4. “Traditions, traditions. Without our traditions, our lives would be as shaky as—as—as a fiddler—on the roof!” – Tevye

5. “You made many many poor people. I realize of course it’s no shame to be poor, but it’s no great honor either. Now, what would be so terrible if I had a small fortune?” – Tevye

6. “Sometimes I think, when it gets too quiet up there, You say to Yourself, ‘What kind of mischief can I play on My friend Tevye?’” – Tevye

Tevye: “Ah. Well, as King David said, ‘I am slow of speech and slow of tongue.’”

Mendel: “That was also Moses.”

Tevye: “For a man who was slow of tongue, he talked a lot.”

Tevye: “Very good. That way the whole world will be blind and toothless.”

9. “A fiddler on the roof. Sounds crazy, no? But here, in our little village of Anatevka, you might say every one of us is a fiddler on the roof trying to scratch out a pleasant, simple tune without breaking his neck. It isn’t easy. You may ask, ‘Why do we stay up there if it’s so dangerous?’ Well, we stay because Anatevka is our home. And how do we keep our balance? That I can tell you in one word: tradition!” – Tevye

10. Hodel: “Papa, God alone knows when we shall see each other again.”

Tevye: “Then we will leave it in His hands.”

Funny Fiddler on the Roof Quotes to Remember

12. “Dear God. Did you have to send me news like that—today of all days? I know, I know we are the chosen people. But once in a while, can’t you choose someone else?” – Tevye

Mendel: “Where does the book say that?”

Tevye: “Well, it doesn’t say that exactly, but somewhere there is something about a chicken.”

14. Tevye: “In the middle of the dream, in walks your grandmother Tzeitel. May she rest in peace.”

Golde: “Grandmother Tzeitel? How did she look?”

15. Perchik: “Your daughter has a quick and witty tongue.”

Golde: “The Good Book can wait; it’s time for Sabbath.”

Tevye: “The tongue she gets from her mother.”

16. “Anyway, Motel and Tzeitel have been married for some time now. They work very hard, and they’re as poor as squirrels in winter. But, they’re so happy, they don’t know how miserable they are.” – Tevye

Fiddler on the Roof Quotes for You to Reflect On

17. “Patience, woman, patience. As the Good Book says, good news will stay, and bad news will refuse to leave.” – Tevye

18. “If the rich could hire others to die for them we, the poor, would all make a nice living.” – Mordcha

19. Motel: “Rabbi, we’ve been waiting for the Messiah all our lives. Wouldn’t now be a good time for him to come?”

Rabbi: “I guess we’ll have to wait someplace else.”

20. Tevye: “Chaveleh, I would be much happier if you remained friends from a distance. You must not forget who you are and who that man is.”

Tevye: “Of course. All creatures on Earth have a name.”

Chava: “Fyedka is not a creature, Papa. Fyedka is a man!”

Tevye: “Who says he isn’t? It’s just that he’s a different kind of man. As the Good Book says, each shall seek his own kind. In other words, a bird may love a fish, but where would they build a home together?”

Chava: “The world is changing, Papa!”

21. Perchik: “In this world, it is the rich who are the criminals. Someday their wealth will be ours.”

Constable: “That’s what I like about you, Tevye. You’re always joking.”

24. Tevye: “And until your golden day comes, Reb Perchik, how will you live?”

Perchik: “By giving lessons to children. Do you have any children?”

Tevye: “I have five daughters.”

Perchik: “Girls can learn too; girls are people.”

Golde: “A poor girl without a dowry can’t be so particular. You want hair? Marry a monkey.”

What’s Your Opinion on Change and How It Affects Life?

We face change from our very first breath to our last. It’s the only way to progress and improve our status in life. So, why is Tevye in Fiddler on the Roof so against it?

From one perspective, it might be because he believes their current traditions and way of life are the things that make him who he is. By changing even the tiniest aspect of it, he also loses his identity.

We can also say that Tevye’s afraid of losing his family. His unwillingness to change or bend is his way of controlling his children’s life. It’s not bad for a parent to steer children into a particular path, but if it goes out of hand and the parent doesn’t let his children decide for themselves, there’s something wrong.

Parents, rules, traditions, and culture are all things that guide children. However, they must decide and act independently when they’ve grown into adults. Following that, they are also the ones who are accountable for the consequences of their actions, not their parents.

With that, we hope the quotes we’ve included in the list were able to give you a deeper understanding of what Fiddler on the Roof is all about. Make sure you save this collection in your bookmarks whenever you need advice on dealing with life’s inevitable changes!