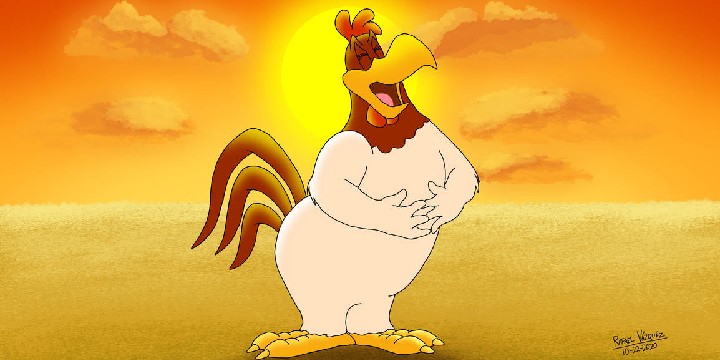 We’ve gathered our favorite Foghorn Leghorn quotes that will take you back to your childhood days of watching Looney Tunes!

This character is one of those classics that you’ll always want to see more of. So what are you waiting for? Read some of his best and funniest lines through our collection!

And don’t forget to check out these Yosemite Sam quotes and Marvin the Martian quotes.

1. “That dog is as subtle as a hand grenade in a barrel of oatmeal.”

2. “Gal reminds me of the highway between Forth Worth and Dallas—no curves.”

4. “This boy’s more mixed up than a feather in a whirlwind.”

5. “Now who’s, I say, who’s responsible for this unwarranted attack on my person.”

8. “His muscles are as soggy as a used teabag.”

15. “Kid don’t quit talkin’ so much he’ll get his tongue sunburned.”

27. “That dog, I say that dog is lower than a snake full of buckshot.”

28. “It’s sure, I say it’s sure quiet around here, you could hear a caterpillar sneakin’ across a moss bed in tennis shoes.”

30. “For I say fortunately I always carry a spare set of feathers.”

32. “Clunk enough people and we’ll have a nation of lump heads.”

34. “This is gonna cause more confusion than a mouse in a burlesque show!”

37. “That’s the trouble with that fool dog, always shootin’ his mouth off.”

38. “Now, that, I say, that’s no way for a kid to be wastin’ his time, readin’ that long-haired gobbledygook.”

41. “That boy’s making more noise than a couple of skeletons throwin’ a fit on a tin roof!”

45. “She remi—I say, she reminds me of Paul Revere’s ride, a little light in the belfry.”

47. “That, I say, that dog’s busier than a centipede at a toe countin’ contest.”

Foghorn Leghorn Quotes to Remind You of Roosters and Chickens

52. “Fortunately, I keep my feathers numbered, for, for just such an emergency.”

54. “Now, cut that out boy, or I’ll spank you where the feathers are thinnest.”

57. “As senior rooster ’round here, it’s my duty, and my pleasure, to instruct junior roosters in the ancient art of roostery.”

59. “You see, Henery, your mother and I are outcasts. Hated and hunted because of what we are—chicken hawks. And you—you, Henery—you’re a chicken hawk too. And like all chicken hawks, you crave to eat—a chicken.”

Foghorn Leghorn Quotes That’ll Make You Reminisce About the Show

62. “Hey you little boy! Make your smart enough to face this world.”

63. “Boy! O, boy! Keep your extra set of feathers, always with you, for contingencies.”

65. “Boy! I say, my boy! Think before you utter something wrong in front of the others and hurt them with your words!”

66. “Boy! I say, boy! Stay optimistic and wise rather that being dumb!”

67. “Hey little chick! Do not give up once if you fall down! Get up and face the challenges and keep trying until you succeed.”

69. “Boy! I say listen my dear boy! Don’t take what others say in the negative manner, be positive and spread positivity around you!”

70. “Boy I say, boy! Never feel weak, because your father is next beside you!”

72. “There’s something a little yeeeee about a boy that doesn’t like baseball.”

74. “I—I know what you’re gonna say, son. When two halves are gone there’s nuthin’ left, and you’re right. It’s a little ol’ worm who wasn’t there. Two nuthin’s is nuthin’. That’s mathematics son. You can argue with me but you can’t argue with the figures. Two half nuthin’s is a whole nuthin’.”

76. “When the little woman comes home and finds the egg gone, woo! What she will do to me.”

77. “Any of this getting through that little old bluebonnet of yours.”

82. “Speakin’ of figures, I put two n’ two together and come up with a four-legged smart-aleck mutt!”

84. “Boy, I say, boy, pay close attention to me, ’cause you’re a burrito short of a combination plate.”

85. “Looks like our fine feathered friend is heading into Venician territory—of Venice, Italy, that is.”

86. “Looka here son, I say, son, did you see that hawk after those hens? He scared them, that Rhode Island Red turned White then Blue. Rhode Island. Red, White, and Blue—that’s a joke son. A flag-waver. You’re built too low. Fast ones go over your head.”

90. “Now let me know when I come to something that interests you.”

91. “You got a hole in your glub. I keep pitching them and you keep missing them. You gotta keep your eye on the ball. Eye. Ball. Eyeball.”

95. “Well, you’re going about it the wrong way, sister. You don’t bat ’em on the bean with a rolling pin. That comes later.”

97. “You just know I’m gonna do something about this.”

99. “Fortunately, I always keep a spare in my locker.”

Did These Foghorn Leghorn Quotes Bring Back Memories of Your Childhood?

Foghorn Leghorn is one of the main characters in Looney Tunes. He is well-known for his practical jokes about the other characters in the series.

Aside from that, this tall rooster is known for his loud voice. Surprisingly, Mel Blanc was the man behind the iconic southern voice of Foghorn Leghorn.

The way he talks is one-of-a-kind, which is why there have been so many good Foghorn Leghorn quotes over the years. We hope this collection was able to brighten your day in some way!

Which Foghorn Leghorn quotes are your favorites? Leave a comment below.