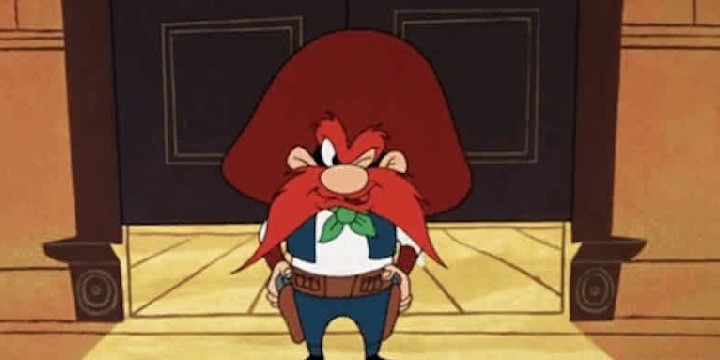 You will definitely feel strong after reading these 130 Yosemite Sam quotes that demonstrate his aggressive and brave personality.

Yosemite Sam is a cartoon character from the Looney Tunes. He is portrayed as a ferocious, short-tempered cowboy, and Bugs’ toughest antagonist.

Are you looking forward to meeting him?

As you read this collection, you will encounter new emotions and feelings. Enjoy!

And make sure to check out these Marvin the Martian quotes and Foghorn Leghorn quotes.

3. “I’m the meanest, roughest, toughest hombre that’s ever crossed the Rio Grande, and I ain’t no namby-bamby!”

4. “Stranger, you just yupped yourself into a hole in the head!”

13. “I’m no doc, ya flea-bitten varmint. I’m Riff-Raff Sam—the riffiest riff that ever riffed a raff!”

22. “Come back here you muley-headed maverick.”

23. “Avast there! Come back here, you barnacle-bitten swab.”

27. “Blast your scuppers, ya barnacle-bitten landlubber.”

30. “Prepare to defend yourself rabbit, ’cause I’m a bordin’ your ship.”

Yosemite Sam Quotes About Himself

32. “That’s right, Yosemite Sam. The roughest, toughest, hombre that ever locked horns with a rabbit.”

37. “I am the blood thirstiest, shoot-em-firstiest, doggone worstiest buccaneer that’s ever sailed the Spanish Main! Now gimme them jewels! Them’s my treasure, and I’m a-buryin’ them where no one’ll know where they’re at but me.”

Yosemite Sam Quotes and Lines on Being Rough

39. “Blast his scuppers, I’ll slice his liver out for this!”

42. “Oooo, I’d like to lay my hands on the lily-livered swab is writ that forgery.”

48. “Ya doggone idgit galoot, you’ll blow the ship to smithereenies!”

50. “Oooo, that dirty bilge rat has be-fouled my good name.”

52. “Consider yourself as lucky because you are getting another chance from me to draw a gun.”

64. “The first dang Yankee that steps out of that dugout, gets his head blasted off!”

70. “Come with me to the Casbah. We’ll make beautiful music together.”

74. “If God didn’t want us to have guns, he wouldn’t have given us trigger fingers!”

75. “Lay down your arms and step forward, Yankee.”

76. “Blast your ornery hide! If ya does that just once more, I ain’t a-going after it.”

78. “Ya double crossin’ rabbit, ya cut down your chances, I’m only goin’ count two, and then blast ya!”

79. “Oooo! Belay there you long-eared galoot, get aloft and furl the tatter-sole top gallants before I keel-hauls ya!”

Insulting Quotes and Lines From Yosemite Sam to Annoy You

85. “Ya crazy idgit bedraggled dragon, I warned ya about lettin’ your fire get low, now ya caught cold.”

90. “Aha! There ya are ya buck-toothed barnacle, say your prayers.”

91. “Any one-a-you lily-livered, bow-legged varmints care to slap leather with me?”

93. “Too late, duck, I already wished for a pirate ship. After I sinks a certain pesky rabbit, I’ll come back and pick.”

97. “No more gentleman’s stuff, from now on, you fights my way dirty!”

99. “Twenty years tryin’, and ya missed me again. Ya shovel nosed mackrel.”

100. “Ooh I’ll get that fir bearin’ critter, even if I has to chase ’em through every state in the union.”

101. “That dame’s taking everything, but the kitchen sink.”

102. “When I get that money, I’ll buy the old ladies home and kick them out. I’ll tear down the orphanage and fire the police department.”

104. “The first one tries to get outta here to warn that rabbit, gets his hide blown off!”

107. “What’s up? Why you ornery, fur-bearin’ critter, this here’s one of them there train robbery hold ups.”

117. “I smells carrots a-cookin’, and where there’s carrots, there’s rabbits.”

118. “Ya wanna know what I think of Alex? Well I think he’s pathetic! I mean, that’s y’all’s protagonist? There’s no art to that character! What obstacle did he overcome? What was his emotional journey? In fact, only thing that’s more pathetic than Alex is this book club! Now get out! Get! Get! Don’t forget your books! Yosemite Sam is back! Yee-haw!”

120. “You got us stuck on this stupid rock, you good-for-nothin’ feline! You no good rassin-frassin kitty cat! Get back here and take the fur! Come here, boy!”

122. “You’ve been getting mighty bossy since we started this galdurn alliance.”

123. “If brains were dynamite, you wouldn’t have enough to blow your nose.”

124. “Pickins is mighty slim round here. Hardly no reward for a day’s work.”

126. “The only two things a pirate’ll run for is money and public office.”

130. “Ooh! I’ll shiver his timbers and I’ll baton his hatch and keel-haul his kuppers!”

Do You Have a Short Temper?

Having a short temper is normal, especially when confronted with unfamiliar scenarios. Other people are unable to control their temper, resulting in more complicated outcomes.

Yosemite Sam is very aggressive when he loses his temper. He has a stronger accent, and a commanding voice.

Before taking any action, we should always think it through a hundred times. Never do anything that you will end up regretting.

Which of these quotes is your favorite? Is Yosemite Sam your favorite Looney Tunes character? Please, leave your response in the comments section!