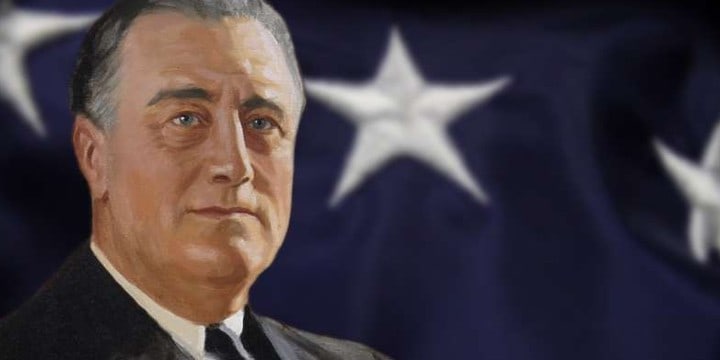 There are surely many things to learn from this collection of Franklin D. Roosevelt quotes.

So, if you’re in need for some tips and pieces of advice to be a successful leader, then this collection might just fit the bill.

In this list, we’re featuring 110 of the most famous quotes from the 32nd president of the United States—someone who helped the country fight through the Second World War and get through the Great Depression.

And don’t forget to check out these Richard Nixon quotes and Dwight Eisenhower quotes.

1. “Let us move forward with strong and active faith.”

3. “In this war, we know books are weapons; and it is a part of your dedication, always, to make them weapons for man’s freedom.”

4. “Democracy cannot succeed unless those who express their choice are prepared to choose wisely.”

6. “The only thing we have to fear is fear itself.”

7. “That, in its essence, is fascism—ownership of government by an individual, by a group, or any controlling private power.”

8. “Remember—remember always—that all of us, and you and I especially, are descended from immigrants and revolutionists.”

9. “I’m not the smartest fellow in the world, but I can sure pick smart colleagues.”

11. “Books can not be killed by fire. People die, but books never die.”

12. “We cannot always build the future for our youth, but we can build our youth for the future.”

13. “The liberty of a democracy is not safe if the people tolerate the growth of private power to a point where it becomes stronger than the democratic state itself.”

14. “A nation that destroys its soils destroys itself. Forests are the lungs of our land—purifying the air and giving fresh strength to our people.”

15. “The real safeguard of democracy, therefore, is education.”

18. “Courage is not the absence of fear, but rather the assessment that something else is more important than fear.”

19. “The only limit to our realization of tomorrow will be our doubts of today.”

20. “Happiness lies in the joy of achievement and the thrill of creative effort.”

21. “Happiness is not in the mere possession of money.”

22. “There are many ways of going forward, but only one way of standing still.”

23. “A conservative is a man with two perfectly good legs who, however, has never learned to walk forward.”

24. “Our strength is our unity of purpose—to that high concept, there can be no end save victory.”

25. “It isn’t sufficient just to want—you’ve got to ask yourself what you are going to do to get the things you want.”

26. “Never before in all our history have these forces been so united against one candidate as they stand today. They are unanimous in their hate for me—and I welcome their hatred.”

27. “The truth is found when men and women are free to pursue it.”

28. “Competition has been shown to be useful up to a certain point and no further, but cooperation, which is the thing we must strive for today, begins where competition leaves off.”

29. “In the truest sense, freedom cannot be bestowed; it must be achieved.”

30. “Those who have long enjoyed such privileges as we enjoy, forget in time that men have died to win them.”

31. “The only sure bulwark of continuing liberty is a government strong enough to protect the interests of the people, and a people strong enough and well enough informed to maintain its sovereign control over the government.”

32. “I have an unshaken conviction that democracy can never be undermined if we maintain our library resources and a national intelligence capable of utilizing them.”

34. “We are steering a steady course toward economic oligarchy, if we are not there already.”

36. “Some people can never understand that you have to wait, even for the best of things, until the right time comes.”

37. “Never underestimate a man who overestimates himself.”

39. “The first responsibility for the alleviation of poverty and distress, and for the care of the victims of the depression, rests upon the locality—its individuals, organizations, and government.”

40. “If you treat people right, they will treat you right—ninety percent of the time.”

42. “We have always known that heedless self interest was bad morals. We now know that it is bad economics.”

43. “Human kindness has never weakened the stamina or softened the fiber of a free people.”

44. “A Reactionary is a somnambulist walking backwards.”

47. “They have sold their heritage of freedom for the illusion of a living. They have yielded their democracy.”

48. “A Liberal is a man who uses his legs and his hands at the behest—at the command—of his head.”

50. “The parks stand as the outward symbol of the great human principle.”

51. “A Radical is a man with both feet firmly planted in the air.”

52. “Taxes, after all, are dues that we pay for the privileges of membership in an organized society.”

53. “I sometimes think that the saving grace of America lies in the fact that the overwhelming majority of Americans are possessed of two great qualities—a sense of humor and a sense of proportion.”

54. “We and all others who believe in freedom as deeply as we do, would rather die on our feet than live on our knees.”

55. “Today, we are faced with the pre-eminent fact that if civilization is to survive, we must cultivate the science of human relationships—the ability of all peoples of all kins to live together and to work together in the same world at peace.”

56. “The essence of our struggle is that men shall be free.”

57. “We have faith that future generations will know that here, in the middle of the twentieth century, there came a time when men of good will found a way to unite, and produce, and fight to destroy the forces of ignorance, and intolerance, and slavery, and war.”

58. “This generation of Americans has a rendezvous with destiny. In this world of ours, in other lands, there are some people, who, in times past, have lived and fought for freedom, and seem to have grown too weary to carry on the fight.”

60. “A smooth sea never made a skilled sailor.”

61. “It is common sense to take a method and try it. If it fails, admit it frankly and try another. But above all, try something.”

62. “Books, like ships, have the toughest armor, the longest cruising range, and mount the most powerful guns.”

64. “Repetition does not transform a lie into a truth.”

68. “We are fighting to save a great and precious form of government for ourselves and for the world.”

69. “People who are hungry and out of a job are the stuff of which dictatorships are made.”

72. “There is nothing so American as our national parks. The scenery and the wildlife are native. The fundamental idea behind the parks is native.”

74. “For out of this modern civilization, economic royalists carved new dynasties. New kingdoms were built upon concentration of control over material things.”

75. “I believe in my heart that only our success can stir their ancient hope.”

76. “They begin to know that here in America, we are waging a war against want, and destitution, and economic demoralization. It is more than that; it is a war for the survival of democracy.”

78. “We have always held to the hope, the belief, the conviction that there is a better life—a better world, beyond the horizon.”

79. “Hitler built a fortress around Europe, but he forgot to put a roof on it.”

80. “Presidents are selected, not elected.”

82. “Our support goes to those who struggle to gain those rights and keep them.”

83. “Among us today, a concentration of private power without equal in history is growing.”

84. “In these days of difficulty, we Americans everywhere must and shall choose the path of social justice—the path of faith, the path of hope, and the path of love toward our fellow man.”

85. “We had to struggle with the old enemies of peace—business and financial monopoly, speculation, reckless banking, class antagonism, sectionalism, war profiteering.”

87. “They had begun to consider the government of the United States as a mere appendage to their own affairs.”

89. “No man can occupy the office of President without realizing that he is President of all the people.”

91. “The real truth of the matter is, as you and I know, that a financial element in the large centers has owned the government of the U.S. since the days of Andrew Jackson.”

92. “There should be no bitterness or hate where the sole thought is the welfare of the United States of America.”

93. “It is, in brief, that the country belongs to the people—that it is in process of making for the enrichment of the lives of all of us.”

94. “For nearly four years, you have had an administration which instead of twirling its thumbs, has rolled up its sleeves. We will keep our sleeves rolled up.”

95. “It is the purpose of the government to see that not only the legitimate interests of the few are protected, but that the welfare and rights of the many are conserved.”

96. “In politics, nothing happens by accident. If it happens, you can bet it was planned that way.”

97. “The liberty of a democracy is not safe if its business system does not provide employment and produce and distribute goods in such a way as to sustain an acceptable standard of living.”

98. “We must especially beware of that small group of selfish men who would clip the wings of the American Eagle in order to feather their own nests.”

99. “It’s a terrible thing to look over your shoulder when you are trying to lead—and to find no one there.”

100. “Confidence thrives on honesty, on honor, on the sacredness of obligations, on faithful protection and on unselfish performance. Without them it cannot live.”

101. “As a nation, we may take pride in the fact that we are softhearted; but we cannot afford to be soft-headed.”

102. “If we will not prepare to give all that we have and all that we are to preserve Christian civilization in our land, we shall go to destruction.”

105. “The alternate domination of one faction over another, sharpened by the spirit of revenge, natural to party dissension, which in different ages and countries has perpetrated the most horrid enormities, is itself a frightful despotism.”

106. “Our sons, pride of our nation, this day have set upon a mighty endeavor—a struggle to preserve our Republic, our religion, and our civilization, and to set free a suffering humanity.”

107. “The very soundness of our democratic institutions depends on the determination of our government to give employment to idle men.”

Did These Quotes Inspire You to Become a Better Leader?

Going through some of the world’s most difficult times, there are many things we can learn from Franklin D. Roosevelt. He abided by certain principles which everyone of us can apply in order to become a successful and effective leader. These principles include having an inspiring vision that people can relate to, leading with optimism and positivity, and making decisions that will benefit the greater good.

Which of these principles are reflected in his quotes and ideals? What lessons did you learn from Franklin D. Roosevelt? Comment your thoughts down below.