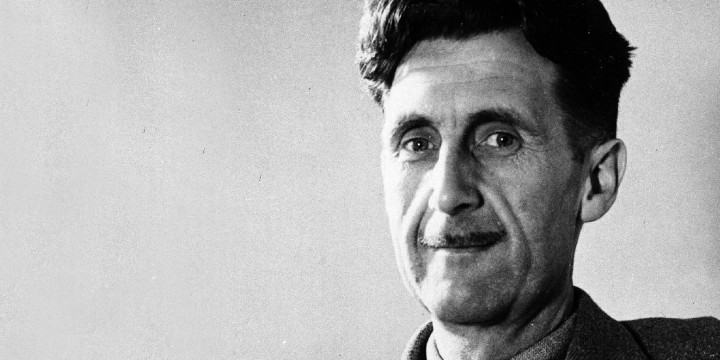 Looking for the best George Orwell quotes that will give you a glimpse of reality? Then this is the place for you.

This collection boasts of 60 quotes from some of his most well-known books like 1984 and the Animal Farm.

Though most of his works fall under fiction, their underlying themes remain relevant in today’s social scenarios.

If you want to know more, continue to the list below.

And don’t forget to check out these Frederick Douglass quotes and Voltaire quotes.

2. “War is peace. Freedom is slavery. Ignorance is strength.”

4. “Doublethink means the power of holding two contradictory beliefs in one’s mind simultaneously, and accepting both of them.”

5. “If you want to keep a secret, you must also hide it from yourself.”

6. “Perhaps one did not want to be loved so much as to be understood.”

7. “If liberty means anything at all, it means the right to tell people what they do not want to hear.”

8. “But if thought corrupts language, language can also corrupt thought.”

9. “It was a bright cold day in April, and the clocks were striking thirteen.”

10. “In a time of deceit, telling the truth is a revolutionary act.”

11. “We shall meet in the place where there is no darkness.”

12. “Political language is designed to make lies sound truthful and murder respectable, and to give an appearance of solidity to pure wind.”

13. “If you want a picture of the future, imagine a boot stamping on a human face—forever.”

14. “The most effective way to destroy people is to deny and obliterate their own understanding of their history.”

17. “The best books are those that tell you what you know already.”

20. “If you loved someone, you loved him, and when you had nothing else to give, you still gave him love.”

George Orwell Quotes on the Realities of Life and Humanity

22. “Reality exists in the human mind and nowhere else.”

23. “The essence of being human is that one does not seek perfection.”

24. “Man is the only creature that consumes without producing. He does not give milk, he does not lay eggs, he is too weak to pull the plough, he cannot run fast enough to catch rabbits. Yet, he is lord of all the animals. He sets them to work, he gives back to them the bare minimum that will prevent them from starving, and the rest he keeps for himself.”

25. “People sleep peaceably in their beds at night only because rough men stand ready to do violence on their behalf.”

26. “On the whole human beings want to be good, but not too good, and not quite all the time.”

29. “Confession is not betrayal. What you say or do doesn’t matter; only feelings matter. If they could make me stop loving you, that would be the real betrayal.”

30. “Men can only be happy when they do not assume that the object of life is happiness.”

31. “Of pain, you could wish only one thing: that it should stop. Nothing in the world was so bad as physical pain.”

32. “This work was strictly voluntary, but any animal who absented himself from it would have his rations reduced by half.”

33. “Your worst enemy, he reflected, was your own nervous system. At any moment, the tension inside you was liable to translate itself into some visible symptom.”

34. “Man serves the interests of no creature except himself.”

35. “If you can feel that staying human is worthwhile, even when it can’t have any result whatsoever, you’ve beaten them.”

38. “Let’s face it: our lives are miserable, laborious, and short.”

39. “To see what is in front of one’s nose needs a constant struggle.”

40. “It is a feeling of relief, almost of pleasure, at knowing yourself at last—genuinely down and out.”

42. “The consequences of every act are included in the act itself.”

43. “If there really is such a thing as turning in one’s grave, Shakespeare must get a lot of exercise.”

44. “It is curious how people take it for granted that they have a right to preach at you and pray over you as soon as your income falls below a certain level.”

45. “But it was alright, everything was alright, the struggle was finished. He had won the victory over himself. He loved Big Brother.”

46. “The further a society drifts from the truth, the more it will hate those that speak it.”

47. “The distinguishing mark of man is the hand—the instrument with which he does all his mischief.”

48. “Man is the only real enemy we have. Remove man from the scene, and the root cause of hunger and overwork is abolished forever.”

49. “I hate purity, I hate goodness! I don’t want virtue to exist anywhere. I want everyone to be corrupt to the bones.”

50. “The end was contained in the beginning.”

51. “Some ideas are so stupid that only intellectuals believe them.”

52. “The stars are a free show; it doesn’t cost anything to use your eyes.”

53. “His answer to every problem, every setback was ‘I will work harder!’—which he had adopted as his personal motto.”

56. “But the thought of being a lunatic did not greatly trouble him; the horror was that he might also be wrong.”

57. “He was a lonely ghost uttering a truth that nobody would ever hear. But so long as he uttered it, in some obscure way the continuity was not broken. It was not by making yourself heard, but by staying sane that you carried on the human heritage.”

58. “He felt as though he were wandering in the forests of the sea bottom, lost in a monstrous world where he himself was the monster. He was alone. The past was dead, the future was unimaginable.”

59. “You will be hollow. We shall squeeze you empty, and then we shall fill you with ourselves.”

Did These George Orwell Quotes Serve as Gateways For You to Find the Truth?

Today, more than 70 years after publishing 1984, his works still voice out the parallels we see in his publications. “Big Brother” as we know it, is “always watching”—through our phones and social media—controlling us and enslaving us, making us believe that we have to be a certain way. With this he reminds us: heed the warning; we have the power to stop this kind of reality.