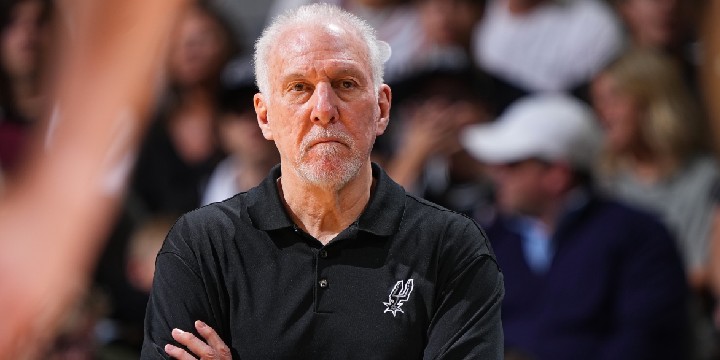 Let these Gregg Popovich quotes coach you in basketball, success, and life.

Gregg Popovich, also known as Coach Pop, is the president and head coach of the San Antonio Spurs of the National Basketball Association.

He is also famous for being the coach who has achieved the highest number of wins in basketball.

With over 1,300 wins, it is undeniable that he is a good leader who brings out the best in everyone.

Although Gregg Popovich can sometimes be sarcastic, he does an excellent job of encouraging his team to succeed.

So, if you want to win in life, then make sure to read these Gregg Popovich quotes.

Learn about teamwork, perseverance, and hard work through his wisest and most insightful lines!

Read the complete collection below.

And don’t forget to check out these Mike Krzyzewski quotes and Bob Knight quotes.

2. “The older you get, the more you try to appreciate what you’ve accomplished.”

3. “It’s not about any one person. You’ve got to get over yourself and realize that it takes a group to get this thing done.”

4. “The measure of who we are is how we react to something that doesn’t go our way.”

5. “Basketball is a pretty simple game. What wins is consistency and competitiveness.”

6. “I’m not too interested in talking about the past. It doesn’t do us any good whatsoever.”

7. “No one is bigger than the team. If you can’t do things our way, you’re not getting time here, and we don’t care who you are.”

9. “We believe in people executing their role and caring about the team more than anything individually.”

10. “Sometimes, when life moves along, you’re presented with situations where you find it necessary to speak because so many people either seem to be afraid to or, more sinister, are unwilling to face things and let things go and worry about their own situations.”

14. “I hope I can coach long enough to get more than anybody has ever had.”

17. “You have to make shots to win basketball games, and we didn’t do that. You also have to get back on defense, so it was a double-whammy.”

18. “It’s the most important thing in my life, my grandchildren can take a hike, what I might do when I retire, what kind of wine I’m going to drink—all those things pale in comparison when I think about how many wins I have.”

19. “We responded well from a real tough loss last night. That’s what a coach always looks for. It was great to come out angry enough to try to put last night out of their heads. We played well most of the night, but a lot of the fuel for that came from last night.”

20. “I can’t make every decision for you. I don’t have 14 timeouts. You guys got to get together and talk.”

21. “We have to be more consistent. We had two 9-point leads and, one 10-point lead, and then an 8-point lead at the end of the game, and we gave all of those up because of a lack of consistent defense, too many errors. We had, on offense, dry possessions where we didn’t move and took ill-advised shots. So you understand it, you look at it, and you go to work, and you try to get better.”

Gregg Popovich Quotes That Will Make You Think

23. “It’s winter. Plants don’t grow. I’m having a fight about books right now because I decided at my age that there are so many things you want to read, you can’t do it. So, do you just give up and read nothing? Or do you go into high gear and read everything you can find? I just wanted to throw that out there. When you’re out long, that’s what your mind does. You start thinking about weird things.”

24. “If you were born White, you automatically have a monstrous advantage educationally, economically, culturally, and within the society.”

25. “Who gives a damn about what his intent was, you ever heard of manslaughter? You still go to jail, I think, when you’re texting, and you kill someone. All I care is all I saw. All I care about is what happened. And the history there exacerbates the whole situation and makes me very angry.”

26. “Everybody knows there’s disparity, but it’s almost an embarrassing situation. If you’re doing well, you should be embarrassed if you’re doing nothing to try to ease that gap. Whether it’s spending time with organizations, giving money, or both, it’s a responsibility that cannot be denied. If you deny it, shame on you.”

Gregg Popovich Quotes on His Career and Experiences

27. “Anybody that doesn’t get a kick out of watching our team play should look in the mirror. It reflects more on them.”

28. “We would have two less championships here if it was not for Manu Ginobili. In my eyes, he’s the stud of the world.”

29. “Eliminating back-to-backs when you go in the wrong direction and lose time and go to bed at four in the morning for the second game is very difficult for teams, as we have learned. You just can’t bring the juice for 48 minutes. It shows in the discipline in the court and the execution in the court. If it was possible to change the entire schedule for everybody to have fewer of those, the quality would improve, without a doubt.”

30. “In Phil’s case, I was personally thrilled he came back because I think it’s huge for the league. When you think about what he’s done and how many championships he’s won, there’s always drama when he comes back in.”

31. “I’m pleased that they performed as well as they did while we’ve been in Miami, and that’s about as far as it goes. Now, we’ve got to go home and play as well or better.”

32. “They won’t choose Joakim Noah as the MVP, but I think it’s great that he’s in the conversation, and he should be. But it’s just not the way it works, from my experience. It’s got to go in the basket for you guys to pay attention to somebody. But he’s pretty damn valuable, in my opinion.”

33. “There were a lot of good contributions by a lot of people. It worked out well for us. We had pretty good overall defense and good offense, but a little sloppy. The good defense carried us through.”

34. “I’m not one to blow smoke at my players. They kicked our butts on the offensive boards, and it’s not just because the ball came their way.”

35. “It’s been pretty easy in the sense that I have a group that knows exactly who they are and what they’ve accomplished. We haven’t reached some mythical, rarefied level where everybody’s afraid of us, and they can’t touch us. That doesn’t exist.”

36. “We don’t try to convince people very often, honestly. I think it’s overblown like we’re going to have some sort of sales deal. We tried to sell Jason Kidd, and it didn’t work. We had Mariachis and everything, I think. All kinds of stuff. After that, I decided never again.”

37. “‘When you lose a game, you’re not surprised, you’re disappointed. I don’t understand the word surprise, that sort of disses the French team, so to speak, as if we were supposed to beat them by 30 or something.”

38. “I asked them if it wasn’t too much trouble, if I wasn’t being too pushy, if they could execute what we were trying to do, and if it didn’t make them too angry, if they also wanted to play some defense on the other end, that would be great.”

39. “NASA discovered all those habitable planets the other day. Do you guys know about that? One thousand two hundred habitable planets, and then last night, somebody lost a basketball game. Come on. Get over yourself.”

40. “For those who sent me something, I just want them to know, it immediately went in the trash.”

How Do You Stay Focused On Your Goals in Life?

One of the keys to success is to have an unwavering focus on the task at hand. Whenever we pour all our energy and time into something, it is almost always guaranteed that we will win. After all, being distracted and focusing on unimportant things will only hinder and hold you back.

In his long years of coaching, he taught us to look at what is essential. Gregg Popovich always focused on critical things, and he did not care about the past or regret his mistakes. Instead, he prioritized what he and his team could do to move forward and be better.

Hopefully, these quotes were able to inspire you to be more like Gregg Popovich. Make sure you arm yourself with the right tools and mindset and ready yourself to accomplish your goals and win in life.

Which Gregg Popovich quote is your favorite? Are you a fan of his? Comment your answers below!