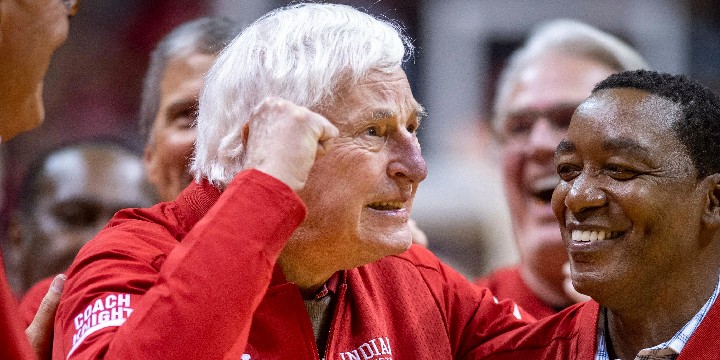 Let these Bob Knight quotes teach you about tenacity, discipline, and passion.

Bob Knight is a former basketball coach famous for his motion offense strategy on the court. He was also known for having the nickname, the General, because of how he won multiple games and trained undefeated teams.

Although multiple issues about his way of teaching arose in his career, it is undeniable that he left a massive mark in the history of basketball.

His uncompromising and always-do-your-best attitude are his keys to being one of the most memorable coaches in the field of sports.

Our collection contains the best Bob Knight quotes that will propel you toward success. So, what are you waiting for? Read the complete list below to improve yourself and be the best!

And make sure to check out these baseball quotes and John Wooden quotes.

1. “The key is not the ‘will to win.’ Everybody has that. It is the will to prepare to win that is important.”

2. “We should not have to push you to work hard. You should work hard because you want to be a great player.”

3. “What vulnerabilities do we have, and what can we do to minimize them, to get around them, to survive them, and give ourselves a better chance to win?”

4. “In order to achieve positive results, one must work for them, not hope for them.”

5. “Discipline is knowing what to do. Knowing when to do it. Doing it to the best of your abilities. Doing it that way every single time.”

6. “Early failure is usually better than early success because the lesson in humility lasts a long time and makes you more effective over the long term.”

7. “You can always turn no into yes, and usually make people happy, but it’s a lot harder, sometimes too late, to change yes to no.”

8. “People change over the years, and that changes situations for good and for bad.”

12. “Mental toughness is as physical as four is to one.”

14. “Before you can inspire your players to ‘win,’ you have to show them how not to lose.”

15. “If I came in to recruit your son, I would tell you, your wife, and your son that I will be the most demanding coach your son can play for.”

Bob Knight Quotes to Inspire You

16. “I think that we as a people are always prone to think about, well, tomorrow will be a better day. Well, why will it be a better day? And I think the more that we believe in doing things better, doing the right thing, rather than hoping that that’s going to happen. Let’s make it happen.”

20. “We just got our ass beat by a much better team. It happens once in a while. Does every team win every game?”

21. “That’s the true mark of a champion—forgetting the last victory and preparing for the next one. And that one comment should be on every coach’s wall: the first job that we have today is putting yesterday aside to be remembered later.”

22. “I’ve never predicted anything. All I have ever said is that we will do the very best we can.”

23. “A quick way for any player to make himself better is to think about what he himself doesn’t like to play against.”

Bob Knight Quotes That Are Full of Life-Changing Lessons

24. “Discipline is recognizing what has to be done, doing it as well as you can do it, and doing it that way all the time.”

25. “Your biggest opponent isn’t the other guy. It’s human nature.”

26. “It is better to anticipate than to react.”

27. “Wanting alone doesn’t get anything done.”

28. “There isn’t always an absolute right way and a wrong way to do things, but there usually is a better way, a high-percentage way. The positive thinker generally feels that his way will be the right way, and nothing will go wrong if he just believes. The negative thinker disbelieves. He takes every precaution to prevent the wrong thing from happening, and in doing so, has a much better chance of things turning out right in the end.”

30. “The mark of success, or failure, in handling victory is what happens the next time out.”

31. “One game is not a season. Pleasure, enjoyment, and success are not short-term. Success is a grind. It’s perseverance. It is operating at a high level of performance on a constant basis.”

Bob Knight Quotes on Being a Coach

33. “A coach should never be afraid to ask questions of anyone he could learn from.”

34. “A primary goal of teaching anything is the advantage that learning gives to people over their competitors who haven’t been as well taught.”

35. “The goal is to make practice more difficult, physically or mentally, than anything your players will face during a game.”

36. “I’ve never felt my job was to win basketball games. Rather, that the essence of my job as a coach was to do everything I could to give my players the background necessary to succeed in life.”

37. “The single most important aspect of coaching is running effective practices.”

38. “Basketball is a full-court game, so every drill must be done full court.”

39. “To be as good as it can be, a team has to buy into what you as the coach are doing. They have to feel you’re a part of them, and they’re a part of you.”

Did These Bob Knight Quotes Empower You to Keep Fighting for Your Dreams?

Failures and mistakes are a part of life. But, even if this experience is universal, sometimes, it is still hard to stay tough and focused on accomplishing our goals.

Basketball is very similar to the things that life throws at us. It tests us mentally and physically, and most of the time, it also changes us into someone better and stronger.

Through Bob Knight, we learn many values we can apply in our day-to-day lives. For him, being a champion means having the will to win, continuing despite difficulties, and working our way even with tons of mistakes and failures.

Hard times are what shape us up into better and improved individuals. That’s why we must treasure the hell-like practices and endure the most challenging moments of our life.

We hope these Bob Knight quotes were able to inspire you to remain persevering in whatever path you take. Make sure to reread this collection if you need some energy booster for the day.

Which Bob Knight quote do you think is the best? Are you a fan of basketball? Comment below.