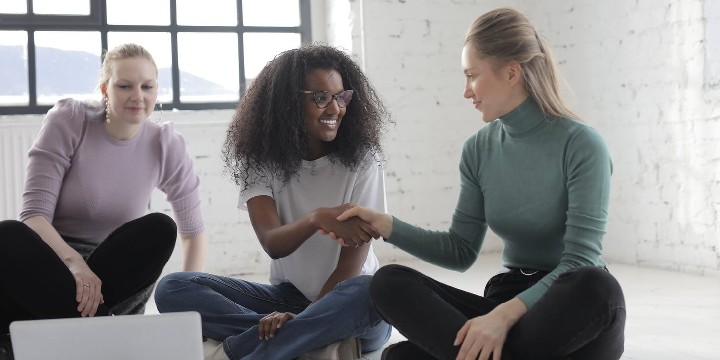 Reading through this list of International Women’s Day quotes will make you feel proud to be a woman!

We all know how women were treated before. They could not own property, could not vote, and had limited professional opportunities. But, with great effort, women are now becoming more visible in society.

They are slowly beginning to change the face of leadership and make progress toward equality.

In fact, when it comes to leading, their efforts and accomplishments are too significant to be ignored. So, every year, on the 8th of March, International Women’s Day gives us a chance to acknowledge the achievements of women everywhere.

Inequality and women’s rights might not be a problem that personally affects you, but these issues are things that’ll significantly affect society as a whole.

So, read our list below and recognize women’s achievements worldwide!

And make sure to check out these strong women quotes and women empowerment quotes.

1. “There is no limit to what we, as women, can accomplish.” – Michelle Obama

2. “A charming woman doesn’t follow the crowd; she is herself.” – Loretta Young

3. “There is nothing stronger than a broken woman who has rebuilt herself.” – Hannah Gadsby

4. “Where there is a woman, there is magic.” – Ntozake Shange

5. “She overcame everything that was meant to destroy her.” – Rumi

6. “To tell a woman everything she cannot do is to tell her what she can.” – Spanish Proverb

7. “A woman in any form shall be celebrated and honored, be it, a sister or a wife or a mother or any other form.” – Anonymous

9. ”A woman is one who walks in her own footsteps rather than following the direction shown by the crowd.” – Anonymous

10. “There’s something so special about a woman who dominates in a man’s world. It takes a certain grace, strength, intelligence, fearlessness, and the nerve to never take no for an answer.” – Rihanna

International Women’s Day Quotes to Inspire Ladies Around the World

11. “One of the best things that ever happened to me is that I’m a woman. That is the way all females should feel.” – Marilyn Monroe

12. “A woman, she is born with the power to save and love; her existence is based on the truthfulness in her eyes.” – Anonymous

14. “Women are the largest untapped reservoir of talent in the world.” – Hillary Clinton

15. “We need to reshape our own perception of how we view ourselves. We have to step up as women and take the lead.” – Beyoncé

16. “No woman should be told she can’t make decisions about her own body. When women’s rights are under attack, we fight back.” – Kamala Harris

17. “The strongest action for a woman is to love herself, be herself, and shine amongst those who never believed she could.” – Anonymous

18. “We are the breathing, living manifestations of the hopes of women who are not breathing anymore. We must hope for ourselves, our daughters, and the women a hundred years from now. We are the thing with feathers, and now we must spread our wings and fly.” – Deborah Frances-White

21. “I am proud of the woman I am today because I went through one hell of a time to become her.” – Anonymous

23. “Her soul is fierce; her heart is brave, her mind is strong.” – Anonymous

24. “Women are the mammoth reservoir of power and talent which has yet not been tapped.” – Anonymous

25. “She is strong, but not in the ways most people think. She loves more than she’ll ever get back, and she knows it, yet she loves anyway.” – J.M. Storm

26. “The world needs strong women who will lift and build others. Who will love and be loved? Women who live bravely, both tender and fierce; women of indomitable will.” – Amy Tenney

27. “A strong woman can also be vulnerable. Just because there’s a crack in your armor, don’t doubt your strength for one moment.” – Anonymous

28. “And one day she discovered that she was fierce and strong and full of fire and that not even she could hold herself back, because her passion burned brighter than her fears.” – E. Corona

29. “She was a true fighter; you could see it in her eyes. She wasn’t born strong; she was made strong. She was sculpted to be her own when the world let her down, and she kept picking herself back up.” – Anonymous

International Women’s Day Quotes to Understand What Makes You Special

31. “There’s something about a woman with a loud mind that sits in silence, smiling, knowing she can crush you with the truth.” – R.G. Moon

34. “A woman performs all the duties of a man, but a man cannot do all that a woman can do.” – Anonymous

35. ”No matter where you go, you can encounter the power of a woman, she runs a company in the most efficient way, and she raises her children in a way that nobody ever can think of doing!” – Anonymous

36. “Women are the epitome of courage, hope, and life. Let us take a pledge this Women’s Day that we will make the world a much better place for them.” – Anonymous

37. “A woman with a voice is by definition a strong woman. But the search to find that voice can be remarkably difficult.” – Melinda French Gates

38. “I can encourage the women who are striving to get their footing in the world to keep pushing and to express themselves.” – Angela Yee

39. “A strong woman is the one who can dare to raise her voice for the cause she believes in, and this strength lives in a corner in every women’s heart; it just needs to be searched.” – Anonymous

Short International Women’s Day Quotes for You to Read

40. “Behind every successful woman is herself.” – Anonymous

43. “I do not wish women to have power over men, but over themselves.” – Mary Shelley

48. “To all the little girls who are watching this, never doubt that you are valuable and powerful, and deserving of every chance and opportunity in the world to pursue and achieve your own dreams.” – Hillary Clinton

49. “Every woman’s success should be an inspiration to another. We’re strongest when we cheer each other on.” – Serena Williams

50. “She promised better things for herself, so she sought out those things and never looked back.” – Anonymous

51. “When women support each other, incredible things happen.” – Anonymous

53. “Fill your life with women that empower you, that help you believe in your magic and aid them to believe in their own exceptional power and their incredible magic too. Women that believe in each other can survive anything.” – Nikita Gill

54. “Because you are women, people will force their thinking on you, their boundaries on you. They will tell you how to dress, how to behave, who you can meet and where you can go. Don’t live in the shadows of people’s judgment. Make your own choices in the light of your own wisdom.” – Amitabh Bachchan

55. “In our society, the women who break down barriers are those who ignore limits.” – Arnold Schwarzenegger

56. “Our country was built by strong women, and we will continue to break down walls and defy stereotypes.” – Nancy Pelosi

57. “A successful woman is one who can build a firm foundation with the bricks others have thrown at her.” – Anonymous

58. “Empower woman, empower the human community. The base on which the world stands is a woman.” – Anonymous

59. “The best way to change the society and the underlying issues is to channelize the power of women in every walk of life.” – Anonymous

60. “She has been through hell, so believe me when I say, fear her when she looks into fire and smiles.” – E. Corona

61. “She was a wild one. Always stomping on eggshells that everyone else tip-toed on.” – Kaitlin Foster

62. “A woman in harmony with her spirit is like a river flowing. She goes where she will without pretense and arrives at her destination prepared to be herself and herself only.” – Maya Angelou

63. “A woman is the full circle. Within her is the power to create, nurture, and transform.” – Diane Mariechild

64. “She’s a strong cup of black coffee in a world that is drunk on the cheap wine of shallow love.” – Anonymous

65. “Never ever mistake her silence for weakness. Remember that sometimes the air stills before the onset of a hurricane.” – Anonymous

66. “They may talk of a comet, or a burning mountain, or some such bagatelle; but to me, a modest woman, dressed out in all her finery, is the most tremendous object of the whole creation.” – Oliver Goldsmith

68. “What we women need to do, instead of worrying about what we don’t have, just loves what we do have.” – Cameron Diaz

69. “Women belong in all places where decisions are being made. It shouldn’t be that women are the exception.” – Ruth Bader Ginsburg

70. “We need to live in a culture that values and respects and looks up to and idolizes women as much as men.” – Emma Watson

71. “A woman should be taught to believe in protecting herself on her own and not to depend on a man for her protection. She has the power to protect the world and not just herself.” – Anonymous

73. “No struggle can ever succeed without women participating side by side with men. There are two powers in the world; one is the sword, and the other is the pen. There is a third power stronger than both, that of women.” – Malala Yousafzai

74. “What’s the greatest lesson a woman should learn? Since day one, she’s already had everything she needs within herself. It’s the world that convinced her she did not.” – Rupi Kaur

75. ”There is only one thing in the Universe which a woman still needs to learn, and that one thing is that she has the power to turn the direction of the wind on her own.” – Anonymous

76. “Women must try to do things as men have tried. When they fail, their failure must be but a challenge to others.” – Amelia Earhart

77. “Women’s history is bigger than one person, so the way we talk about the past needs to be, as well.” – Alice Wroe

78. “Think like a queen. A queen is not afraid to fail. Failure is another stepping stone to greatness. Happy Women’s Day!” – Anonymous

80. “A woman is so much more than just a human being. She has the power to create a life, cope up with so much pain, and somehow always end up being the strongest one in the room. Happy Women’s Day to all goddesses out there!” – Anonymous

Do You Also Believe That It’s Important to Celebrate International Women’s Day?

We can all agree that women have accomplished a lot in the last century. So, celebrating International Women’s Day is a meaningful way to recognize the struggles and sacrifices of women throughout history and celebrate their achievements.

Sadly, today, women are still in an ongoing battle to fight for gender equality. In most countries around the world, women still have unequal access to education, healthcare, and jobs. Worse, they can be victims of violence and sexual exploitation.

But, the good thing is that women are brave, fearless, and know when to stand firm. They are not afraid to take a stand and speak out for what is right. Times are changing, and we’re just waiting for the day when women have equal rights and opportunities with men.

When that time comes, discrimination will be a thing of the past. Hopefully, this list of quotes was able to open your eyes to the importance of celebrating International Women’s Day. Keep in mind that you are not just a woman—you are a woman with strength, power, and influence!