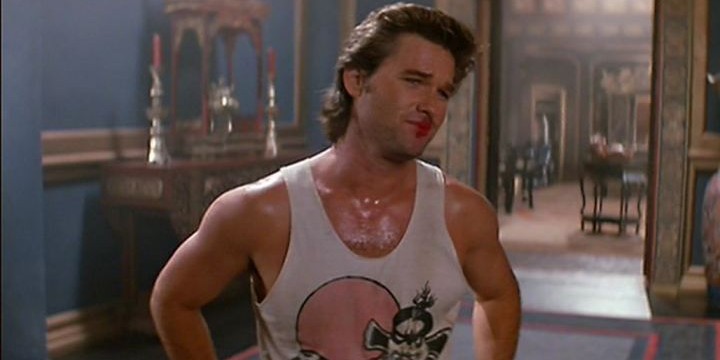 Here are the top 70 Jack Burton quotes that will make you fall in love with his awkward and hardworking character.

Jack Burton is one of the main protagonists of the film, Big Trouble in Little China.

He is a truck driver making a delivery when he suddenly becomes involved in the fight between Good and Evil.

The truth is, Jack Burton is not the main hero of the film—he is only a sidekick of Wang Chi.

He is a funny and relatable character, but one who is brave and full of determination.

Take a closer look at his charm and story by reading the entire collection below.

2. “May the wings of liberty never lose a feather.”

3. “A girl from China? All right, I never done that. I picked up girls from everywhere else, but never from China.”

5. “You go off to rule the universe from beyond the grave or check into a psycho ward, whichever comes first, huh?”

6. “Sooner or later, I rub everybody the wrong way.”

8. “Okay. You people sit tight, hold the fort, and keep the home fires burning. And if we’re not back by dawn, call the president.”

12. “Would you stop rubbing your body up against mine because I can’t concentrate when you do that.”

13. “This is Jack Burton in the Pork Chop Express, and I’m talking to whoever’s listening out there.”

14. “Just remember what ol’ Jack Burton does when the earth quakes, and the poison arrows fall from the sky, and the pillars of Heaven shake. Yeah, Jack Burton just looks that big ol’ storm right square in the eye, and he says, ‘Give me your best shot, pal. I can take it.'”

17. “All I know is this Lo Pan character comes out of thin air in the middle of a g*dd*mn alley while his buddies are flying around on wires cutting everybody to shreds, and he just stands there waiting for me to drive my truck straight through him, with light coming out of his mouth!”

21. “When some wild-eyed, eight-foot-tall maniac grabs your neck, taps the back of your favorite head up against the bathroom wall, looks you crooked in the eye, and asks you if you paid your dues. You just stare that big sucker right back in the eye, and you remember what ol’ Jack Burton always says at a time like that, ‘Have you paid your dues, Jack?’ ‘Yes, sir, the check is in the mail.’”

23. “Which Lo Pan? Little old basket case on wheels or the 10-foot-tall roadblock?”

25. “Jack, what? I’m supposed to buy this sh*t? Two thousand years, he can’t find one broad to fit the bill? Come on, Dave, you must be doing something seriously wrong!”

Jack Burton Quotes and Conversations to Laugh About

Jack Burton: “I know, there’s a problem with your face.”

30. “I took something. I can see things other men cannot see. Why are you dressed like that?”

31. “I know, but still, you’re staying top-side with Eddie and Uncle Chu!”

Jack Burton: “What? Huh? What’ll come out no more?”

Jack Burton Quotes That Are Full of Wisdom

36. “Well, you see, I’m not saying that I’ve been everywhere, and I done everything. But I do know it’s a pretty amazing planet we live on here, and a man would have to be some kind of fool to think we’re all alone in this universe.”

37. “This is going to take crackerjack timing, Wang.”

38. “If you have problem like that again, just reach for the sky!”

39. “You just listen to the old Pork Chop Express here now and take his advice on a dark and stormy night when the lightning’s crashing and the thunder’s rolling and the rain’s coming down in sheets thick as lead.”

40. “Two, three feet thick, I’ll bet. Probably welded shut from the outside and covered with brick by now!”

41. “Not so fast, gentlemen! We got enough people dropping like flies around here, and where’s that getting us, huh? Nowhere fast.”

42. “Is this gonna get ugly, now? Huh? I hope not. Because I thought what we were here, racial differences notwithstanding, was just a couple of old friends. You know, just both of us Californians.”

65. “So what is this? Chinese or something? Counting backward?”

More Jack Burton Quotes That You Will Love

66. “Okay, I get the picture—White Tigers, Lords of Death, guys in funny suits throwing plastic explosives while poison arrows fall from the sky and the pillars of heaven shake, huh? Sure, okay, I see Charlie Chan, Fu Manchu, and a hundred howling monkey temples, and that’s just for starters, right? Fine! I’m back! I’m ready, goddammit, let me at them!”

67. Margo Litzenberger: “God, aren’t you even gonna kiss her goodbye?”

68. “Mutual Fidelity Insurers of Sacramento. Well, there’s gotta be a listing, honey, ‘cause I pay them six G’s a year in premiums.”

Which Jack Burton Quote Is Your Favorite?

While watching the movie, we can find ourselves cheering for Jack Burton. He is a character that tries so hard to be the hero that makes us see ourselves in him.

Jack is an everyman character dragged into a world full of action and adventure. Just like how we are first exploring the realities of life, Jack also struggles but has the determination to succeed. He is also a loyal friend that makes him a lovable and relatable protagonist.

Jack reminds us that there is no harm in being kind and making an effort. After all, we can only regret the things where we did not do our best. Keep going and cheer up in facing the battles of life!

What is your biggest takeaway from reading the collection? Let us know what you think in the comments section below.