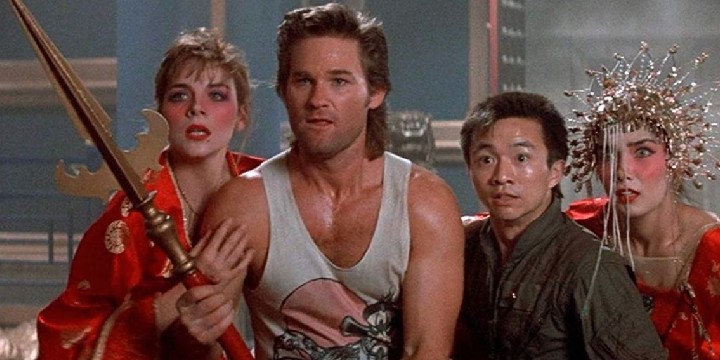 Get your daily dose of laughter with the help of these Big Trouble in Little China quotes!

Big Trouble in Little China is an iconic movie that’s remembered for many things. However, it was anything but a blockbuster when it was first released. Maybe this is because the audience’s attention was grabbed by movies like Top Gun, also released in the same year.

Nonetheless, this movie is such an icon that many fans still watch and quote every line. It’s weirdly awesome in its own way, combining elements from both the East and the West. So, while there’s a lot of debate as to whether Big Trouble in Little China is a good movie or not, in the hearts of its fans, it will always remain a cult classic.

So, we’ve compiled the best lines from this movie to get you started. Get ready to laugh out loud as you scroll through these Big Trouble in Little China quotes!

And make sure to read these V for Vendetta quotes and Days of Thunder quotes.

Jack Burton: “I was born ready.”

3. Wang Chi: “A brave man likes the feel of nature on his face, Jack.”

Egg Shen: “Yeah, and a wise man has enough sense to get in out of the rain!”

4. “Okay. You people sit tight, hold the fort and keep the home fires burning. And if we’re not back by dawn, call the president.” – Jack Burton

5. “When some wild-eyed, eight-foot-tall maniac grabs your neck, taps the back of your favorite head up against the barroom wall, and he looks you crooked in the eye, and he asks you if ya paid your dues, you just stare that big sucker right back in the eye, and you remember what ol’ Jack Burton always says at a time like that, ‘Have ya paid your dues, Jack?’ ‘Yessir, the check is in the mail.’” – Jack Burton

Jack Burton: “Hey, what more can a guy ask for?”

Egg Shen: “Wind, fire, all that kind of thing!”

7. Wang Chi: “Here’s to the army and Navy and the battles they have won; here’s to America’s colors, the colors that never run.”

Jack Burton: “May the wings of liberty never lose a feather.”

9. “I’m not saying I’ve been everywhere and I’ve done everything. But I do know this is a pretty amazing planet we live on here. And a man would have to be some kind of fool to think we’re all alone in this universe.” – Jack Burton

10. Eddie Lee: “Well sure it was a war. And anybody that showed up was gonna join Lem Lee in the Hell of Being Cut to Pieces.”

Jack Burton: “Hell of being what?”

Eddie Lee: “Chinese have a lot of hells.”

11. “This is Jack Burton in the Pork Chop Express, and I’m talkin’ to whoever’s listenin’ out there.” – Jack Burton

12. “Just remember what old Jack Burton does when the earth quakes and the poison arrows fall from the sky and the pillars of Heaven shake. Yeah, Jack Burton just looks that big old storm right in the eye and says, ‘Give me your best shot. I can take it.’” – Jack Burton

David Lo Pan: “Shut up, Mr. Burton! You were not brought upon this world to get it!”

Big Trouble in Little China Quotes That Will Blow Your Mind

15. “Would you stop rubbing your body up against mine? Because I can’t concentrate when you do that.” – Jack Burton

20. Jack Burton: “You can go off and rule the universe from beyond the grave.”

Do You Agree That Big Trouble in Little China Deserves to Be a Blockbuster?

While Big Trouble in Little China wasn’t a complete flop when it was released, it also wasn’t the blockbuster everyone expected. Yet, its unique storyline and themes definitely captured the viewers’ hearts!

Big Trouble in Little China mixed and matched different genres and showcased different cultures and beliefs. Kurt Russell’s portrayal of Jack Burton is also something we can never forget!

Additionally, Director John Carpenter also put in some great special effects in the movie. It’s something he’s known for, considering his work on Starman, Escape from New York, and more.