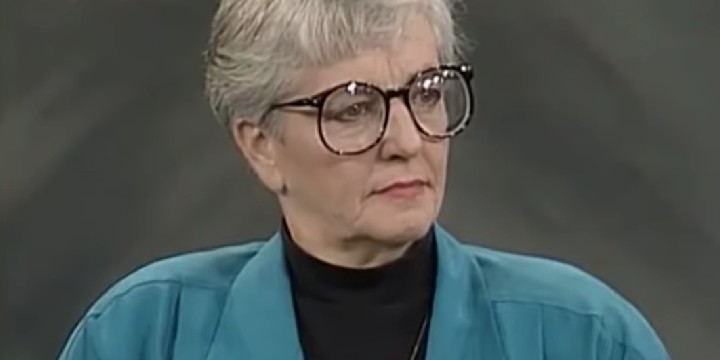 Break the chains of racism through these top Jane Elliott quotes.

Jane Elliott is an activist, diversity educator, and school teacher. She is also a mother of five children and a wife.

Jane became known for her Blue Eyes/Brown Eyes experiment to explain prejudice to her third-grade students.

She is a courageous and empowered woman who wants to stop discrimination.

We hope that these quotes will motivate you to fight for what is right.

Learn more about the causes and effects of racial inequality by reading our collection below.

And don’t forget to check out these Timothy Leary quotes and Steve Irwin quotes.

1. “Should the color of some other person’s eyes have anything to do with how you treat them?”

2. “You are not born racist. You are born into a racist society, and like anything else, if you can learn it, you can unlearn it. But some people choose not to unlearn it because they’re afraid they’ll lose power if they share with other people. We are afraid of sharing power. That’s what it’s all about.”

4. “I’ve got news for you—there are going to be people other than Christians in the hereafter. What are you going to do about it? Are you not going to go?”

5. “Age is how we determine how valuable you are.”

6. “People who are racist aren’t stupid. They’re ignorant, and the answer to ignorance is education.”

7. “We don’t know anything about racism. We’ve never experienced it. If words can make a difference in your life for seven minutes, how would it affect you if you heard this every day of your life?”

9. “About 10,000 years ago, males and females were acting equitably and were treating one another as equals, and then males took over the power because they have physical power and physical strength.”

10. “What did you people who are wearing blue collars now find out today?”

11. “It’s time to insist that educators recognize the myth, teach about the myth, but teach the truth that there’s only one race—it’s the human race.”

12. “Racism is a learned affliction, and anything that is learned can be unlearned.”

14. “White people in this country are tweaked. We are raised to believe a myth of white superiority. Malcolm X, in The Autobiography of Malcolm X, said that white people’s ‘belief that they are superior’ in some way is so deeply rooted that these things are in the national white subconscious.”

15. “People who say, ‘We aren’t all racists,’ if you graduated from high school in the United States of America and you didn’t learn how to be a racist, you need to take the whole program over again because that’s what the program is—how to be a good American.”

16. “We don’t need a melting pot in this country, folks. We need a salad bowl. In a salad bowl, you put in different things. You want the vegetables—the lettuce, the cucumbers, the onions, the green peppers—to maintain their identity. You appreciate differences.”

17. “Black Lives Matter movement is the most important thing to have happened on this continent since Martin Luther King Jr.”

18. “This is the most Hitlerian administration I’ve ever seen. This man is talking about racial cleansing.”

19. “Racism is only, as we practice it, about 500 years old. We could destroy it if we chose to. But that would take education.”

20. “Education in this country is about how to maintain the status quo and to perpetuate racism.”

21. “Nobody is born a bigot. You have to learn bigotry. Bigotry is a learned response.”

22. “I don’t wanna go to my grave knowing that we didn’t make a difference.”

23. “To sit back and do nothing is to cooperate with the oppressor.”

24. “Four hundred and fifty thousand Iraqi children have died from starvation and lack of medicine as a result of our embargo. If you believe God loves little children—and hundreds of thousands more Iraqi children will die if there is war—you have to believe that God will judge us very harshly for this.”

25. “Somebody has to wear the black hat and give the audience someone to shake their fists at. They want someone to hate, and if that’s what you want to pay me to do, I’m happy to do it!”

26. “When you say to a person of color, ‘When I see you, I don’t see you Black. I just see everybody the same.’ Think about that. You don’t have the right to say to a person, ‘I do not see you as you are. I want to see you as I would be more comfortable seeing you.'”

28. “That’s what this country should be—a place where people are appreciated for who they are.”

29. “I am absolutely opposed to political correctness. You cannot confront hate speech until you’ve experienced it. You need to hear every side of the issue instead of just one.”

31. “Racism is not genetical. It has everything to do with power.”

32. “No white group has founded a major religion on this planet. The major religions were started in the Orient and the Middle East, not in Greece and Rome. I always knew you racists didn’t have a prayer.”

33. “We have to start seeing all people as our relatives. You are a member of my family. I will not allow you to be abused because of somebody else’s ignorance about the color of your skin.”

34. “I watched my students become what I told them they were. I watched little wonderful brown-eyed, white people become vicious, ugly, nasty, discriminating, domineering people in the space of 15 minutes.”

35. “I’m a practicing Christian, and I’m going to keep practicing ’till I get it right, but I don’t feel everyone has to practice the same religion that I do. You have a right to worship who you choose and how you choose to.”

36. “They need to realize that one of the things, one of the driving forces in this election was the knowledge people have that within 30 years white people will have lost their numerical majority in the United States of America.”

37. “I loved raising my kids. I loved the process, the dirt of it, the tears of it, the frustration of it, Christmas, Easter, birthdays, growth charts, pediatrician appointments. I loved all of it.”

38. “I think I’m the only 65-year-old actress in Los Angeles who hasn’t had plastic surgery, so somebody’s gotta play the old-lady parts!”

39. “I love nothing better than to get all the nuts and bolts out of the way, show up on time with lines learned, clear on what the director expects of me with my buttons buttoned, and my jewelry on correctly, and then I completely commit to play-acting.”

40. “Submitting myself for awards feels like a weird kind of horn-blowing that’s not comfortable for me. I’m really happy when someone likes my work, but I don’t like marketing myself, putting myself on display.”

41. “Nothing thrills me more than to be good at something. It’s very rewarding, and I feel grateful and blessed, and I never take it for granted.”

43. “My guilty pleasure is Revenge. I’ve watched it from the very first episode.”

45. “I’m not curing cancer or running a small county. I haven’t developed a greener car. I just play act.”

46. “I love playing smart and tough and having funny lines.”

47. “I’m not one of those actors who spends a lot of time engaging with the audience.”

48. “I don’t tweet or do any other social media, so I don’t know what’s being said out there.”

49. “If I can bring people a moment of fun and relief in their lives, well, that’s the win.”

50. “The flowers of the forest are wide awake.”

Which Jane Elliott Quote Pushes You to Fight Against Discrimination?

Jane Elliott left a legacy for opening the eyes of many people in the world. She amplified the voices of the discriminated and continues to do so until today.

She appeared on The Tonight Show, White House Conference, and The Oprah Winfrey Show. The attention she got proves how her advocacies reached the hearts of the people.

Her impact on society is only the first step towards change. The collection of quotes above is a lesson for many of us to start taking action on the violence and abuse in the world.

Have you watched documentaries about her experiment? What are your thoughts on her methods? Join the discussion in the comments section below!