And make sure to read these Fred Hampton quotes and Malcolm X quotes.

1. “Only in the darkness can you see the stars.” 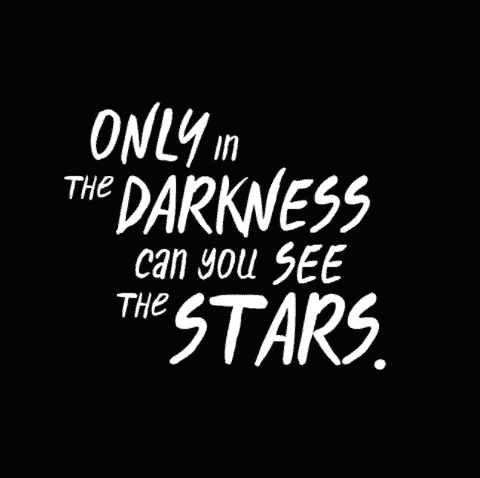 2. “If I cannot do great things, I can do small things in a great way.”

3. “We must accept finite disappointment, but never lose infinite hope.”

6. “There is no gain without struggle.”

7. “The time is always right to do the right thing.”

8. “No one really knows why they are alive until they know what they’d die for.”

9. “Nothing in the world is more dangerous than sincere ignorance and conscientious stupidity.”

10. “As my sufferings mounted I soon realized that there were two ways in which I could respond to my situation – either to react with bitterness or seek to transform the suffering into a creative force. I decided to follow the latter course.” 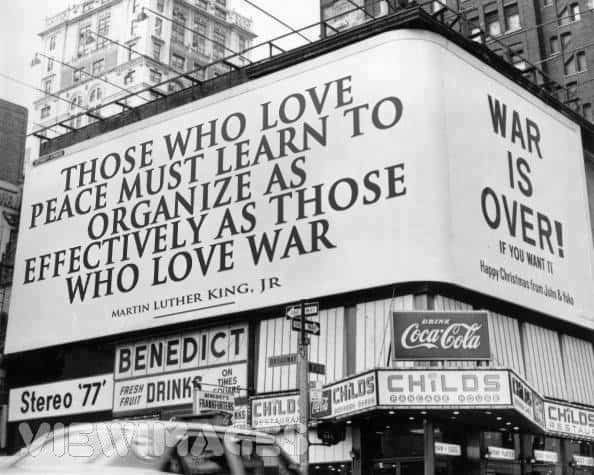 Well, you may go on and live until you are 90, but you’re just as dead at 38 as you would be at 90. And the cessation of breathing in your life is but the belated announcement of an earlier death of the spirit.”

13. “One day we will learn that the heart can never be totally right when the head is totally wrong.”

15. “Never, never be afraid to do what’s right, especially if the well-being of a person or animal is at stake. Society’s punishments are small compared to the wounds we inflict on our soul when we look the other way.”

18. “Those who are not looking for happiness are the most likely to find it, because those who are searching forget that the surest way to be happy is to seek happiness for others.”

20. “Love is the only force capable of transforming an enemy into a friend.” 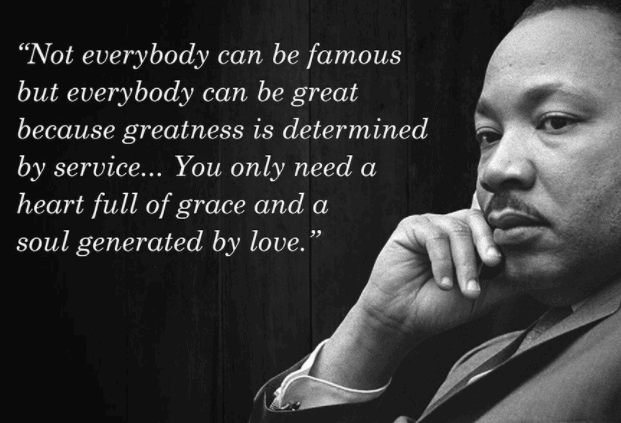 22. “If a man has not discovered something that he will die for, he isn’t fit to live.”

23. “Forgiveness is not an occasional act; it is a constant attitude.”

24. “True compassion is more than flinging a coin to a beggar; it comes to see that an edifice which produces beggars needs restructuring.”

26. “Rarely do we find men who willingly engage in hard, solid thinking. There is an almost universal quest for easy answers and half-baked solutions. Nothing pains some people more than having to think.”

27. “We must rapidly begin the shift from a “thing-oriented” society to a “person-oriented” society. When machines and computers, profit motives and property rights are considered more important than people, the giant triplets of racism, materialism, and militarism are incapable of being conquered.”

28. “Life’s most persistent and urgent question is, ‘What are you doing for others?”

30. “I believe that unarmed truth and unconditional love will have the final word in reality. This is why right, temporarily defeated, is stronger than evil triumphant.” 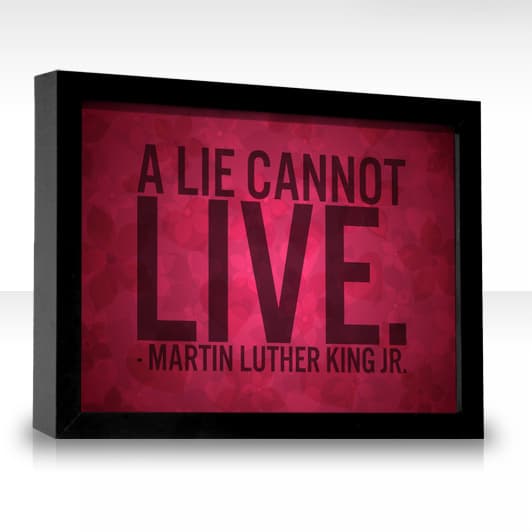 32. “Whatever your life’s work is, do it well. A man should do his job so well that the living, the dead, and the unborn could do it no better.”

33. “It is not enough to say we must not wage war. It is necessary to love peace and sacrifice for it.”

34. “Power without love is reckless and abusive, and love without power is sentimental and anemic. Power at its best is love implementing the demands of justice, and justice at its best is power correcting everything that stands against love.”

35. “I have decided to stick with love. Hate is too great a burden to bear.”

36. “Seeing is not always believing.”

37. “The soft-minded man always fears change. He feels security in the status quo, and he has an almost morbid fear of the new. For him, the greatest pain is the pain of a new idea.”

38. “We must build dikes of courage to hold back the flood of fear.”

40. “Peace is not merely a distant goal that we seek, but a means by which we arrive at that goal.”

41. “Property is intended to serve life, and no matter how much we surround it with rights and respect, it has no personal being. It is part of the earth man walks on. It is not man.” 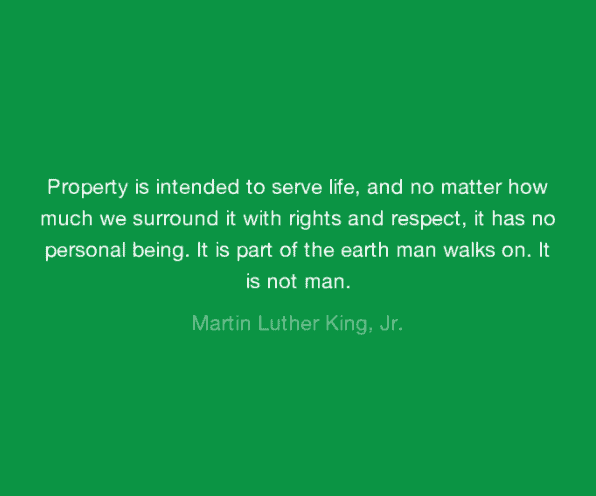 43. “I have a dream that my four little children will one day live in a nation where they will not be judged by the color of their skin, but by the content of their character.”

45. “The quality, not the longevity, of one’s life is what is important.”

47. “There can be no deep disappointment where there is not deep love.”

49. “Faith is taking the first step even when you don’t see the whole staircase.”

50. “The ultimate tragedy is not the oppression and cruelty by the bad people but the silence over that by the good people.” 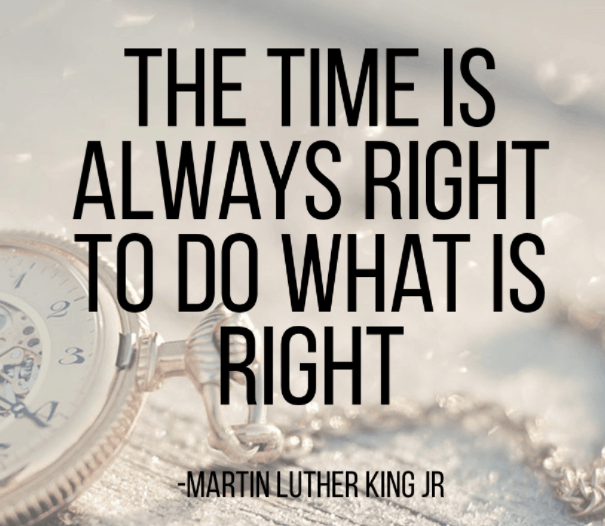 52. “A nation that continues year after year to spend more money on military defense than on programs of social uplift is approaching spiritual doom.”

53. “Almost always, the creative dedicated minority has made the world better.”

57. “In the End, we will remember not the words of our enemies, but the silence of our friends.”

58. “Never forget that everything Hitler did in Germany was legal.”

59. “The function of education is to teach one to think intensively and to think critically. Intelligence plus character – that is the goal of true education.”

60. “We must concentrate not merely on the negative expulsion of war but the positive affirmation of peace.” 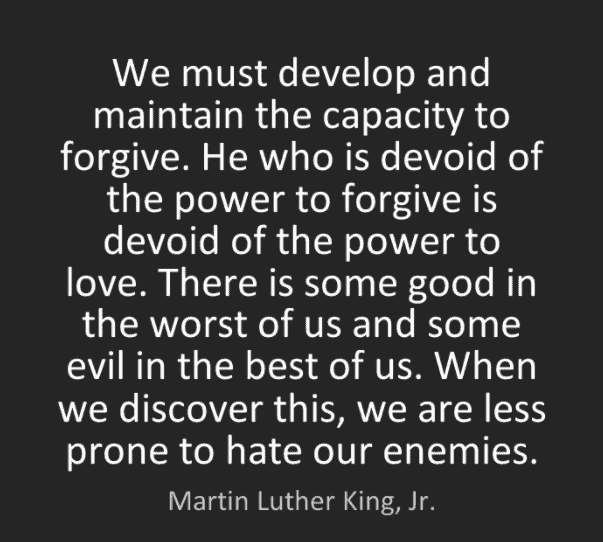 63. “Our lives begin to end the day we become silent about things that matter.”

64. “Nonviolence is absolute commitment to the way of love. Love is not emotional bash; it is not empty sentimentalism. It is the active outpouring of one’s whole being into the being of another.”

66. “The limitation of riots, moral questions aside, is that they cannot win and their participants know it. Hence, rioting is not revolutionary but reactionary because it invites defeat. It involves an emotional catharsis, but it must be followed by a sense of futility.”

68. “He who passively accepts evil is as much involved in it as he who helps to perpetrate it. He who accepts evil without protesting against it is really cooperating with it.”

69. “Injustice anywhere is a threat to justice everywhere.”

70. “A genuine leader is not a searcher for consensus but a molder of consensus.”

71. “Nonviolence is a powerful and just weapon. Indeed, it is a weapon unique in history, which cuts without wounding and ennobles the man who wields it.” 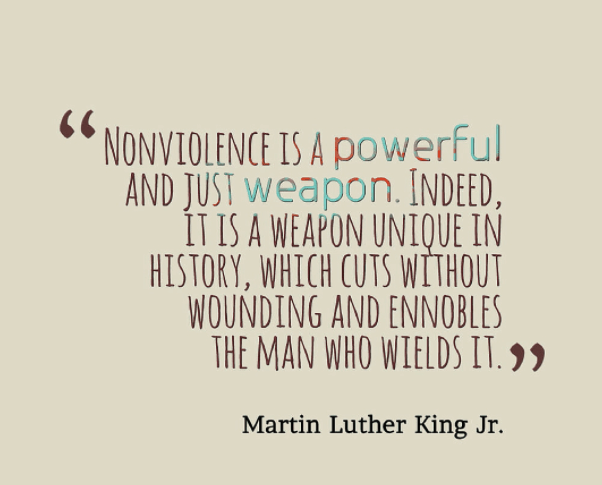 72. “There comes a time when people get tired of being pushed out of the glittering sunlight of life’s July and left standing amid the piercing chill of an alpine November.”

73. “All labor that uplifts humanity has dignity and importance and should be undertaken with painstaking excellence.”

74. “Everything that we see is a shadow cast by that which we do not see.”

75. “Change does not roll in on the wheels of inevitability, but comes through continuous struggle. And so we must straighten our backs and work for our freedom. A man can’t ride you unless your back is bent.”

76. “Man must evolve for all human conflict a method which rejects revenge, aggression and retaliation. The foundation of such a method is love.”

77. “Every man must decide whether he will walk in the light of creative altruism or in the darkness of destructive selfishness.”

78. “The moral arc of the universe bends at the elbow of justice.”

79. “The hope of a secure and livable world lies with disciplined nonconformists who are dedicated to justice, peace and brotherhood.”

80. “An individual has not started living until he can rise above the narrow confines of his individualistic concerns to the broader concerns of all humanity.”

82. “Wars are poor chisels for carving out peaceful tomorrows.”

83. “At the center of non-violence stands the principle of love.”

84. “I just want to do God’s will. And he’s allowed me to go to the mountain. And I’ve looked over, and I’ve seen the promised land! I may not get there with you, but I want you to know tonight that we as a people will get to the promised land.”

87. “There is nothing more tragic than to find an individual bogged down in the length of life, devoid of breadth.”

88. “The God whom we worship is not a weak and incompetent God. He is able to beat back gigantic waves of opposition and to bring low prodigious mountains of evil. The ringing testimony of the Christian faith is that God is able.”

91. “Our scientific power has outrun our spiritual power. We have guided missiles and misguided men.” 92. “What is wrong in the world today is that the nations of the world are engaged in a bitter, colossal contest for supremacy.”

93. “Of all the forms of inequality, injustice in health care is the most shocking and inhumane.”

94. “In the process of gaining our rightful place, we must not be guilty of wrongful deeds. Let us not seek to satisfy our thirst for freedom by drinking from the cup of bitterness and hatred. We must forever conduct our struggle on the high plane of dignity and discipline. We must not allow our creative protest to degenerate into physical violence. Again and again, we must rise to the majestic heights of meeting physical force with soul force.”

95. “I have the audacity to believe that peoples everywhere can have three meals a day for their bodies, education and culture for their minds, and dignity, equality, and freedom for their spirits.”

98. “There comes a time when silence is betrayal.”

99. “Now there is a final reason I think that Jesus says, “Love your enemies.” It is this: that love has within it a redemptive power. And there is a power there that eventually transforms individuals. Just keep being friendly to that person. Just keep loving them, and they can’t stand it too long. Oh, they react in many ways in the beginning. They react with guilt feelings, and sometimes they’ll hate you a little more at that transition period, but just keep loving them. And by the power of your love they will break down under the load. That’s love, you see. It is redemptive, and this is why Jesus says love. There’s something about love that builds up and is creative. There is something about hate that tears down and is destructive. So love your enemies. (from “Loving Your Enemies”)”

100. “One of the great tragedies of life is that men seldom bridge the gulf between practice and profession, between doing and saying. A persistent schizophrenia leaves so many of us tragically divided against ourselves. On the one hand, we proudly profess certain sublime and noble principles, but on the other hand, we sadly practise the very antithesis of these principles. How often are our lives characterised by a high blood pressure of creeds and an anaemia of deeds! We talk eloquently about our commitment to the principles of Christianity, and yet our lives are saturated with the practices of paganism. We proclaim our devotion to democracy, but we sadly practise the very opposite of the democratic creed. We talk passionately about peace, and at the same time we assiduously prepare for war. We make our fervent pleas for the high road of justice, and then we tread unflinchingly the low road of injustice. This strange dichotomy, this agonising gulf between the ought and the is, represents the tragic theme of man’s earthly pilgrimage.”