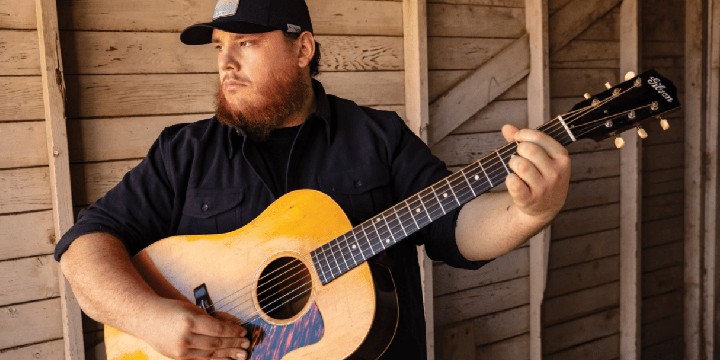 Sing your heart out with these Luke Combs quotes that’ll inspire you about life, love, and many more.

Despite his success, Combs regards himself as a novice with much to learn. He continues to work hard to write songs that will speak to his listeners’ hearts. We hope that this collection of quotes help you learn more about his wisdom and musical style.

And don’t forget to check out these Morgan Wallen quotes and guitar quotes.

1. “You don’t think that much about life. You just live it.”

2. “There’s an authenticity in just being who you are and not having an act about it or wear clothes you normally wouldn’t wear. I’m just comfortable in my own skin.”

3. “Everyone’s got some but I need one that brings you back; we all got our reasons, just like you.”

4. “There’s a lot of things in this whole world I can stand. But when it comes to losin’ you, I just can’t.”

5. “I’m an honest dude, not trying to be anything other than who I am.”

6. “Sometimes, you sit down to write a song, you don’t realize what it’s going to mean to somebody other than yourself.”

7. “As crazy as it sounds, my generation is very lazy.”

8. “I apologize for being associated with that. Hate is not a part of my core values, and it’s not something that I consider a part of myself at all.”

9. “But sometimes things ain’t what you think they’re gonna be. What you want ain’t always what you need.”

12. “I guess goodbye’s just too tough, ‘cause last time was the last time but we’re fallin’ all over again.”

17. “You hit me category five with your smile. Blew me away.”

18. “I’ve been singing my entire life. The guitar came to me later on down the road.”

19. “I hope you get everything that you had coming.”

20. “I never knew a king-size bed was just another place to drown, or how lonely lonely sounds, but man I get it now.”

21. “It’s a good pair of jeans and a pair of boots that are comfortable and a T-shirt; that’s as far as I go. Getting wild with it might be a nice jacket, but I’m not a high fashion guy for sure.”

22. “We’d been out touring for a couple of years before we signed with Sony and everything.”

23. “If you’re anything like me you just might be doing whatever it takes to drown out the noise.”

25. “I don’t want to put myself in any kind of a box as far as my sound goes, because being an artist is fluid. If you look at a painter’s work, a lot of times, it’s similar in style, but other times—over even a year’s period—it can change so much. I’m just going with the flow.”

26. “Both of my grandfathers were in the service. It’s one of those things that you can’t be thankful enough for.”

Luke Combs Quotes About His Musical Dream and Journey

27. “I knew I was a good singer—I’ve been singing my whole life, so I was comfortable enough with that—I felt like I could compensate for not being great on guitar.”

29. “It’s awesome to have friends among the country music community that you know are looking out for you and that you are excited to get to see on the road.”

31. “I do gravitate towards the sad songs because I find them to be more of a challenge for me from a writing perspective. There are things about those songs that do touch people in a way that a fun song can’t.”

32. “I think I never had this grandiose dream of being any country music star. I just slowly progressed into that’s what I’m doing.”

33. “When I go into a room to write, it’s like I’m not trying to say, ‘I need to write a song that sounds like Eric Church or Jason Aldean.’ I just try to get the best song that’s in the room that day. Whatever style or sound that may be, I’m not afraid to attack it at that angle.”

34. “If I can reach the guy in Alabama that hunts, and he hears that song, and he sees me—like, he’s comfortable with me, my image as a person, as an artist—he’s willing to sit down and give that song a chance.”

35. “It’s been cool to watch the fans who’ve kind of always been there for me. That’s just a special feeling every night; to go out and know that there are people that are proud, not just to be at the show but proud to be your fan, and they’re invested in what you’re doing.”

Luke Combs Quotes That Describe His Personality and Interests

36. “I know that I’m a very highly visible member of the country music community right now, and I want to use that position for good and to say that people can change, and people do want to change, and I’m one of those people trying.”

37. “I think there’s kind of a comfortability with me onstage—and I think my cool factor is not having one. I’m not extra cool or extra different.”

38. “I really enjoy the shopping and going out and getting stuff for other people. I could really give a damn about getting gifts for myself, but I really enjoy giving gifts.”

39. “As a younger man, that was an image that I associated to mean something else. And as I’ve grown in my time as an artist, and as the world has changed drastically in the last five to seven years, I am now aware how painful that image can be to someone else.”

40. “I’ve never been too concerned with what I’m wearing, and that probably makes a lot of people angry, but I let the music do the talking and let the image be what it’s going to be.”

41. “I didn’t know how to play guitar until I was 21, but from the moment I was good enough on guitar to even put one song together, I kind of billed myself as an artist.”

42. “I just love writing songs and singing them. People seem to enjoy them, and that’s all you can really ask for. I didn’t get into it to try to be a celebrity or whatever.”

43. “I’m a student of Eric Church, and I say that a lot—I was drawn to it because of the honesty and because it’s got rough edges on it. He doesn’t shy away from anything, and that’s the way I wanted to be.”

44. “The coolest Christmas present I’ve ever received is probably socks. My grandma always gets me socks—every year—and that’s something that I’ve probably never bought for myself. If Christmas wasn’t around and my grandma didn’t get me socks, I wouldn’t own any, probably.”

45. “Turkey hunting is my thing; it’s only once a year, but if it’s turkey season, don’t call me, because I won’t answer.”

Luke Combs Quotes on His Fans and Dream Concerts

48. “I think that was kind of always my goal; get people to come back and see a show twice and then see it a third time. And now I’ve got people who have been to 30, 40 shows.”

49. “I think the crowds in Europe are songwriter crowds. Like, they are a fan of the words, and they’re there to listen. An American crowd, they’re there to get rowdy, man. And I love both.”

50. “Anytime that me and the guys go out on the road, it’s fun to step away from the craziness of what it is we do. I just enjoy that time being outside with my buddies.”

51. “I didn’t even know what a tour manager was, but I was the tour manager, booking agent, all that stuff for almost two years without knowing it. I wasn’t overwhelmed, because I enjoyed doing it.”

52. “I drove to Nashville a few times, met with some people and hung out, went to the Opry, and that kind of stuff. I made the decision—you’ve got to be present to win, so I packed it up and moved out here, and it’s been great. It’s been the best decision I ever made.”

53. “Sometimes people are looking for, ‘What’s the next Tesla car? What’s this really cool, super-specific thing that people are going to want?’ But I try to be just like a Ford truck. They sell a lot more Ford trucks than they do Tesla cars.”

56. “And I ain’t gotta see my ex-future mother-in-law anymore. Oh Lord, when it rains it pours.”

57. “I can only stay for so long ’til that Honky Tonk Highway’s calling me home.”

58. “You wrecked my whole world when you came and hit me like a hurricane.”

59. “Will you pick up when I call or just forget we loved at all? We don’t have to talk. I just wanna hear your voice.”

60. “I pick up a beer can and get to feeling like Superman.”

61. “And I’ve been on a hell of a redneck road for three weeks now and it all started on the day that she walked out.”

62. “She got the best of me. She broke my heart. Now all that’s left of me is beating in this guitar.”

64. “I guess, be careful what you wish for, is all I meant when I said what you see is what you get.”

66. “The way you say I love you, too. It’s like rain on an old tin roof. And your hand fits in mine like a needle in a groove. Some things go better together and probably always will.”

68. “These city lights can’t shine quite like the stars. I wish I could wish her back into my arms.”

69. “I’ve been knocked down time and time again. Got picked back up by love and a few good friends.”

73. “What I thought was gonna be the death of me was my saving grace.”

75. “There’s a couple people that I owe a beer or two, and three or four that I owe more than a few.”

76. “When all my friends would get away, seems I’d get caught plain as day.”

78. “Sometimes we’ve oil and water, but I wouldn’t have it any other way.”

79. “Couldn’t wait to ride out of that one-horse town, didn’t see no use in sticking around.”

80. “Yeah, those were the days we thought we’d never lose. But we did and we miss how it was when we were just kids.”

What Is It About Luke Combs That You Admire the Most?

It is true that “when it rains, it pours” because Combs’ success is unstoppable. The majority of his songs peaked at the top of the Billboard Country Airplay chart.

Luke’s musical style and professionalism inspired a lot of people. He persisted in learning to play the guitar to fulfill his dream of becoming a singer.

Learning new skills is possible for everyone motivated to learn. We hope that these Luke Combs quotes were able to help you get the motivation to work for your own goals.

Which of these Luke Combs quotes are your favorites? Please, comment in the space below.