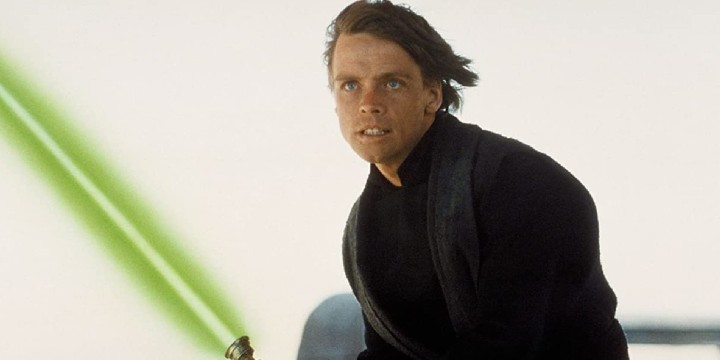 This list of the best Luke Skywalker quotes we’ve collected will make you want to have a Star Wars movie marathon.

In the new Jedi order, Luke Skywalker was the most well-known Jedi knight.

He was also an important figure in the rebel alliance’s battle against the dark side.

As Darth Vader’s son, Luke accepted his fate and chose to side with the good guys.

He continued to be righteous, which aided in his father’s return to the good side.

Let’s grab our lightsabers and travel to the skies as we investigate Luke Skywalker’s most iconic quotes.

And make sure to read these Star Wars quotes and Anakin Skywalker quotes.

1. “Your overconfidence is your weakness.”

3. “I’ll never turn to the dark side. You’ve failed, your highness. I am a Jedi, like my father before me.”

4. “I’m taking Captain Solo and his friends. You can either profit by this—or be destroyed.”

5. “If there’s a bright center to the universe, you’re on the planet that it’s farthest from.”

7. “I want to come with you to Alderaan. There’s nothing for me here now. I want to learn the ways of the Force, and become a Jedi like my father.”

8. “The Force is not a power you have. It’s not about lifting rocks. It’s the energy between all things, a tension, a balance, that binds the universe together.”

10. “He is strong with the Force, but talent without training is nothing. I will give my life to protect the child—but he will not be safe until he masters his abilities.”

11. “Search your feelings, father. You can’t do this. I feel the conflict within you. Let go of your hate.”

12. “Because I was Luke Skywalker. Jedi Master. A legend.”

13. “You’re gravely mistaken. You won’t convert me as you did my father.”

14. “You couldn’t bring yourself to terminate me before and I don’t believe you’ll destroy me now.”

15. “The rebellion is reborn today. The war is just beginning. And I will not be the last Jedi.”

17. “That Force does not belong to the Jedi. To say that if the Jedi die, the light dies, is vanity.”

18. “The Emperor hasn’t driven it from you fully. That was why you couldn’t destroy me. That’s why you won’t bring me to your Emperor now.”

20. “I saw darkness. I’d sensed it building in him. I’d seen it in moments during his training. But then I looked inside, and it was beyond what I ever imagined.”

21. “Strike me down in anger, and I’ll always be with you, just like your father.”

22. “Impressive—every word in that sentence was wrong.”

23. “But I was going into Tosche Station to pick up some power converters!”

24. “I’ve seen this raw strength only once before in Ben Solo. It didn’t scare me enough then. It does now.”

25. “It was a Jedi Master who was responsible for the training and creation of Darth Vader.”

26. “It offered something you needed. And you didn’t even try to stop yourself.”

30. “I will never train another generation of Jedi. I came to this island to die. It’s time for the Jedi to end.”

32. “Come with me. Leave everything behind.”

36. “It’s your choice, but I warn you not to underestimate my powers.”

37. “That armor’s too strong for blasters. Rogue Group, use your harpoons and tow cables. Go for the legs. It might be our only chance of stopping them.”

42. “Not unless you can alter time, speed up the harvest, or teleport me off this rock.”

45. “They’re gonna execute her! Look, a few minutes ago, you said you didn’t want to just wait here to be captured. Now all you want to do is stay?”

46. “Come on. Why don’t you take a look around? You know what’s about to happen, what they’re up against. They could use a good pilot like you. You’re turning your back on them.”

50. “I seek an audience with Your Greatness to bargain for Solo’s life. With your wisdom, I’m sure that we can work out an arrangement which will be mutually beneficial and enable us to avoid any unpleasant confrontation. As a token of my goodwill, I present to you a gift, these two droids.”

53. “It was the last night of her training. Leia told me that she had sensed the death of her son at the end of her Jedi path. She surrendered her saber to me and said that one day—it would be picked up again—by someone who would finish her journey. A thousand generations live in you now. But this is your fight.”

54. “You will bring Captain Solo and the Wookiee to me.”

55. “You know, between his growling and your blasting everything in sight, it’s a wonder the whole station doesn’t know we’re here.”

56. “It’s not impossible. I used to shoot womp rats with my T16 back home. They were no bigger than two meters.”

57. “Now that they’re extinct, the Jedi are romanticized, deified. But if you strip away the myth and look at their deeds, the legacy of the Jedi is failure.”

60. “You don’t need Luke Skywalker. You think what? I’m gonna walk out with a laser sword and face down the whole First Order? What did you think was going to happen here? You think that I came to the most unfindable place in the galaxy for no reason at all? Go away.”

62. “Obi-Wan. Why didn’t you tell me? You told me Vader betrayed and murdered my father.”

Luke Skywalker Quotes About the Truth

70. “I’ve accepted the truth that you were once Anakin Skywalker, my father.”

72. “It is the name of your true self. You’ve only forgotten. I know there is good in you.”

73. “No, my father didn’t fight in the wars. He was a navigator on a spice freighter.”

75. “Well, I stumbled across a recording while I was cleaning him. He says that he belongs to someone called Obi-Wan Kenobi. I thought he might have meant old Ben. Do you know what he’s talking about?”

76. “He would bring destruction, and pain, and death, and the end of everything I love because of what he will become, and for the briefest moment of pure instinct, I thought I could stop it.”

78. “This little droid. I think he’s searching for his former master. I’ve never seen such devotion in a droid before.”

79. “You serve your master well. And you will be rewarded.”

80. “But I’ve learned so much since then. Master Yoda, I promise to return and finish what I’ve begun. You have my word.”

Would You Accept Darth Vader as a Family Member if You Were Luke Skywalker?

We can’t choose our family, and this is one of Luke’s challenges. His father is Anakin Skywalker, commonly known as Darth Vader—a former Jedi who became an enemy.

Despite his father’s dark history, he learned to embrace him and change his thinking. This merely goes to show that everyone is entitled to a second chance.

We are all victims of our circumstances. However, we can choose what is right and what is wrong. Let us not be selfish and always consider the interests of the majority.

These Luke Skywalker quotes can help you appreciate the unconditional love that parents have for their children. Whatever the situation, your family is always there for you. Continue and cherish every moment you have with them while you still have the chance.

What is your favorite Luke Skywalker quote? Please, post them in the comments area below.