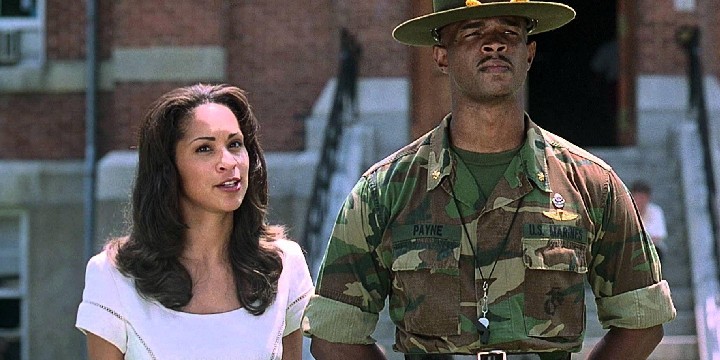 These top 140 Major Payne quotes will help you build your confidence, patience, and discipline in order to face life’s challenges.

It instills a few remarkable life lessons in current service members, military members, and society as a whole.

By reading this collection, you will feel the tension and humor of the story. Go to your favorite spot and prepare to learn!

And make sure to check out these A Few Good Men quotes and Hellraiser quotes.

1. “Now you might feel a little pressure.” – Major Payne

2. “Maybe not, but I can clean out your colon faster than one of those burritos with extra guacamole sauce!” – Major Payne

4. “I see what we have here is a failure to communicate. Do not attempt to valid my authority! I have eight weeks to turn you gaggling maggots into a well-disciplined unit. From this day forward, your sorry asses belong to me. You will not eat, sleep, drink, blow your nose, or dig in your butts without my say so. Know this—killing is my business, ladies, and business is good!” – Major Payne

7. “From now on, my little group of shaved scrotum sacks, you will walk like me, talk like me, eat like me, and until you win those games, you will be bald like me.” – Major Payne

9. “One! Don’t you feel dumb. Two! Look at you. Three! Don’t you ever make jokes about me behind my back, or else I’ll stomp you into the ground.” – Major Payne

10. “Maybe, what he needs is for you to pop your titty out his mouth, and let the boy grow up.” – Major Payne

12. “Boy, I am two seconds from being on you, like white on rice in a glass of milk, on a paper plate in a snowstorm. I’m gonna put my foot so far up your ass, the water on my knee will quench your thirst.” – Major Payne

13. “From my heart, left ventricle; took it out myself with a field knife.” – Major Payne

14. “General, are you telling me that nowhere in the military is there any longer a job for trained human weapons of destruction such as myself? Surely there must be somebody left who needs some killing, or some killing done for them.” – Major Payne

18. “He’s trying to show you some affection.” – Emily Walburn

23. “Want me to show you a little trick to take your mind off that arm?” – Major Payne

25. “Let me tell you something ass-eyes. Let me tell you all something. War has made me very paranoid! And when you get to eye-balling me, makes my Agent Orange act up, makes me want to kill!” – Major Payne

26. “I didn’t stutter, I said pop-your-titty-out-his-mouth and stop babying him.” – Major Payne

27. “I tell ya, ladies, you’re the prettiest cadets under my command. I oughta change my name to Pimp Daddy Payne.” – Major Payne

28. “You’re still a shit sandwich. You’re just not a soggy one. From this moment, you are no longer turds. You have graduated to maggots!” – Major Payne

30. “Who’s the person that got me this blood on this lip? Who’s responsible? Don’t all run at once. Maybe no one’s responsible. I just had it comin’!” – Major Payne

Provoking Major Payne Quotes That Will Piss You Off

32. “What about family, and unity, and all that other bullshit you said?” – Cadet Alex Stone

34. “What’s your damage, muscle head? You stupid? You ignorant or are you just plain old deaf?” – Major Payne

35. “You eye me one more time, I’ll snatch it out and put it in Heathcoat’s cookie bag!” – Major Payne

36. “I’m sorry Mr. Handicapped Man. Do you understand sign language? Can you read lips? Well, if you don’t answer me when I speak to you, I’m gonna put my foot in your ass, is that clear dummy?” – Major Payne

37. “What the hell was that, you little freckle face cartoon? Did I give you permission to sneeze, Opie?” – Major Payne

38. “Let me tell you something, I am not your damn brother!” – Major Payne

39. “Then you hold it before I kick your ass back to Mayberry.” – Major Payne

40. “Let’s move it, you turds. You’ll get no sympathy from me. You want sympathy, look in the dictionary between shit and syphilis. That’s where you’ll find my sympathy. This ain’t no walk in the park, let’s go. Hustle, hustle, hustle.” – Major Payne

41. “That’s not enough. Look at them, these animals are so pathetic that even their own commander didn’t even show up.” – Lieutenant

42. “‘Slippery,’ he says. You think Charlie cares anything about slippery? The only thing he knows is to slit your throat. What if this were a life-or-death situation?” – Major Payne

43. “Any man that’d leave you outta be monkey-stomped and have his brains mailed back to his mother.” – Major Payne

44. “What are you laughing at, pig-boy? You find a piece of candy in your pocket? What’s your name, son?” – Major Payne

45. “You look like the Pillsbury Dough-boy. If I poke your stomach, will it make you laugh? We’re gonna have to make some room for your lunch, Bacon-boy. Get down there and give me 25 crunches, and count them out.” – Major Payne

48. “Be advised, ladies. We are going to win the Virginia Military Games this year! You will note my emphasis on the word WIN: Whisky! India! November! Get used to the sound of that word!” – Major Payne

49. “Fighting is no longer being done out on the battlefields. Now, all the blood is shed in the halls of Congress, boys like us are becoming dinosaurs.” – Major Payne

50. “General, are you telling me that in this man’s military, is there no room for trained weapon of destruction?” – Major Payne

51. “Listen, I’ve made some calls and I have an assignment for you. It’s not great, you understand, but it gets you back in the military.” – General Decker

52. “The promotion board report came out last week. This is the new Lieutenant Colonel list, your name’s not on it. You get two chances to advance, then we have to show you the hatch. Basic man is cutting you discharge orders right now.” – General Decker

55. “Cadets, I’m pleased to announce the top two rated squads that will compete for first and second place in the Parade Drill Competition—Wellington Academy and Madison Academy.” – Colonel Braggart

56. “Major Payne, what are you doing here? I was told you were away on an important assignment.” – Colonel Braggart

57. “Lieutenant, I can only disqualify the cadet who started the disturbance.” – Colonel Braggart

58. “This is unsatisfactory. I demand the entire Madison Squad be disqualified from the final competition.” – Colonel Stone

60. “Nobody’s leaving here until you turds get this course down to 80 seconds.” – Major Payne

73. “Because you are the one with the biggest tits!” – Cadet Alex Stone

74. “The green boys, they wear those green things. You know what’s funny? When they stand in front of the bushes, I can’t see them!” – Dr. Phillips

75. “Major! What are the boys doing in those dresses?” – Emily Walburn

One-Liners and Quotes From Major Payne

83. “You like the way I handled them white folks back there?” – Major Payne

91. “What happened? You terminate his command?” – Major Payne

94. “Payne, what happened? You’ve only been out one week.” – General Decker

95. “I thought we had a little talk about this kind of negative reinforcement.” – Emily Walburn

101. “Major Payne, can you please help me to understand why you shaved the children bald?” – Emily Walburn

102. “Most blood is now shed in the halls of Congress, Payne. Guys like us are becoming dinosaurs.” – General Decker

103. “He’s a little upset about this morning. Apparently, he had a little accident.” – Emily Walburn

104. “Do you really think this is the best way to gain the respect and admiration of these young men?” – Emily Walburn

Hilarious Major Payne Quotes That Will Keep You Entertained

110. “Oh, that’s my little incentive program. These boys have to earn their do—their hair-do that is.” – Major Payne

112. “Well, that’s all this is. Now, you better run on up to your room before that man jump out the closet and chop your little head off!” – Major Payne

114. “Yo, Dumbo. You should be able to fly through those tubes with them big-ass ears, boy.” – Major Payne

115. “Williams, you tell Marlee Matlin’s son to get across that rope before I hang him with it.” – Major Payne

116. “Aw, phooey! Don’t you ever read any of those stories about little people who do big things? Little Red Riding Hood! The Three Little Pigs! Spike Lee! The Little Rascals! How about the Little Engine That Could!” – Major Payne

120. “Heathcoat, get your side-of-pork booty over that wall.” – Major Payne

122. “What could be more important than having my boys winning this here competition? I suggest we get this party started. Is that okay with you Colonel?” – Major Payne

127. “Negative. I figure if the Marines wanted me to have a wife, they would’ve issued me one.” – Major Payne

130. “My name is Major Benson Winifred Payne! As of 0800, I am replacing Major Frankfurt as your commanding officer!” – Major Payne

132. “Hello, little fella. What you had was a nightmare. You know what a nightmare is?” – Major Payne

134. “Apparently, he pissed all over the front of his pants.” – Major Payne

135. “They won’t let me go on a ‘Black Op,’ because I’m too little, and nobody ever lets you do anything when you’re little.” – Cadet Kevin Dunn

How Do You Handle Life’s Obstacles?

It’s difficult to keep going when you’re on the verge of losing. There are so many thoughts racing through your mind about how to stand again. Still, for the sake of our family, we have no choice but to continue.

Major Benson Payne is a tough Marine who was discharged for failing to reach the rank of Lieutenant Colonel. To prepare the raucous junior trainees for a military cadet competition, he instills discipline, confidence, and diligence in them.

This film has taught us to never stop learning, to appreciate the importance of teamwork, and to boost our self-esteem. You will win if you believe in your abilities!

What valuable lessons did you gather from this collection? Do you want to work in the military? Please, leave a comment below.