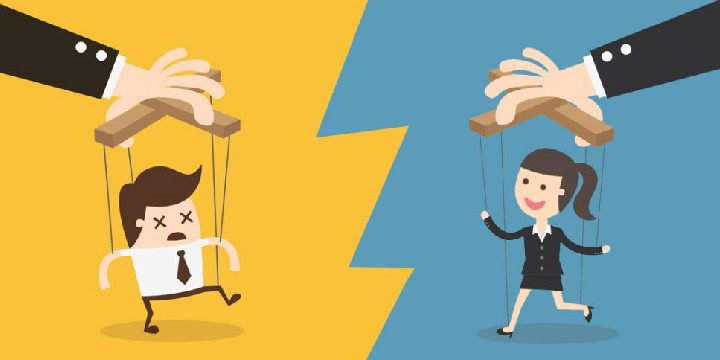 If you feel something’s holding you back from achieving something greater, read through these manipulation quotes and be inspired to break free from others’ puppeteering!

Because of life’s harsh reality, we’ve conditioned ourselves to view life through rose-colored glasses. Doing so negatively impacts how we react to things and people and how we go through life.

We tend to be ignorant of the truth and other people’s intentions. This makes us more prone to deceit and betrayal. Sadly, a lot of people take this as an opportunity to manipulate others.

Manipulation is a toxic trait that destroys both the person manipulating and the person being manipulated. It’s a double-edged sword. So, if you want to avoid living with this toxic trait, read through our list of quotes below!

1. “Manipulation can give you anything in life you want—if you can afford it.” – M.F. Moonzajer

2. “A heart of manipulation is to be empathized without being touched.” – Anonymous

3. “Manipulation, fueled with good intent, can be a blessing. But when used wickedly, it is the beginning of a magician’s karmic calamity.” – T.F. Hodge

4. “Manipulation is a contagious disease, much more dangerous than the flu because it can endure for a lifetime.” – Dorothy McCoy

7. “Manipulative people are those who wish to be loved on their own terms.” – David S. Viscott

8. “When they can no longer control or manipulate you, they smear you.” – Steve Maraboli

9. “The best way to manipulate a man is to make him think he is manipulating you.” – John Smith

10. “The biggest tool of manipulation is words, so always interpret the meaning rather than the words.” – Anonymous

11. “When manipulation flutters around everywhere, neither pull nor push anyone. Just do one thing—don’t trust anyone!” – Ashish Patel

13. “Belief can be manipulated. Only knowledge is dangerous.” – Frank Herbert

14. “An apology without change is just manipulation.” – Anonymous

15. “Vision without integrity is not a mission—it’s manipulation.” – Howard G. Hendricks

16. “Guilt is a special kind of manipulation tactic.” – D.T Bloom

17. “Some people pretend to be the beach, but they are actually quicksand.” – Steve Maraboli

18. “Art is the manipulation of someone else’s imagination.” – Sol Saks

20. “You can’t manipulate people who know how to think for themselves.” – Trish Mercer

21. “Nothing manipulates people more than the desire to please.” – Zoe Durlock

23. “Manipulators count on strong emotions—such as guilt, fear, love, and shame—to prevent us from thinking clearly and seeing what they’re up to. That’s exactly how they get away with it.” – Adelyn Birch

Manipulation Quotes for Those Experiencing Toxicity

24. “Everybody has the ability to be manipulative, to be hateful and deceitful.” – Neil LaBute

25. “Playing with people’s feelings through manipulation is a way of controlling their hearts.” – Ron Prat

26. “The people who would like to manipulate and use you won’t tell you your blind spots. They may plan to continue using them to their advantage.” – Assegid Habtewold

27. “Manipulative people do not consider the other person’s point of view; they will take it at the expense of others.” – Richard Malthouse

28. “Yes, he took care of me and helped me, but these good deeds were the water to make his seed of manipulation grow.” – Abigail Osborne

29. “Whining is a form of manipulation. People will give anything to make you shut up.” – Jessica Zafra

30. “People are always busy trying to manipulate and dominate others!” – Salman Aziz

Manipulation Quotes for People in Relationships

31. “True love is built on free will and free choice, not control and manipulation.” – Ken Poirot

32. “Relationships with negative people are simply tedious encounters with porcupines. You don’t have the remote knowledge of how to be close to them without quills being shot in your direction.” – Shannon L. Alder

34. “If you feel confused because someone tells you that they love you, but they don’t act like they do, judge them by their actions alone. You will have your answer.” – Adelyn Birch

35. “Love comes when manipulation stops; when you think more about the other person than about his or her reactions to you. When you dare to reveal yourself fully. When you dare to be vulnerable.” – Joyce Brothers

36. “If there is no honesty, there is no relationship. The only degree to which there is a relationship is the degree to which you are honest. Expressing your clear desires does not make you a dictator, and you telling what you think, feel, and what you want or don’t want is just called being honest. It doesn’t control him at all. You’re trying to control others by withholding information by not getting involved, and by not being honest. Withholding information is a form of manipulation. It is dishonest, and it’s destructive to a relationship.” – Stefan Molyneux

Manipulation Quotes to Keep In Mind

37. “Until you realize how easy it is for your mind to be manipulated, you remain the puppet of someone else’s game.” – Evita Ochel

38. “Manipulating people always involves utilizing a half-truth or a lie in order to achieve a certain goal.” – Ralf Juhre

39. “Often enough, the manipulator approaches, stimulates, or even creates a powerful wish or a strong desire in the target’s mind.” – Sapir Handelman

40. “To toy with something is to manipulate it, to try it out within sets of contexts none of which is determinate.” – Susan Stewart

Manipulation Quotes That Will Make You Think

42. “We live in a world of things, and our only connection with them is that we know how to manipulate or to consume them.” – Erich Fromm

45. “Just because something isn’t a lie does not mean that it isn’t deceptive. A liar knows that he is a liar, but one who speaks mere portions of truth in order to deceive is a craftsman of destruction.” – Criss Jami

46. “For to deceive someone by manipulation is to distort their relationship with the world, and that will always threaten to undermine the calmness and steadiness of mind upon which their retention of the practice of truth depends.” – Jonardon Ganeri

48. “If you don’t give education to people, it is easy to manipulate them.” – Pele

49. “All writing is a form of manipulation, of course, but you realize that a plain sentence can actually do so much.” – Colm Toibin

50. “It was easier to manipulate someone if they didn’t perceive you as a threat.” – Stephanie Wrobel

52. “In most cases, energy is lost in little games of manipulation, in little struggles of will, in the attempts to possess others, to wrap them up, to delude them, to shine them on.” – Frederick Lenz

53. “If you are an approval addict, your behavior is as easy to control as that of any other junkie. All a manipulator needs to do is a simple two-step process: give you what you crave and then threaten to take it away. Every drug dealer in the world plays this game.” – Harriet B. Braiker

More Manipulation Quotes for Everyone

55. “The success of the manipulation depends on the level of conviction and force of the denial.” – Tess Binder

56. “When ambition gets out of hand, we are vulnerable to manipulation by others.” – Keith Campbell

57. “When it comes to controlling human beings, there is no better instrument than lies. Because you see, humans live by beliefs. And beliefs can be manipulated. The power to manipulate beliefs is the only thing that counts.” – Michael Ende

58. “Because to take away a man’s freedom of choice—even his freedom to make the wrong choice—is to manipulate him as though he were a puppet and not a person.” – Madeleine L’Engle

59. “For manipulation to be most effective, evidence of its presence should be nonexistent. It is essential, therefore, that people who are manipulated believe in the neutrality of their key social institutions.” – Herbert Schiller

60. “Manipulating people is what’s so fun about poker. I love that you can just look into someone’s eyes and lie—and it’s perfectly acceptable.” – Cheryl Hines

Did These Quotes Help You Recognize When Someone Is Manipulating You?

You’ll come across many different types of people in your life. Some of them would be genuinely kind and would honestly want the best for you. But, sadly, there will be many more people who will take advantage of you and manipulate you just to get what they want.

This is why you should be more vigilant about who you trust and believe. No one will ever be 100% on your side because it’s human nature to be selfish and put oneself first.

While you try to be more discerning about who you trust, ensure you don’t become too selfish and manipulate others to get what you want. We are all capable of manipulation, so we must be more mindful of how we act toward others.

When you feel like you’re being surrounded by toxicity again, or if you think you are being toxic to others, reread these manipulation quotes! Be mindful of how you act because you’re affecting others’ lives, too!