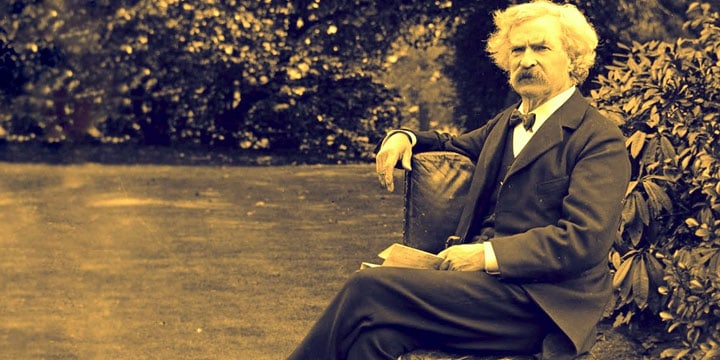 If you need help navigating through life, then check out this list of our favorite Mark Twain quotes!

Mark Twain was a famous American writer who filled pages with words full of humor, wit, wisdom, and insight.

Some of his most notable works include Adventures of Huckleberry Finn and The Adventures of Tom Sawyer. These, among many, are classics we’re sure you’ve encountered in school or elsewhere.

More than his career as an author, Mark Twain also delved into many different hobbies and interests.

He was a riverboat pilot, an entrepreneur, an inventor, and more. He lived a life worth telling stories about, and his collective experiences gave us insights beyond what we can learn through narratives.

However profound his words are, if you take the time to analyze them, you’ll find that there are so many valuable lessons to live by.

To get you started, we’ve gathered his 70 best quotes below. Don’t miss out and read through to the end!

And make sure to check out these John Steinbeck quotes and Ernest Hemingway quotes.

1. “Give every day the chance to become the most beautiful of your life.”

2. “The two most important days in your life are the day you are born and the day you find out why.”

3. “The secret of getting ahead is getting started.”

4. “Twenty years from now you will be more disappointed by the things you didn’t do than by the ones you did do. So, throw off the bowlines. Sail away from the safe harbor. Catch the trade winds in your sails. Explore. Dream. Discover.”

5. “Courage is resistance to fear, mastery of fear, not absence of fear.”

6. “Never put off till tomorrow what may be done the day after tomorrow just as well.”

7. “With courage, you will dare to take risks, have the strength to be compassionate, and the wisdom to be humble. Courage is the foundation of integrity.”

8. “Truth is stranger than fiction, but it is because fiction is obliged to stick to possibilities; the truth isn’t.”

9. “Do the thing you fear most, and the death of fear is certain.”

10. “The trouble is not in dying for a friend, but in finding a friend worth dying for.”

12. “All good things arrive unto them that wait and don’t die in the meantime.”

13. “Everyone is a moon, and has a dark side which he never shows to anybody.”

14. “Kindness is the language which the deaf can hear and the blind can see.”

15. “If you tell the truth, you don’t have to remember anything.”

16. “I was seldom able to see an opportunity until it had ceased to be one.”

17. “I have never let my schooling interfere with my education.”

18. “What is the most rigorous law of our being? Growth.”

19. “The secret of success is making your vocation your vacation.”

21. “Clothes do not merely make the man; clothes are the man.”

22. “Nothing so needs reforming as other people’s habits.”

24. “A man cannot be comfortable without his own approval.”

25. “There is no sadder thing than a young pessimist, except an old optimist.”

26. “A lie can travel halfway around the world while the truth is putting on its shoes.”

27. “Anger is an acid that can do more harm to the vessel in which it is stored than to anything on which it is poured.”

28. “The only very marked difference between the average civilized man and the average savage is that the one is gilded and the other is painted.”

Mark Twain Quotes to Live By

29. “Always do what is right. It will gratify half of mankind and astound the other.”

31. “Never tell the truth to people who are not worthy of it.”

33. “Keep away from people who try to belittle your ambitions. Small people always do that, but the really great ones make you feel that you, too, can become great.”

34. “The fear of death follows from the fear of life. A man who lives fully is prepared to die at any time.”

36. “Don’t part with your illusions. When they are gone, you may still exist, but you have ceased to live.”

37. “When we remember we are all mad, the mysteries disappear and life stands explained.”

38. “Good friends, good books, and a sleepy conscience: this is the ideal life.”

39. “When you fish for love, bait with your heart, not your brain.”

40. “Never allow someone to be your priority while allowing yourself to be their option.”

41. “You can’t reason with your heart; it has its own laws and thumps about things which the intellect scorns.”

42. “To get the full value of joy you must have someone to divide it with.”

45. “A clear conscience is the sure sign of a bad memory.”

46. “Sanity and happiness are an impossible combination.”

47. “Books are for people who wish they were somewhere else.”

48. “Wrinkles should merely indicate where the smiles have been.”

50. “Always obey your parents when they are present.”

51. “The funniest things are the forbidden.”

53. “I did not attend his funeral, but I sent a nice letter saying I approved of it.”

55. “Go to Heaven for the climate, Hell for the company.”

56. “The man who does not read has no advantage over the man who cannot read.”

57. “A full belly is little worth where the mind is starved.”

58. “Books are the liberated spirits of men.”

60. “Laughter without a tinge of philosophy is but a sneeze of humor. Genuine humor is replete with wisdom.”

61. “Whenever you find yourself on the side of the majority, it is time to reform—or pause and reflect.”

63. “Loyalty to country, always. Loyalty to the government, when it deserves it.”

64. “God created war so that Americans would learn geography.”

Mark Twain Quotes That Zoom in on Travel

65. “I have found out there ain’t no surer way to find out whether you like people or hate them than to travel with them.”

66. “Travel is fatal to prejudice, bigotry, and narrow-mindedness, and many of our people need it sorely on these accounts. Broad, wholesome, charitable views of men and things cannot be acquired by vegetating in one little corner of the earth all one’s lifetime.”

67. “It liberates the vandal to travel—you never saw a bigoted, opinionated, stubborn, narrow-minded, self-conceited, almighty mean man in your life but he had stuck in one place since he was born and thought God made the world and dyspepsia and bile for his especial comfort and satisfaction.”

68. “The man with a new idea is a crank until the idea succeeds.”

Have You Read Any of Mark Twain’s Works?

Mark Twain’s words immortalized in his books give us an incredibly detailed image of history and his past experiences. He lived through an America going through many changes and developments—from the end of slavery, industrialization, technological advancements, and more. He was opinionated about the things he experienced and left them in his incredible works.

He was radical and revolutionary, often challenging the ideals set upon society. Through him, we learn that though life is a mixture of many chance events, we also have the power strong enough to cast a domino effect. We can tilt the balance toward what is right, just, and moral.

Indeed, Mark Twain is a hero in his own unique way. To change another person’s entire perspective with words—even more than a century after his death—is indeed a feat only the most remarkable thinkers can accomplish.

With that, we hope this list of the best Mark Twain quotes was able to give you insight into life, society, and everything in between. Take some of his words and use them as motivation to propel yourself forward to a life that’s lived more meaningfully, purposefully, and morally.