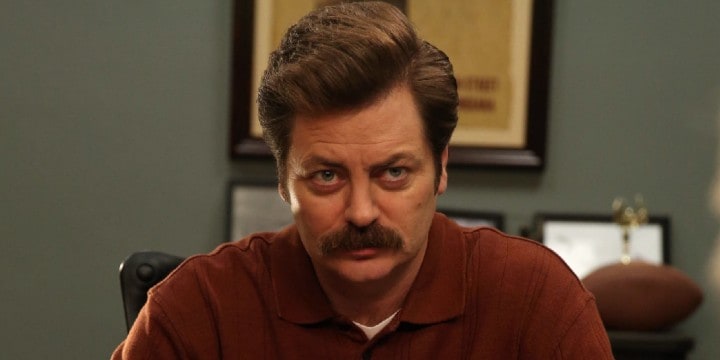 These Ron Swanson quotes give you a sneak peek into the most beloved character of television sitcom series, Parks and Recreation.

His straightforward enthusiasm and love for food, the outdoors, capitalism, and his personality are some of the things people find most charming about his character.

So, if you’re looking for some bits and pieces that will remind you of this phenomenal TV series, be sure you don’t miss out on our collection below.

And make sure to check out these Michael Scott quotes and Mr. Rogers quotes.

1. “There are only three ways to motivate people—money, fear, and hunger.”

2. “Breakfast food can serve many purposes.”

5. “Dear frozen yogurt, you are the celery of desserts. Be ice cream or be nothing.”

6. “On my deathbed, my final wish is to have my ex-wives rush to my side so I can use my dying breath to tell them both to go to hell one last time.”

7. “Clear alcohols are for rich women on diets.”

8. “Great job, everyone. The reception will be held in each of our individual houses, alone.”

9. “There’s only one thing I hate more than lying—skim milk. Which is water that is lying about being milk.”

10. “Crying—acceptable at funerals and the Grand Canyon.”

11. “I’d wish you the best of luck but I believe luck is a concept created by the weak to explain their failures.”

12. “Normally, if given the choice between doing something and nothing, I’d choose to do nothing. But I will do something if it helps someone else do nothing. I’d work all night, if it meant nothing got done.”

13. “Under my tutelage, you will grow from boys to men. From men into gladiators. And from gladiators into Swansons.”

15. “Tom put all my records into this rectangle. The songs just play one after the other. This is an excellent rectangle.”

16. “Any dog under fifty pounds is a cat, and cats are useless.”

18. “The key to burning an ex-wife effigy is to dip it in paraffin wax and then toss the flaming bottle of isopropyl alcohol from a safe distance. Do not stand too close when you light an ex-wife effigy.”

19. “Friends—one to three is sufficient.”

21. “Fishing is for sport only. Fish meat is practically a vegetable.”

23. “I call this turf ‘n’ turf. It’s a 16-ounce T-bone and a 24-ounce porterhouse. Also, whiskey and a cigar. I am going to consume all of this at the same time because I am a free American.”

24. “I’m a simple man. I like pretty, dark-haired women and breakfast food.”

25. “If there were more food and fewer people, this would be a perfect party.”

29. “Strippers do nothing for me, but I will take a free breakfast buffet anytime, anyplace.”

30. “There has never been a sadness that can’t be cured by breakfast food.”

31. “You’ve accidentally given me the food that my food eats.”

34. “In my opinion, not enough people have looked their dinner in the eyes and considered the circle of life.”

36. “Veganism is the sad result of a morally corrupt mind. Reconsider your life.”

37. “An ideal night out, to me, is stepping onto my porch area and grilling up a thick slab of something’s flesh and then popping in a highlight reel from the WNBA.”

38. “Barbecues should be about one thing—good shared meat.”

41. “Fishing relaxes me. It’s like yoga, except I still get to kill something.”

43. “That is a canvas sheet—the most versatile object known to man. It can be used to make tents, backpacks, shoes, stretchers, sails, tarpaulins, and I suppose, in the most dire of circumstances, it can be a surface on which to make art.”

48. “Straight down the middle. No hook, no spin, no fuss. Anything more and this becomes figure skating.”

49. “If any of you need anything at all, too bad. Deal with your problems yourselves, like adults.”

50. “No home is complete without a proper toolbox. Here’s April and Andy’s—a hammer, a half-eaten pretzel, a baseball card, some cartridge that says Sonic and Hedgehog, a scissor half, a flashlight filled with jelly beans.”

51. “I have accrued two hundred and twenty five personal days. Starting right now I’m using all of them. While I’m gone you’re in charge. Also, I keep a sizable supply of ground chuck in my desk. Remove it or it will begin to smell. Godspeed.”

52. “I have a hernia. I’ve had it for a while, and I’ve been ignoring it successfully. But this morning, I made the mistake of sneezing. But as long as I sit still and don’t move my head or torso, I’m good. I got this.”

53. “Encapsulate the spirit of melancholy. Easy. Boom, a sad desk. Boom, sad wall. It’s art. Anything is anything.”

54. “I would rather bleed out than sit here and talk about my feelings for ten minutes.”

55. “I prefer quality over flash—that’s why I refuse to write my signature in cursive.”

56. “Live your life how you want, but don’t confuse drama with happiness.”

58. “Keep your tears in your eyes—where they belong.”

59. “Put some alcohol in your mouth to block words from coming out.”

60. “My idea of a perfect government is one guy who sits in a small room at a desk, and the only thing he’s allowed to decide is who to nuke. The man is chosen based on some kind of IQ test, and maybe also a physical tournament, like a decathlon. And women are brought to him, maybe when he desires them.”

61. “Capitalism—God’s way of determining who is smart and who is poor.”

62. “Birthdays were invented by Hallmark to sell cards.”

63. “Give a man a fish and feed him for a day. Don’t teach a man to fish and feed yourself. He’s a grown man, and fishing’s not that hard.”

64. “America—the only country that matters. If you want to experience other cultures, use an atlas or a ham radio.”

65. “The government is a greedy piglet that suckles on a taxpayer’s teat until they have sore, chapped nipples.”

66. “Why the government is involved in an art show is beyond me. I also think it’s pointless for a human to paint scenes of nature when they could just go outside and stand in it.”

67. “Busy? Impossible. I work for the government.”

69. “Capitalism is the only way. It makes America great, England okay, and France terrible.”

70. “The less I know about other people’s affairs, the happier I am.”

71. “I once worked with a guy for three years and never learned his name. Best friend I ever had. We still never talk sometimes.”

72. “When people get too chummy with me, I like to call them by the wrong name to let them know I don’t really care about them.”

73. “So you talked to Tammy? What’s it like to stare into the eye of Satan’s butthole?”

74. “Creativity is for people with glasses who like to lie.”

75. “I don’t want to paint with a broad brush here, but every single contractor in the world is a miserable, incompetent thief.”

76. “One rage every three months is permitted. Try not to hurt anyone who doesn’t deserve it.”

78. “I’ve cried twice in my life. Once when I was 7 and hit by a school bus. And then again when I heard that little Sebastian had passed.”

80. “Do you have any history of mental illness in your family? I have an uncle who does yoga.”

82. “I like Tom. He doesn’t do a lot of work around here. He shows zero initiative. He’s not a team player. He’s never wanted to go that extra mile. Tom is exactly what I’m looking for in a government employee.”

83. “I love being a father but there are a few things I miss—silence. The absence of noise. One single moment undisturbed by the sounds of a children’s program called Doc McStuffins. There is no quiet anymore. There is only Doc McStuffins.”

84. “I work hard to make sure my department is as small and as ineffective as possible.”

86. “We will get along just fine, though hopefully not too fine, because I am not looking for any new friends. End speech.”

87. “On nights like this when the cold winds blow, the air is awash in the swirling eddies of our dreams, come with me and find safe haven in a warm bathtub full of my jazz.”

88. “My son is several weeks old. He is very familiar with the sound of power tools.”

89. “Say what you want about organized religion, but those bastards knew how to construct an edifice.”

90. “Literally everything is a weapon, son. That folder, in my hands, is far deadlier than this bow of yours.”

Did These Ron Swanson Quotes Inspire You to Keep Your Chin up and Keep Going?

TV shows and sitcoms are generally looked at as a form of entertainment—something to liven up and make your day a little bit brighter. However, there are still many things to learn from the characters of our favorite shows.

Some underlying themes from Ron Swanson include integrity, making sacrifices for those we love, and always be true to yourself. By abiding by these principles, we’re sure to live a happy and content life.

Which of these Ron Swanson quotes are your favorites? Which other characters would you like us to make a collection for? Let us know by commenting down below.